IDC is reporting today that the worldwide tablet grew 11.0% year over year in the second quarter of 2014 (2Q14) with shipments reaching 49.3 million units. Although shipments declined sequentially from 1Q14 by -1.5%, IDC believes the market will experience positive but slower growth in 2014 compared to the previous year. As for Apple, they remain the number one tablet vendor in the world with close to 27% market share for Q2.

Jean Philippe Bouchard, IDC Research Director for Tablets stated in their report that "As we indicated last quarter, the market is still being impacted by the rise of large-screen smartphones and longer than anticipated ownership cycles. We can also attribute the market deceleration to slow commercial adoption of tablets."

IDC's report further noted that "Despite this trend, we believe that stronger commercial demand for tablets in the second half of 2014 will help the market grow and that we will see more enterprise-specific offerings, as illustrated by the Apple and IBM partnership, come to market." 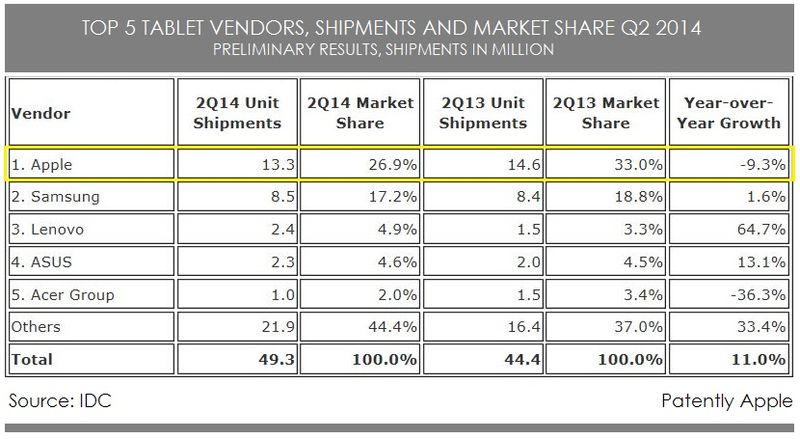 Despite declining shipments of its iPad product line, Apple managed to maintain its lead in the worldwide tablet market, shipping 13.3 million units in the second quarter.

Following a strong first quarter, Samsung struggled to maintain its momentum and saw its market share slip to 17.2% in the second quarter. Lenovo continued to climb the rankings ladder, surpassing ASUS and moving into the third spot in the tablet market, shipping 2.4 million units and grabbing 4.9% markets share. The top 5 was rounded out by ASUS and Acer, with 4.6% and 2.0% share, respectively.

Share outside the top 5 grew to an all-time high as more and more vendors have made inroads in the tablet space. By now most traditional PC and phone vendors have at least one tablet model in the market, and strategies to move bundled devices and promotional offerings have slowly gained momentum.

Jitesh Ubrani, Research Analyst, Worldwide Quarterly Tablet Tracker stated that "Now we are seeing growth amongst the smaller vendors and a levelling of shares across more vendors as the market enters a new phase."

I wouldn't put too much stock into the power of smaller vendors moving to a "new phase" in tablets just yet. Beyond Apple's landmark partnership with IBM, we reported this week that "Apple's CEO is sharply focused on the iPad with Hints of Significant Innovation on the Way." It's Apple that created this new category and it'll be Apple that will take the iPad to a new level in the not-too-distant future. For now, Apple remains the number one tablet vendor in the world.