In early 2013 we reported that Apple had recruited a former senior researcher at LG Display, Dr. Lee Jeung-jil, who was in charge of researching OLED printing technology. So it's obvious that Apple is staying on top of this technology so that they can bring this to market when the time is right. To date Apple has several OLED inventions on record (One, two and three). Apple's current invention clearly acknowledges that OLED has better contrast ratios compared to LCDs while continuing to invent supporting technologies to correct certain OLED weaknesses and/or to fine tune the technology for specific applications or devices. Today's patent application relates to processes for realizing a variable optical path length for one or more microcavities in an AMOLED display. In the shorter term, we reported earlier this week that Apple placed orders for new power reducing Oxide LCD Displays for next year's iPad Air.

According to Apple, AMOLED displays are self-emissive devices, and do not require backlights. AMOLED displays may also provide more vivid colors and a larger color gamut than the conventional LCDs. Further, AMOLED displays can be made more flexible, thinner, and lighter than a typical LCD.

AMOLEDs can either be a bottom emission type or a top emission type. In bottom emission OLEDs, the light is extracted from an anode side. In such embodiments, the anode is generally transparent, while a cathode is generally reflective. The pixel area is shared between the OLED and a backplane driving circuit that includes thin film transistors (TFT), metal routing and capacitors. The driving circuit may contain a few TFTs, for example, three to five TFTs, with few control signals, and one or two capacitors. As a result, the area available for OLED is limited such that an OLED aperture is small.

Apple's invention also provides methods for achieving different thicknesses of the tuning layer without using extra masking operations or with only one extra masking operation, when compared to conventional fabrication techniques. For example, a shadow mask may be used for depositing the OLED layer. Methods described herein may use the same shadow mask for depositing the tuning layer. This method is much simpler than a conventional process which generally requires four extra masks in order to deposit a second ITO layer having different thicknesses for different sub-pixels. 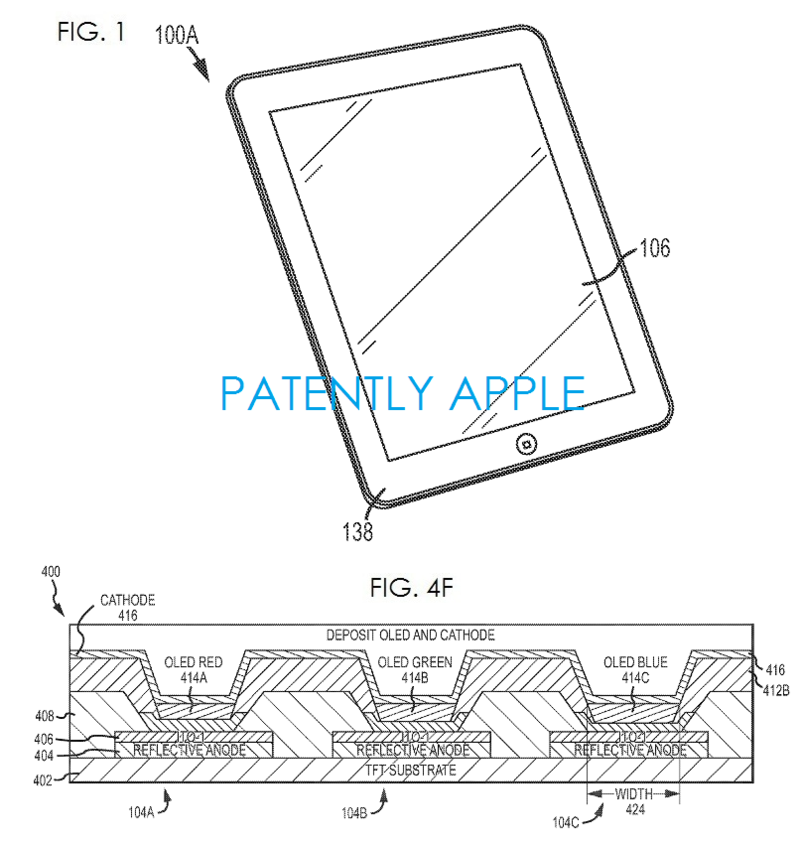 Apple's patent FIG. 1A noted above illustrates a perspective view of a sample electronic device such as an iPad which includes a touch screen display which incorporates a cover glass 106 and an AMOLED display behind the cover glass. Apple's patent FIG. 4F shows a cross-sectional view of a process architecture including light emitting layer deposition and common electrode deposition for the top emission OLED display.

If you're interested in the finer details of Apple's complicated OLED related invention, see patent application 20140203245.

Apple credits Vasudha Gupta, Young Bae Park and Shih Chang Chang (yes double Chang) as the inventors of this patent application which was originally filed in Q1 2013. Considering that this is a patent application, the timing of such a product to market is unknown at this time.

LG Wins a Great Design Patent for a Hybrid Phone-Watch