Apple May Advance their "Find My iPhone" Security Feature

On July 17, 2014, the US Patent & Trademark Office published a patent application from Apple that reveals a possible future "Find My iPhone" security feature. The invention is intended to allow the finder of a lost iDevice to initiate a communication with a particular contact stored in the device by bypassing the device's security scheme. In April we posted a report titled "Apple Agrees to Provide a Kill Switch on iPhones in 2015." The report noted that in San Francisco 60% of all robberies involved the theft of a mobile device and in neighboring Oakland it was up to a whopping 75%. The report noted that legislation had been tabled in California to force tech companies to do more to secure mobile devices and its contents. Apple currently provides mobile device users with a feature called "Find My iPhone." This current patent application marks Apple's third security related patent of the day. The other two security related features were covered in our first report titled "Apple Invents Wildly Advanced Bumping Technology."

However, this mechanism only works if the device owner returns to the correct establishment and the employee is honest enough to return the device. Nevertheless, it is very difficult or impossible for an honest finder of a lost device with a security authentication scheme enabled to proactively attempt to locate the owner of the device to facilitate returning the device to its owner.

Apple's invention advances their current "Find My iPhone" security feature. The invention will allow the finder of a lost iDevice to initiate a communication with a particular contact stored in the device by bypassing the device's security scheme. 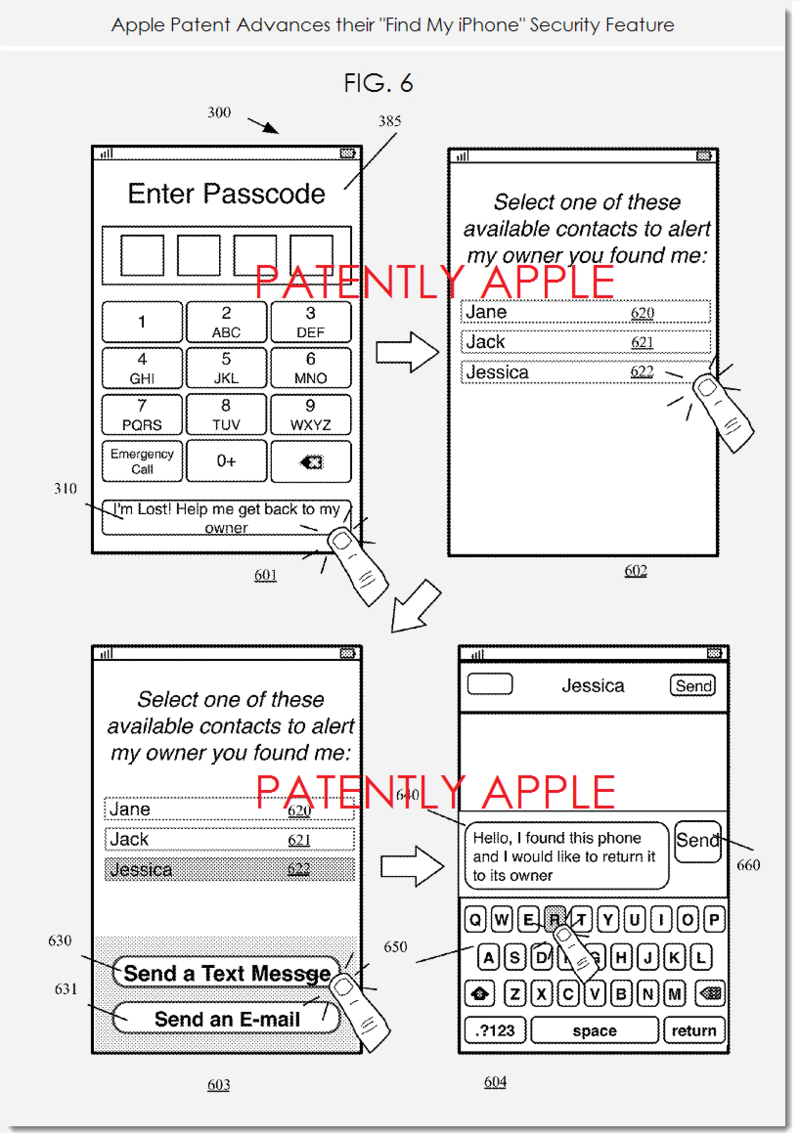 In Apple's patent FIG. 6 noted above we're able to see an exemplary interface for initiating short message service (SMS) communication with a privileged contact by user interaction with device's display area of some embodiments. In this example, the device is initiating an email with a pre-selected privileged contact. Patent FIG. 6 illustrates a user's interaction with the device in four stages 601-604.

The first stage #601 illustrates receiving a selection of UI item #310 on the device which bypasses the device's security scheme to enter a limited access mode for initiating contact with at least one preselected contact. Some embodiments display the interface of the first stage after receiving a user interaction with the device to unlock the device following a period of device inactivity.

The Fourth Stage #604 illustrates that the text message interface includes a display area #640 for displaying text, keypad #650 for entering text, and UI item #660 for initiating transmission of the text displayed in display area. The display area is pre populated with a message and/or the device receives entry of a custom message from user interaction with keypad. Once the message is complete, the device receives a selection of UI item to send the text in display area as a text message using the stored phone number associated with the selected contact. In some embodiments, this message is sent as an SMS message. Other embodiments transmit this message using multimedia messaging service (MMS) or another method of transmitting text messages.