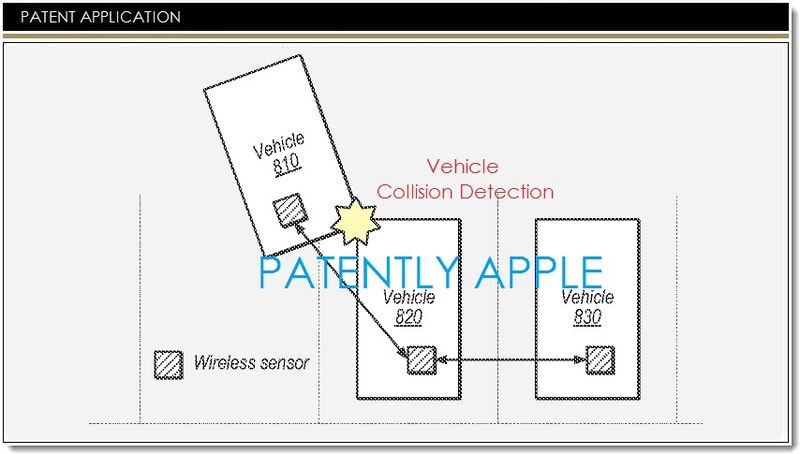 On July 17, 2014, the US Patent & Trademark Office published a patent application from Apple titled "Bump or Close Proximity Triggered Wireless Technology." Although Apple's Sr. VP of Software Engineering Craig Federighi made light of Samsung's bumping technology during his 2013 WWDC keynote segment introducing "AirDrop" by saying that there was no need to wander around the room bumping your phone with others in order to share photos and so forth, the fact is that bumping technology was long established in previous Apple inventions going back to 2009. Today, Apple takes bumping technology to newly advanced levels. Although Apple notes that it does use peer-to-peer Wi-Fi Direct like with AirDrop in some cases, they also note that they use many other communication standards that could be applied to a wide range of future applications such as e-Commerce, in-vehicle applications and into wild new areas involving vehicle collisions, theft and beyond.

Wireless communications may utilize various security protocols. Such protocols may prevent unauthorized access to a wireless network, for example. In some situations, it may be desirable to allow some nearby users to access to the network without using the security protocol or automatically authenticate a user's wireless device using the security protocol. For example, two individuals may desire to quickly transfer contact information between their respective mobile devices. As another example, an apartment owner may desire to avoid the time required to find and type a relatively long password to allow guests to access his or her local network, but may also desire to exclude other users in nearby apartments from using the local network.

Further, wireless sensors may be present in many situations where transfer of data could be used to improve security of mobile property. For example, many vehicles include wireless sensors, such as Bluetooth sensors, Zigbee sensors, IEEE 802.11p sensors, and so on. Transfer of data between such sensors may be desirable in order to identify those responsible for vehicle collisions or thefts.

In various situations, it may be desirable to automatically: initiate a connection, authenticate, transfer data, and/or bypass security protocols between wireless mobile devices.

Apple clarifies User Equipment (UE) (or "UE Device") as being any of various types of computer systems devices which are mobile or portable and which performs wireless communications. Examples of UE devices include mobile telephones or smart phones (e.g., iPhone, Android based phones), portable gaming devices (e.g., Nintendo DS, PlayStation Portable, Gameboy Advance, iPhone), laptops, PDAs, portable Internet devices, music players, data storage devices, or other handheld devices, etc. In general, the term "UE" or "UE device" can be broadly defined to encompass any electronic, computing, and/or telecommunications device (or combination of devices) which is easily transported by a user and capable of wireless communication.

In a specific example, Apple notes that there are various situations in which entering a password, selecting a nearby device to communicate with, and/or manually initiating a data transfer may be inconvenient. These situations include guests desiring to access a local wireless network, friends who want to quickly transfer particular data between UEs, and users of various devices desiring to trigger various device functionalities, for example.

In Apple's patent FIG. 3 above we're able to see an embodiment of a methodology for initiating communication between a wireless access point (WAP) and a UE. In the illustrated embodiment, UE 106 is tapped to WAP 103 (i.e., brought into close proximity with WAP 103 and/or bumped with WAP 103). Movement of UE 106 is illustrated by the dashed lines in FIG. 3.

The techniques described above with reference to a UE and a WAP may be implemented between UEs when communication using a peer-to-peer communication methodology. For example, UE 106A and UE 106B of patent FIG. 4 may automatically authenticate or bypass a security protocol based on a tap. 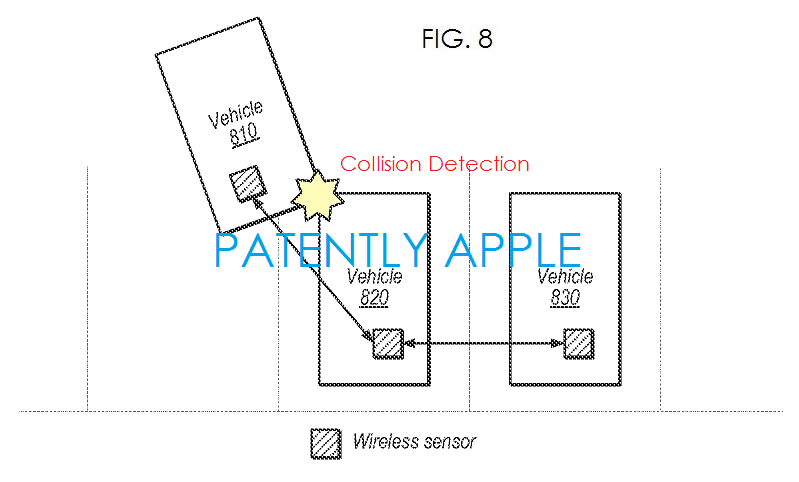 Additionally, based on a detected bump condition, one or more nearby wireless sensors may be configured to transmit information corresponding to distances between nearby wireless sensors. Using this information, a mapping of vehicles involved in an accident may be reconstructed. Thus, a motorist who causes an accident by venturing too near another vehicle may be identified, even if he or she is not affected by the accident. This could be handy for insurance companies as is the next example.

Apple's patent application also covers techniques related to automatic data transfer based on proximity and/or bump conditions may be used to determine those responsible for various security breaches.

In one embodiment, such techniques may be used to determine information regarding vehicle thefts. For example, in response to a detected a bump condition, a vehicle may transmit a request packet requesting a packet from a known UE (e.g., a UE associated with the owner of the vehicle). If the vehicle does not receive a response to the request packet (e.g., because the bump condition was caused by an intruder stealing the vehicle), the vehicle may be configured to sound an alarm and/or exchange information with nearby wireless sensors (e.g., information regarding the time of the theft and identification of nearby vehicles).

In April we posted a report titled "Apple Agrees to Provide a Kill Switch on iPhones in 2015." In that report we noted that "The prosecutors said in a joint statement that 'While CTIA's decision to respond to our call for action by announcing a new voluntary commitment to make theft-deterrent features available on smartphones is a welcome step forward, it falls short of what is needed to effectively end the epidemic of smartphone theft.'"

Apple currently provides their iPhone customers with the feature called "Find My iPhone." In today's patent application noted above we see that Apple is thinking of new ways to thwart thieves and in fact, there's a second patent covering security today under the title "Generating Notifications based on User Behavior."

Apple notes in that second patent filing that "By comparing the current behavior data to behavior patterns, the system may protect against misappropriation or theft of the user device as well as unanticipated incidents or atypical events."

Additional Techniques based on Bump and/or Proximity Detection

Apple notes that in some embodiments, a UE or access point is configured to perform further functions in response to bump and/or proximity detection. For example in one embodiment, a UE such as a laptop computer is configured to skip a password entry step during user logon in response to detecting bump or proximity of another UE of the user, such as a mobile phone, for example. In this example, a prior authentication between the laptop and the mobile phone may map the two devices, e.g., by transferring a key. Thus, based on detecting a bump or proximity by the known mobile phone, the laptop may be configured to skip a password entry step. In other embodiments, other actions may be performed, such as executing a particular software application, backup of data, etc.

Similarly, after authenticating a device (e.g., for a first time) based on bump and/or proximity, an access point or UE may be configured to recognize the device at a later point in time and authenticate without bump and/or proximity. For example, the access point or UE may exchange a shared key with the device, or store an ID associated with the device. In one exemplary embodiment, a UE included in a vehicle is configured to communicate with another UE (e.g., a mobile phone) based on an initial tap between the vehicle UE and the other UE.

Apple credits Devrim Varoglu, Gencer Cili (Systems Engineer, Cellular Technologies at Apple, ex-BlackBerry software developer) and Ravisastry Parupudi as the inventors of patent application20140199967 which was originally filed in Q1 2013. Considering that this is a patent application, the timing of such a product to market is unknown at this time.