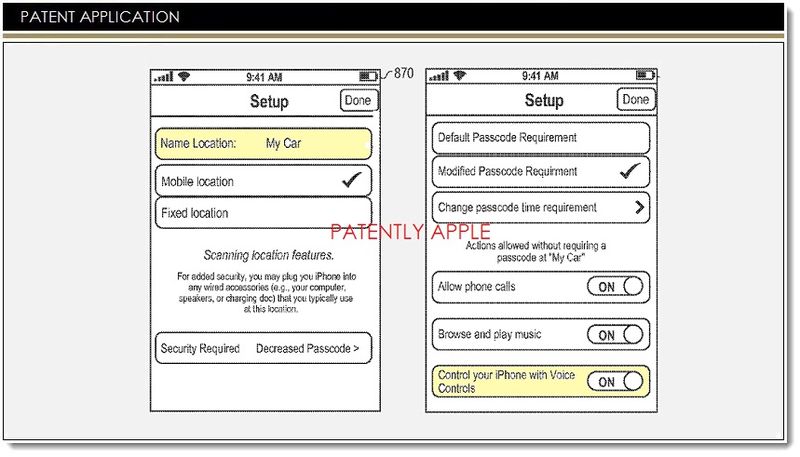 On July 3, 2014, the US Patent & Trademark Office published another security related patent application from Apple. Apple's first security invention published earlier today revealed a "Dual-Factor Authentication System for the iTunes Store." In this second security-centric patent application, Apple reveals advanced security based on location. Apple covers "fixed locations" like your home or Office and "mobile locations" like when you're shopping, at a coffee shop or inside your car (or other vehicles). The specific system designed for the car is obviously going to be a part of Apple's forthcoming CarPlay. Whether Apple will roll the fixed location interfaces into their forthcoming "Home" app is not known at this time. Intelligent location-based security will be able to change your security settings on the fly.

Mobile devices, such as smart phones, tablet computers, media players, and the like, have become ubiquitous. People are ever more reliant on mobile devices for their day-to-day activities. Often, sensitive or private information is accessible from mobile devices. Mobile devices can also be used to make purchases from online and brick-and-mortar merchants. Users may want to limit the use of their mobile devices by unauthorized individuals, such as children or other third parties. To prevent against unauthorized access, mobile devices often have security requirements for authentication.

One example of a security requirement is a password or passcode. For example, a passcode requirement can be enabled on an iPhone commercially available from Apple Inc. When enabled, a passcode may be required immediately upon the iPhone entering a lock-screen state or after a predetermined time of inactivity (e.g., 1 minute, 5 minutes, 15 minutes, 1 hour, etc.). Shorter times are typically more secure. There may be different types of passcodes. For example, the passcode can be a simple 4-digit numerical password or a longer alphanumeric password. Longer passcodes with a combination of characters and special characters are typically more secure. However, longer and more complex passcodes are more difficult for a user to enter. Frequent or unnecessary requests to the user for authentication can be burdensome and harm the user experience.

Apple's invention generally relates to location services and in particular location-sensitive security levels and setting profiles based on detected location.

To provide a reliably pleasant and secure experience for a user operating a mobile device, it can be desirable to modify security settings or other device behavior based on a detected location. Mobile device users often frequent the same locations. Mobile devices can be configured to detect the current location. Based on the detected current location, the mobile device can modify settings and configurations. Security settings are one example of device behavior that can be modified in accordance with embodiments of the present invention. 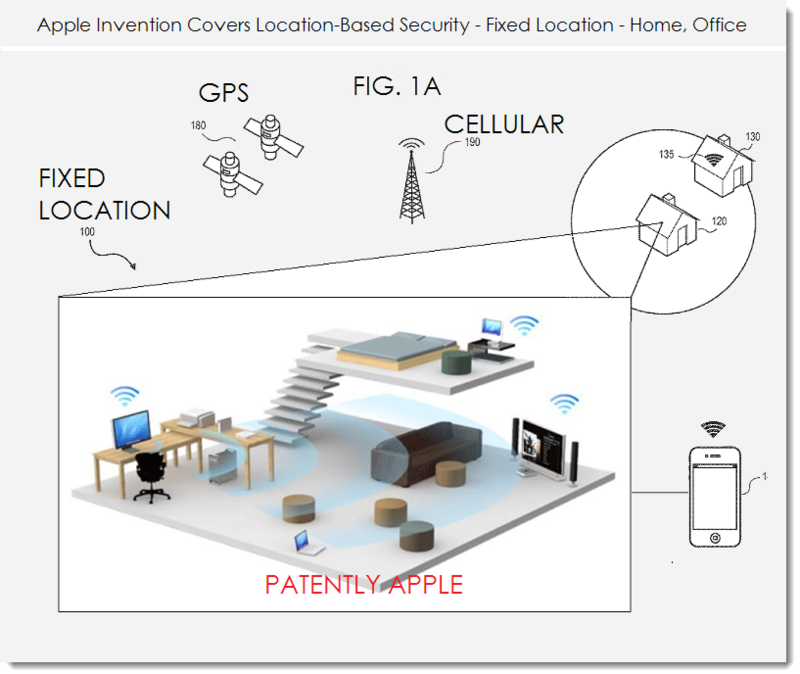 Apple's patent FIG. 1A noted above is a diagram of a system 100 at a fixed location according to an embodiment of the present invention. Various electronic devices can be located in a structure 120, such as a house, building or a room. This would be considered a fixed location.

Mobile devices often have security requirements, such as passwords or passcodes. Security requirements help ensure that a mobile device is in the hands of the appropriate party. Often the security level remains the same regardless of the location of the mobile device. Because some locations may be inherently more secure, such as a user's home or office, these locations may be considered "safe" and require less stringent security.

It can be desirable to have decreased security requirements when the mobile device is at a secure location. Conversely, some locations may be considered higher risk or "unsecure." In these locations, it can be desirable to implement stronger security protections. When the mobile device is in an unsecure location (e.g., public location such as cafes or shopping centers), security requirements can be increased.

A mobile device can detect a current location and implement security settings that correspond to the detected location. The current location may be detected by analyzing location aspects, where a "location aspect" can include any parameter or attribute that assists in determining a location of a mobile device, including: geographic location coordinates; connected or visible networks and devices; characteristics of devices or networks that are visible to the mobile device; the presence of other devices nearby; physical connection to other devices; environmental characteristics of the location; or other features of the location.

Apple's patent FIGS. 5B and 5C noted below are simplified tables of location aspects at certain locations and information for correlating location contexts to security levels, respectively, in accordance an embodiment of the present invention. 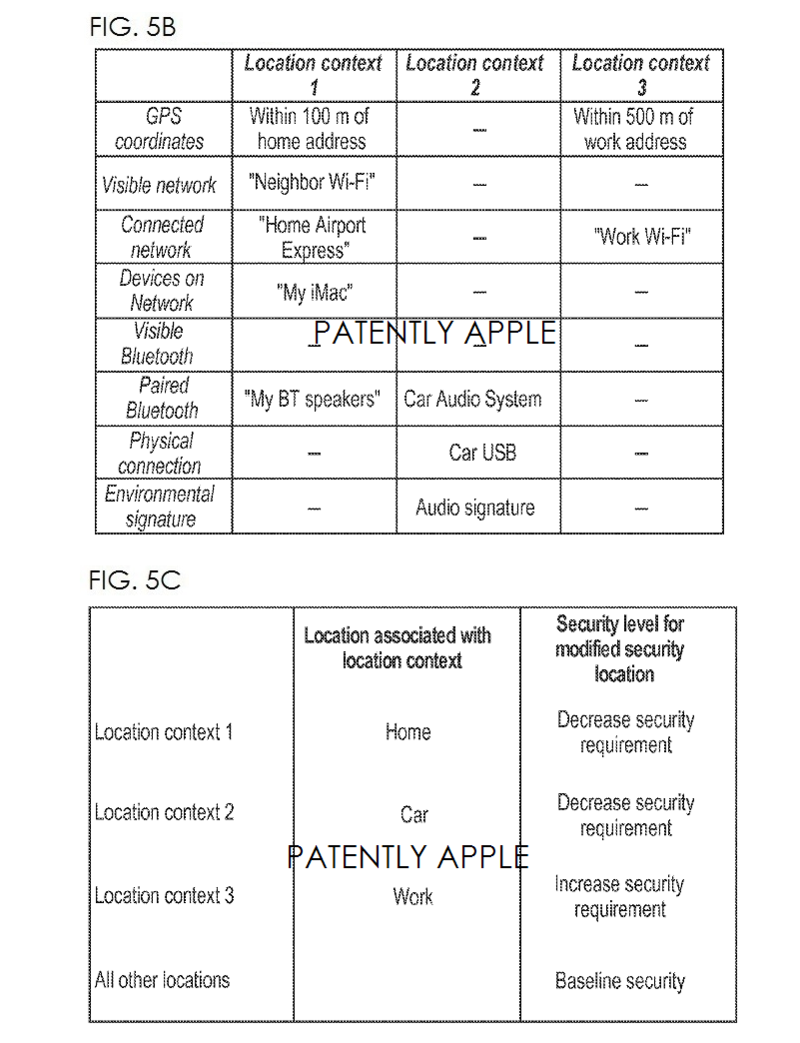 Apple notes that in some embodiments, the "location" of a mobile device need not refer to a fixed location (such as a home or office) but can also include a location that is mobile, such as when the mobile device is inside of a moving vehicle. In patent FIG. 2 noted above we're able to see a system according to an embodiment where the location is mobile, in this case the user's car 210.

Apple further notes that the system relating to a vehicle may include an iPhone and vehicle systems 250 – that is likely to be non-other than Apple's new CarPlay when in your car.

However, the mobile location-based security will be able to apply to other vehicles such as a bus, train, airplane, boat, or the like. The vehicle such as your car could include a wired or wireless network 215 and vehicle systems and subsystems 250. The Vehicle systems can include a navigation system 252, an audio system 254, a dashboard/engine system 256 and other future components.

Patent FIGS. 8C and 9A cover user interface for setting up location-based security for when you're in your car (or other vehicle) including using Siri for controlling your iPhone features and content.

For example, security measures based on what the user knows include passwords, passcodes, passphrases or other challenges (e.g., name of your first pet).

Security measures based on what the user has include physical objects that identify a user based on the user's demonstrated possession of an object (e.g., keyfobs, smartcards, etc.).

Security measures based on what the user is include DNA, fingerprints, retinal scans, voice identification, cadence of typing, walking, talking, and other biometric identification methods.

Apple credits Alexander Reitter, David Amm, Julian Missig and Raymond Walsh as the inventors of patent application 20140187200 which was originally filed in Q4 2012. Considering that this is a patent application, the timing of such a product to market is unknown at this time.