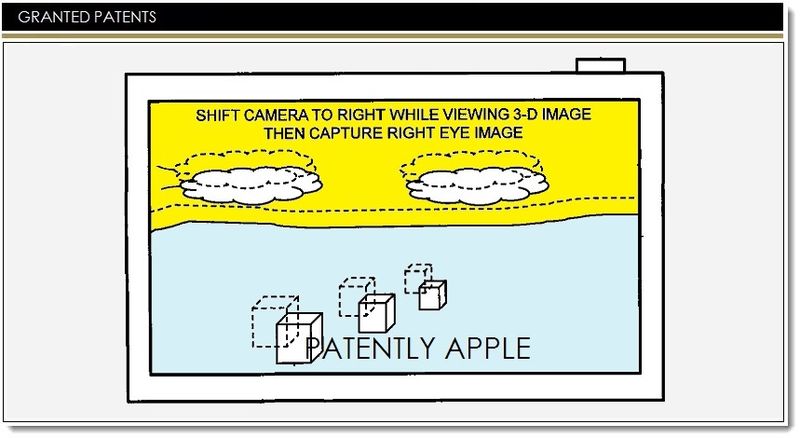 The US Patent and Trademark Office officially published a series of 46 newly granted patents for Apple Inc. today. In this particular report we cover two key patents. The first covers an advanced haptics system for iDevices. The second is for a new 3D camera system that could apply to future iDevices and/or a standalone camera. In April we posted a report titled "Future High-End Android Smartphones with 3D Cameras will be using Apple's PrimeSense Technology." It now appears that Apple has their own surprise in the works. Between PrimeSense's 3D camera technology and acquiring an advanced 3D camera patent from one of the leading experts in this field, Apple is out to challenge Android OEMs on this front in the not-too-distant future. Our report also covers five new design patent wins and we wrap up this week's granted patent report with our traditional listing of the remaining granted patents that were issued to Apple today.

Apple has been granted a patent today for an invention relating to the field of digital cameras, and more particularly to a digital camera which captures stereoscopic or 3D images. While Apple is noted as being the assignee on this granted patent, it appears that Apple has acquired this patent form inventor Ken Parulski who is widely recognized as a digital photography pioneer and inventor of more than 200 issued patents. Parulski's patents are broadly licensed with earnings for his company aKAP Innovation in the 2 billion per annum range. Kodak and other camera companies have also acquired some of Parulski's patents.

Patent Background and Problem to Solve

Various electronic and photochemical imaging techniques have been developed that capture images of a scene taken from different perspectives in order to provide three-dimensional (3-D) images. These images are processed and displayed to a user so that one eye of an observer views an image of the scene from one perspective while the other eye of the observer views another image of the scene taken from another perspective. This creates the parallax difference necessary to produce the appearance of depth in the mind of the observer. This is known as "stereoscopic photography" or "3-D photography."

3-D images can be captured using a digital camera having multiple image sensors, such as the FinePix REAL 3D W1 digital camera available from Fujifilm Corporation of Tokyo, Japan. Such cameras are relatively expensive, however, since they typically require at least two camera lenses, image sensors, and image processors.

To reduce cost, it is known to use a camera that provides a single optical path that is moved along a fixed track, as described in U.S. Pat. No. 5,883,695 entitled "Method and Apparatus for Producing Stereoscopic Images with Single Sensor," and also U.S. Pat. No. 5,325,193 to Pritchard et al., entitled "Single Camera Autostereoscopic Imaging System." In such systems, different perspectives are captured as the camera is moved to fixed locations along the path.

In all 3-D imaging systems, the apparent depth in the scene is proportional to the extent of the parallax-induced differences between the positions of corresponding features in the presented images. The extent of such parallax-induced position differences is determined in part by the degree of separation between the captured images and in part by the distance from the captured images to the scene. Typically, 3-D imaging systems combine images that are captured at generally the same distance from the scene. This simulates the way that the eyes of a human observer will see a scene. Accordingly, the apparent extent of depth in the resultant output is typically modified by varying the degree of separation between the camera positions for the captured images. This creates an important issue for a photographer in preparing a multi-perspective image: the challenge of selecting the proper combination of camera positions necessary to provide a desired depth effect.

It is desirable to provide the photographer greater control in selecting the extent of separation between camera positions, and therefore the extent of the apparent depth in an image. This control can be provided by allowing the photographer to selectively position the camera to take individual images of the same scene from selected perspectives. These images are later reassembled to form a multi-perspective image. One difficulty in using systems and methods of this type is that it is often difficult for the photographer to know at the time of capture what effect the combination of the images captured at the different camera positions will achieve when they are eventually rendered.

However, in giving the photographer greater control, it is important to provide the photographer with the ability to predict how the resultant multi-perspective image will appear when rendered. Cameras that provide a verification system of individual images captured by a camera do not solve this problem because they are typically adapted to show only one captured image at a time.

It is known to provide a downloadable software "APP" for a smart phone, such as an Apple iPhone that displays previously captured 3-D images using an anaglyphic display method. For example, the "Anaglyph Camera" software application by Nigel Crawley Software enables a user to display two different images of a subject, captured using their iPhone's camera, as an anaglyph image.

Anaglyph images are designed to be viewed by a user wearing special 3-D anaglyph glasses having different colored filters for the two eyes (e/g/. a red filter for the left eye and a cyan filter for the right eye). After capturing the images, the user puts on a pair of 3-D anaglyph glasses to view an automatically generated anaglyph, which provides a 3-D effect. The user can then save this 3-D anaglyph image to the photo library on their iPhone, for later viewing. However, this does not enable the user to view a 3-D image during capture, since the glasses are not used until after both images are captured. As a result, it is difficult for the user to capture an image with the desired 3-D effect.

It is known to provide a digital camera using a single image sensor and two separate electronic viewfinders, one for each eye, as described in commonly-assigned U.S. Pat. No. 7,466,336 to Regan et al., entitled "Camera and method for composing multi-perspective images," which is incorporated herein by reference.

There remains a need to provide a compact, low cost, 3-D digital camera that permits a photographer to see a preview or verification representation of a 3-D image during the image composition process.

Apple's patent FIG. 1 noted below is a high-level diagram showing the components of a digital camera system. 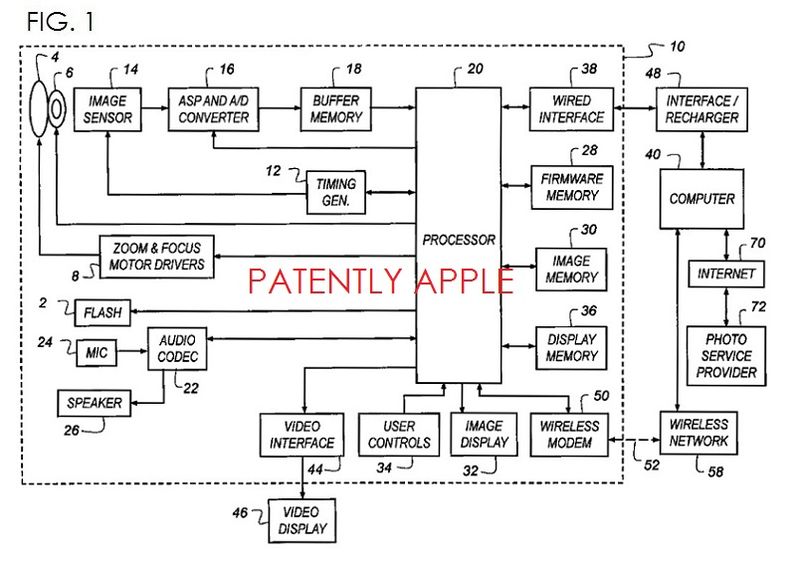 Apple's patent FIGS. 4A-4C noted below depict preview images displayed on the image display of the digital camera during the process of capturing a stereoscopic image. 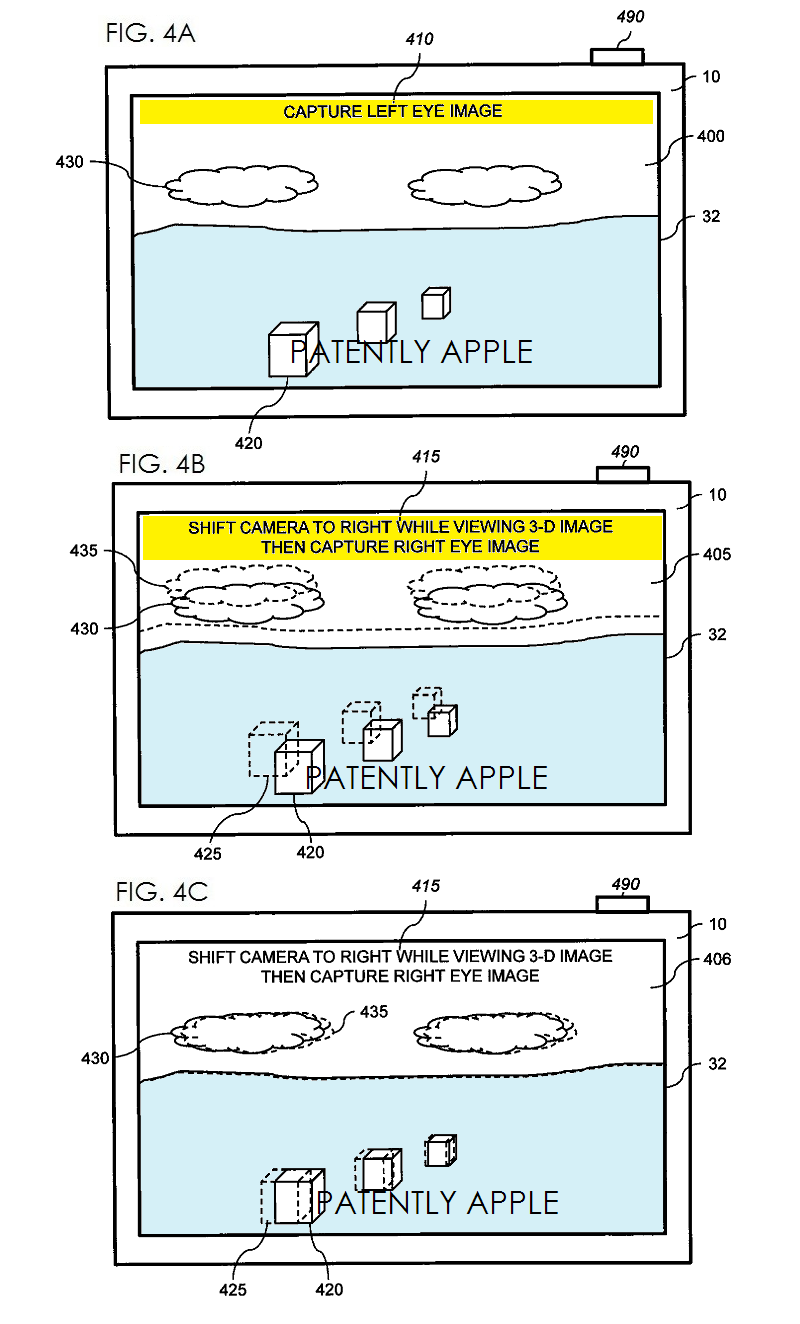 In Apple's patent FIG. 5 noted below we're able to see a flowchart showing steps for reviewing captured stereoscopic images according to one embodiment of the present invention. 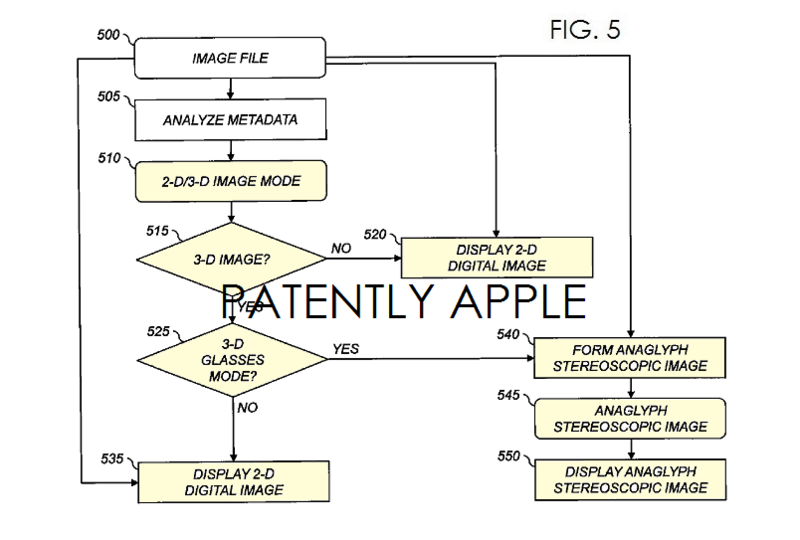 In a preferred embodiment, the camera lens is a zoom lens and is controlled by zoom and focus motor drives.

To review the finer details of this invention, see Apple's Granted Patent 8,780,180

Apple has been granted a patent today for their invention relating to "Methods and systems for providing haptic control." Patently Apple covered this invention extensively in our May 2012 patent report titled "Apple Reveals Wildly Intelligent Multi-Tiered Haptics System" 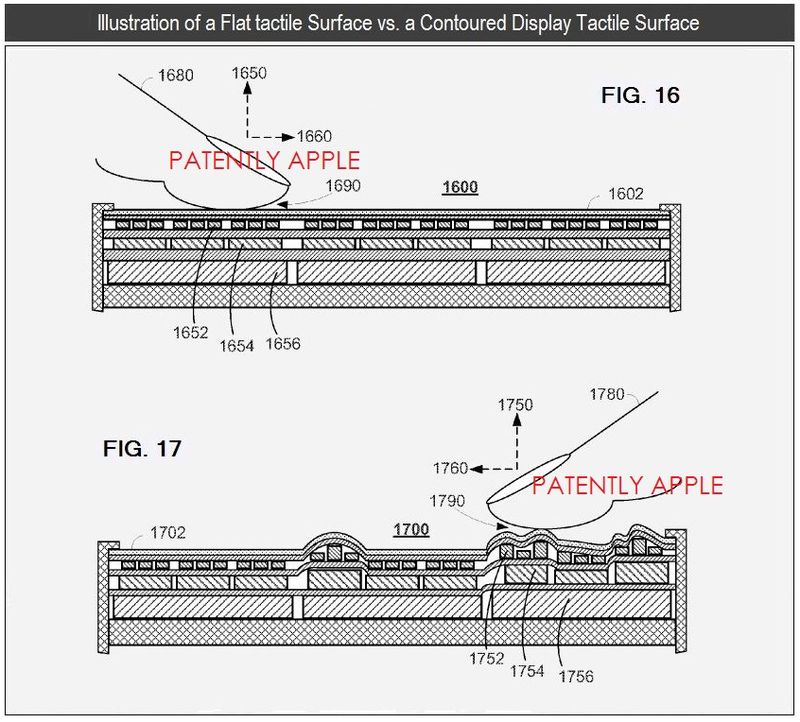 Apple credits Russell Maschmeyer and Gordon Cameron as the inventors of granted patent 8,780,060 which was originally filed in Q4 2010 and published today by the US Patent and Trademark Office. To review a more detailed account of this invention along with more graphics, see our 2012 report. 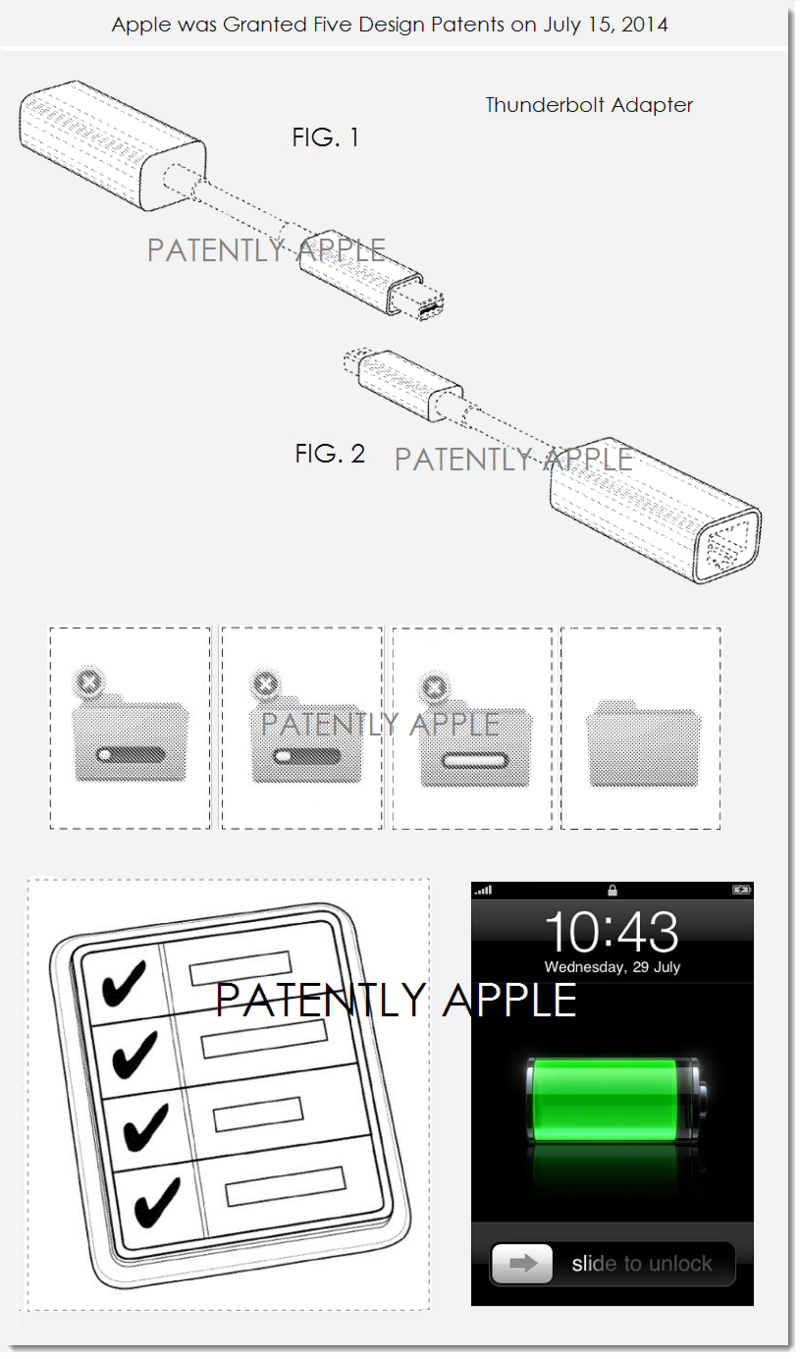 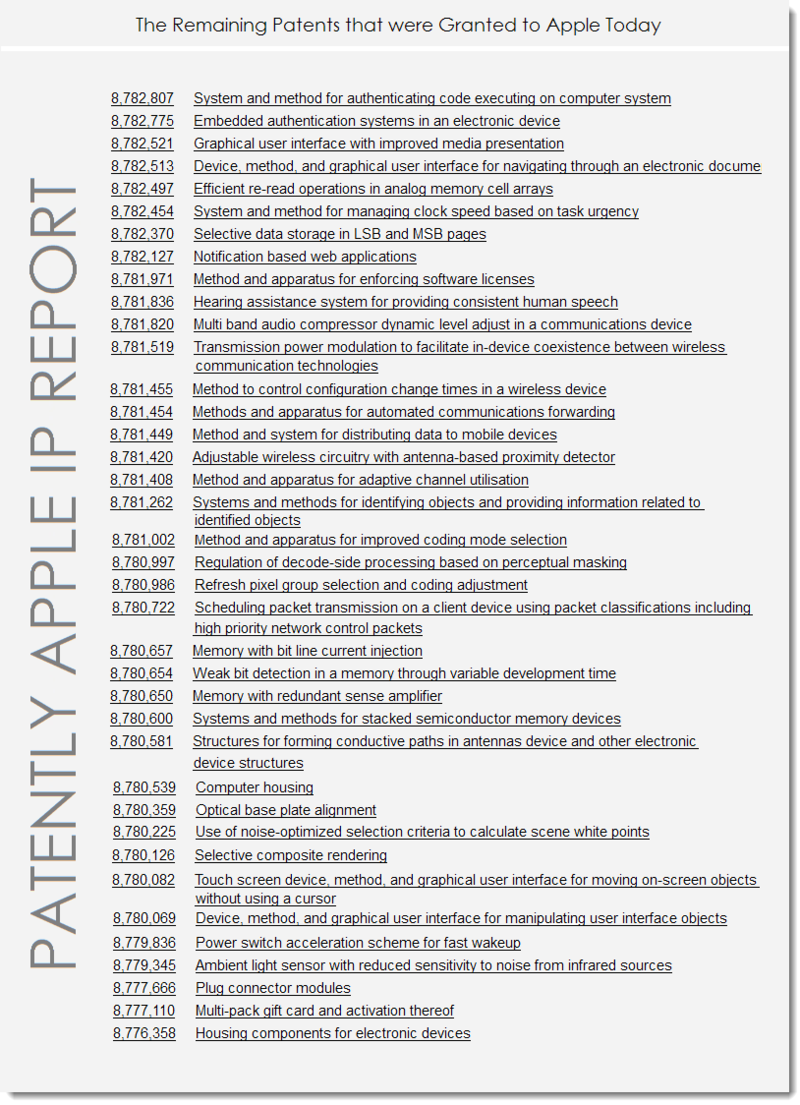