There's a reason most cheap in-ear headphones sound the way they do – they only use one driver in each ear, which limits the audio range. To get more life, more spaciousness, and more oomph out of your favorite tracks, dual-driver earbuds are the answer and Apple has offered In-Ear headphones with dual-drives for some time. A dual-driver design is also especially good for listening to high-quality audio from lossless rips, to HD videos and other high-bitrate sources. In a new patent application published today by USPTO we see Apple describing possible changes to the internal audio design as well as talk about a three-way driver for the first time. According to Apple, their new invention relates to earphones or earbuds that have multiple speaker drivers and a cross-over network.

Apple's invention relates to earphones that fit within the use's ear canal, also referred to as earbuds that have multiple speaker drivers and a cross-over network.

In one embodiment, Apple notes that an earbud cup contains a low driver housing, a middle driver housing, and a high driver housing. The three housings are arranged relative to each other such that a more compact envelope results that is able to produce sound with good fidelity. In particular, the middle and the low driver housings are stacked on top of each other in the sense that a top face of the low housing lies essentially flat against a bottom face of the middle housing, while the high housing is oriented such that its rear face is disposed adjacent to the front side of the low housing and behind an exit of a sound output tube of the middle housing. A sound output opening is formed in the front face of the high housing, but essentially no sound output tube.

In yet another embodiment, the arrangement of the driver housings and the way they fit into the boot is such that there is space to house an inertial sensor integrated circuit (e.g., a digital accelerometer chip) located below the bottom face of the low driver housing, and behind the boot. The inertial sensor may be used as part of a non-acoustic microphone to detect speech of the user wearing the earphone.

Apple's patent FIG. 2B noted below is a perspective view of the three-way driver assembly. 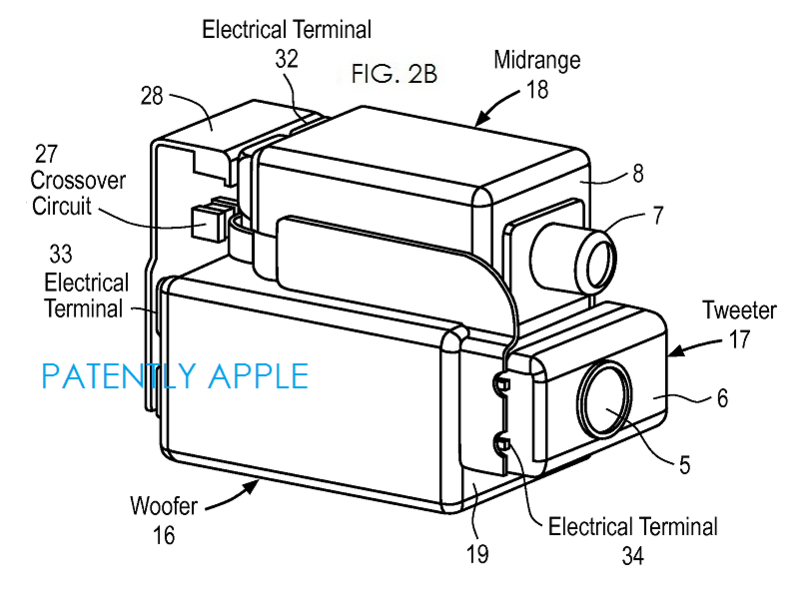 In Apple's patent FIG. 4A is a cutaway view of an assembly having three driver housings, a boot, an accelerometer and an acoustic microphone, to be installed into an earbud housing. 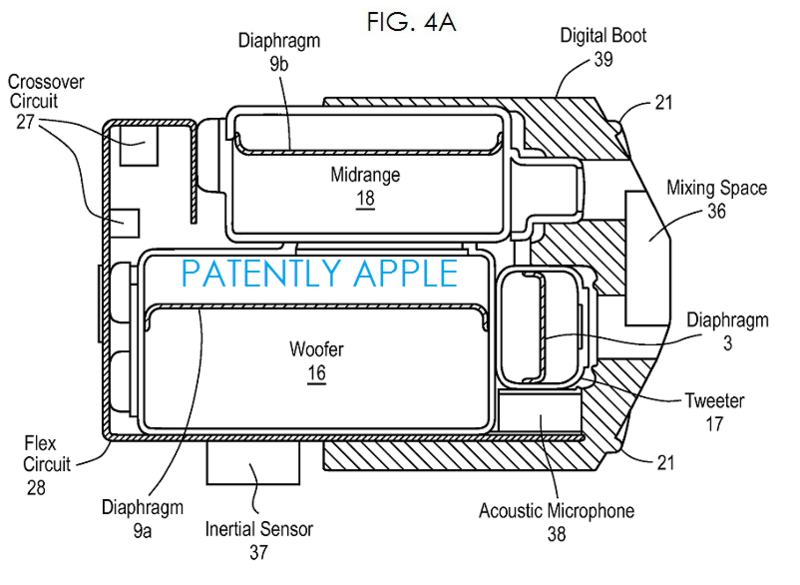 Apple's patent application is very complex but might be enjoyed by audiophiles and engineers. For more details, see Apple's patent.