Last month we posted a report titled "Going into Apple's WWDC, iOS 7 Web Traffic Reigns Supreme." In that report we showed that iOS web traffic for the iPhone was at 89.7% and iOS for the iPad was at 84.8% in North America which is exactly what developers like to see. Now a new study shows that the UK has taken the lead in iOS 7 adoption.

After examining iOS Web traffic within the UK and Australia, Chitika's latest results demonstrate the many similarities and few differences in terms of iOS version distribution between these regions and North America.

As seen below, the UK user base is on par with North America's in terms of adoption of iOS 7 on iPhones. In both regions, 89.7% of iPhone Web traffic is generated by devices running iOS 7. In Australia, this figure is slightly lower at 86.3%. 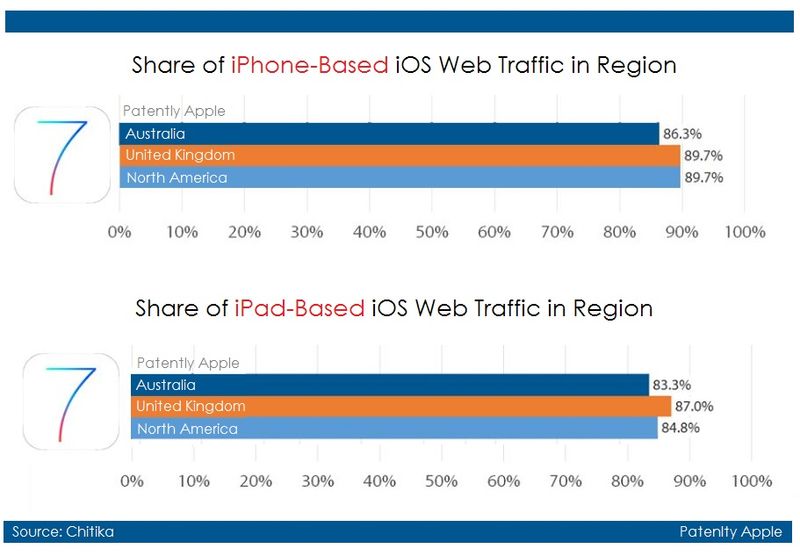 When it comes to iOS version distribution for iPad users, the UK adoption rate for iOS 7 (87.0%) is higher than what is exhibited from the North American (84.8%) and Australian (83.3%) user bases.

Additionally, app and mobile Web developers can take some solace in the noticeable similarities in iOS version distribution between North America and the UK – particularly in regards to iPhones.

Regarding Australia, its differences from the other two studied regions are slight and may change, but future studies should provide a better indication as to whether these higher rates of older iOS version usage are an ongoing characteristic of the Australian iOS user base.

The slightly greater shares for older iOS versions in Australia may be partially due to the much-publicized issues with Apple Maps in the country following the service's debut in 2012. While Apple has addressed many of these problems in the following months and years, it's possible that a small percentage of Australian users are still wary to upgrade to newer OS versions for this reason.

To quantify this study, Chitika Insights analyzed millions of UK and Australian iOS-based online ad impressions generated within the Chitika Ad Network from May 22 through May 28, 2014, the same time period utilized for a previous study focused on North American iOS users. The results were then divided into iOS version distributions for iPhone and iPad users respectively.