On May 20, 2014 we posted a report titled "Microsoft's New Surface Pro 3 Thinks it's a Notebook." In that report we noted how Microsoft's Panos Panay was hell bent on comparing their new Surface 3 tablet with Apple's MacBook Air by continually pointing to it being lighter and thinner. And because the new Surface 3 is powered by Intel Core processors it decided to call its Surface 3 a notebook replacement … a MacBook Air replacement really. Well in Asia this week, Intel played that same tune and beyond. Report Updated at 10: 44 am with video of Intel's new 3D RealSense camera in action on an Intel processor based tablet.

The Wintel of old is the Wintel of new when it comes to being obsessed with creating devices that are thinner than those sold by Apple, mainly the MacBook Air and the iPad Air. Yesterday in Taipei, Intel's Kirk Skaugen, GM of their PC Client Group, introduced their next generation mobile processor called the Core M. 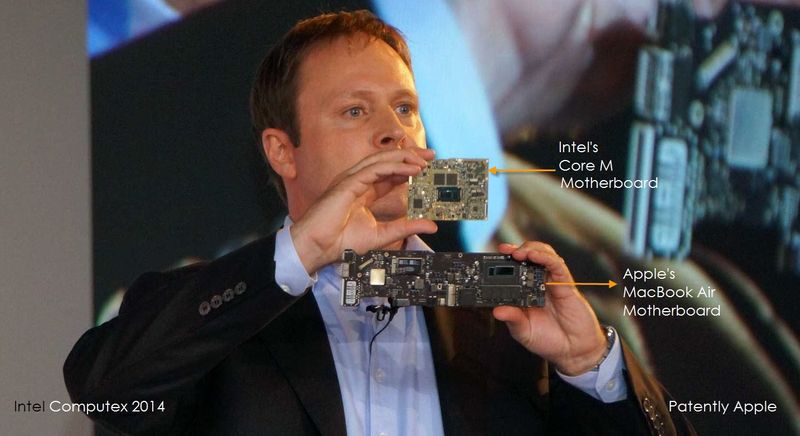 One of the reference designs discussed was that of "Llama Mountain" which is a 2-in-1 hybrid notebook-tablet design using the new Core M which supports a 12.5" Quad HD display with 2560 x 1440 resolution.

One of the key points made by Skaugen was that this new reference design is thinner than a MacBook Air or iPad Air. It only weighs 1.4 pounds and it's a fanless design unlike the MacBook Air.

Of course if Apple chooses to use the very same Core M this fall for their MacBook Air this point will be moot. Though for the sake of marketing, Skaugen is making hay while he can to charge up their hungry OEM community that wants to beat Apple's products that are selling so well. 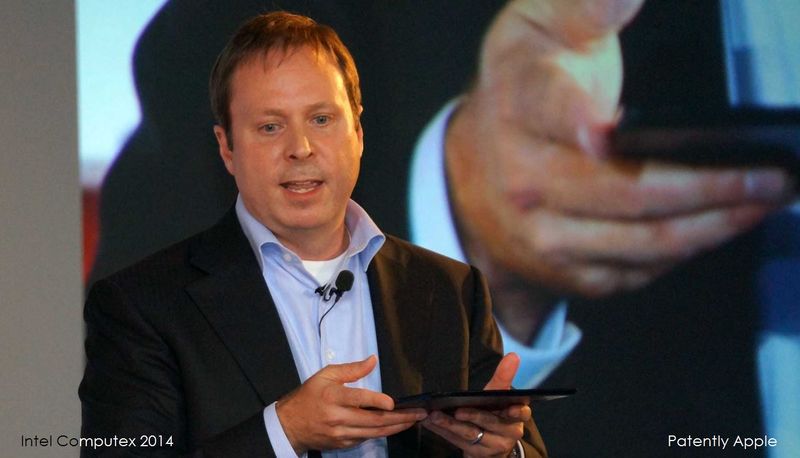 In our first photo noted above you can see Skaugen comparing the Llama Mountain motherboard to a MacBook Air motherboard to illustrate that it's less than half the size. Skaugen went on to show off their reference design in its notebook configuration as noted below – which supports a detachable display that could be operated as a standalone tablet. One last note on Core M. During Renee James' keynote she noted that Core M will deliver between 20 to 40 percent better performance than Haswell and that it was the "most energy-efficient Core processor in Intel’s history."

During this week's Computex Event, Intel revealed a number of new developments coming to market in the short to medium term. By sometime this summer, some all-in-one PC's competing with the iMac will be shipping with 4K displays for around $1,000. Additionally, standalone 4K display will be sold later this year for around $400 – which is pretty amazing.

Another development we'll see coming to market this fall are PC's integrated with Intel's slick 3D face camera which we covered back in January. Below you'll find Intel's promotional video about their new Multi-Camera 3D RealSense camera system coming to x86 based tablets this fall. It sounds pretty interesting, especially the point where they illustrate being able to figure out distances of items in a photo.

In the mid-term (over the next two or three years), Intel will be pushing for desktops that will run without wires using magnetic resonance technology. This is something that we covered in yesterday's report titled "Retina Displays for the Mac and Wireless Charging on the Way."

Side Note: The three photos in our report can be enlarged by simply clicking on them.