Earlier today our Patently Mobile site published a report about new trademark filings for Samsung and Google. While Samsung is seeking trademarks for a "Gear Store" and a possible future wearable device called "Gear VR," Google filed trademarks relating to Project Tango. The twist that was found while reporting on this is that Project Tango is now headed for future 7" Android tablets. Project Tango was originally designed for an upcoming smartphone that could debut as early as this week during their Google I/O developer conference.

For those unfamiliar with Project Tango, it's about a new 3D camera coming to future smart devices as further detailed in the video below.

The Project Tango website now displays the Project Tango Tablet Development Kit as noted in our graphic below. The notice states that "Our 7" development kit is powered by the NVIDIA Tegra K1 Processor packed with 4 GB RAM, 128GB of storage, motion tracking camera, integrated depth sensing, WiFi, BTLE, and 4G LTE (availability will depend on region and carrier) 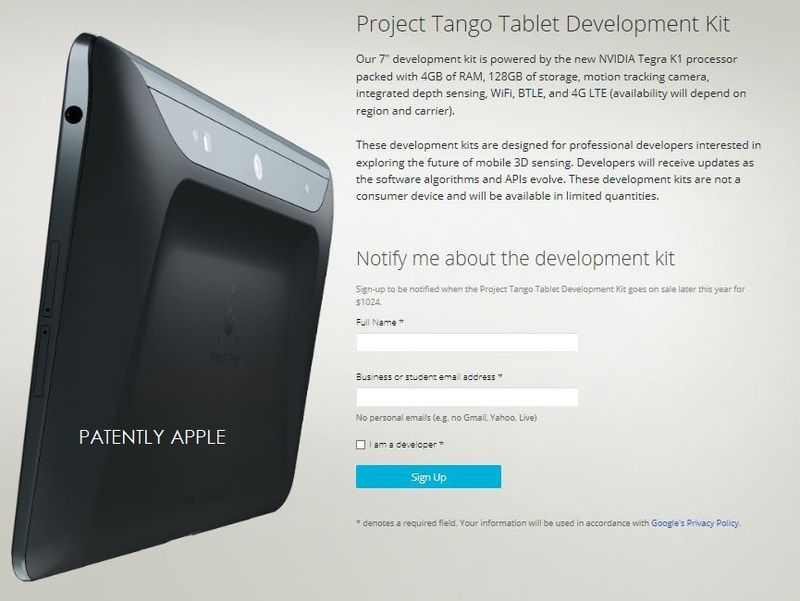 Google further notes that "These development kits are designed for professional developers interested in exploring the future of mobile 3D sensing. Developers will receive updates as the software algorithms and API's evolve. These development kits are not a consumer device and will be available in limited quantities. No time table was given as to when such devices could be ready for market.

While it's unlikely that Project Tango based tablets would ever appeal to iPad fans, being that they're a bulkier styled tablet, they might be able to appeal to some market newbies looking for something different or for those in specialty niches where 3D camera capabilities would be of assistance in their line of work.

Google will definitely need to showcase a number of killer apps to make Project Tango exciting and perhaps we'll see some of that unfold later this week during the Google I/O conference.

For the record, we reported back in April that Apple's PrimeSense technology actually plays a central role in Project Tango. Whether that will inspire Apple to work on a similar 3D camera for future iDevices or simply present a future headache for Project Tango is unkown at this time.