On June 19, 2014, the US Patent & Trademark Office published a patent application from Apple that reveals a futuristically advanced iPhone feature and capability. In the future, Apple's iPhone may be able to project an emulated keyboard, keypad, mouse, trackpad, or a game controller onto a table top surface and more.

Apple's patent application covers a very complex invention that provides techniques, including devices and methods, which can determine a resonant frequency and possibly other characteristics of an object. You can get lost in this patent application as it describes things that you can't really envision unless you're the inventor. Yet at some point, clarity arises which spells out what this invention could actually be used for.

Apple notes at one point in their filing that in one embodiment, the surface (see Patent FIG. 1     patent point #120 below) that the iPhone will rest on can include a relatively flat, relatively solid object, such as a desk or a tabletop. For example, the surface can include one or more regions (such as #122 of FIG. 1) on which a user can poke, scratch, slide, tap, or otherwise cause a vibration or other sonic impulse. This can have the effect that the surface, when the user taps on one such a region of the table, emits a sonic impulse that can be received and interpreted by the frequency device, which is noted as an iPhone. 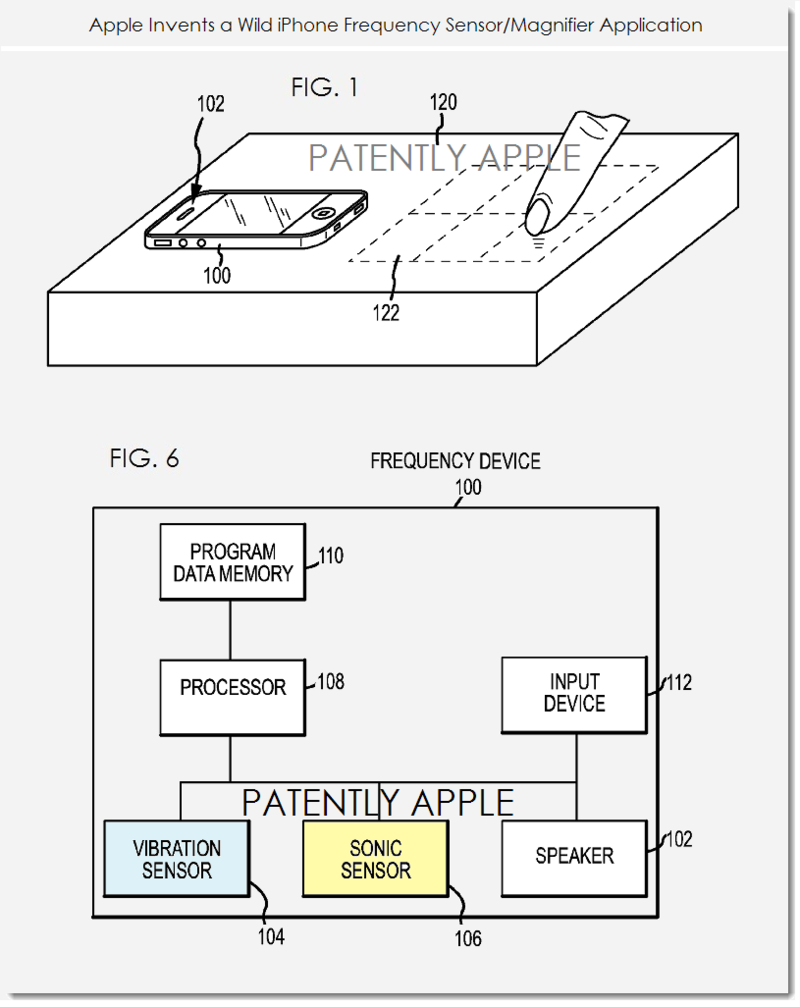 The basics behind such an invention can be seen in a video titled "scratch Input" that we first presented in our 2010 report titled "The Tablet Prophecies – Future Twists."

In one embodiment, Apple notes that the user may place a printed keyboard, such as made of paper or plastic, under the iPhone. The printed keyboard may indicate a location of where to tap or slide to indicate particular keys or controls.

For a first example, a plastic keyboard may include a material with a relatively high resolution of location, by its own impulse response or resonant frequency.

For a second example, the locations of keys or controls may be pre-determined by calibration of the iPhone (frequency device) with respect to the surface, with the effect that the iPhone would have relatively good resolution of where the user swipes or taps, and without substantial overlap of acoustic signals.

For a third example, the printed keyboard may include a set of ridges or other surface features, such that swiping a finger (or other implement, such as a stylus) on or near those surface features would be detectable by the iPhone.

In yet another embodiment, Apple notes that in cases in which the regions (#122) of the surface can be divided into a multiplicity of letters or symbols such as a virtual keyboard, the virtual keyboard can be combined with a display and dynamically adjusted to alter the letters or symbols associated with each key in response to one or more time-varying circumstances.

Apple later notes in their patent application that a second method includes using a set of flow points and method steps. In one embodiment, the method can enable the iPhone to sense acoustic vibrations from an object, such as received from a finger or stylus applied to the object, or from a device applied to the object.

In another embodiment, the iPhone can adjust its operation in response to the vibrations, such as constructing input data. For example, the iPhone will be able to receive vibrations from one or more locations on a tabletop, and can, in response to a measure of how much the tabletop amplifies or dampens vibrations from those locations, emulate a keyboard, keypad, mouse or trackpad, game controller, musical instrument control, or other input for a computing device.

In one embodiment, the pattern could authenticate a specific user or otherwise indicate that the iPhone should respond to particular commands.

Although there are some devices on the market that could generate a virtual keyboard, Apple's patent application clearly shows us that their invention provides features that go far beyond such devices.

Apple credits rather unknown engineers Paul Orri Lazarescu, Daniel Goodman and Adithya Raghavan as the inventors of patent application 20140168170 which was originally filed in Q4 2012. Considering that this is a patent application, the timing of such a product to market is unknown at this time.