Compared to its chief rival mobile operating system, namely iOS, Android updates are typically slow to reach actual devices. For devices not under Google's own Nexus brand, updates often arrive months from the time the given version is officially released. This is partly due to the extensive variation in hardware of Android devices, to which each upgrade must be specifically tailored, as the official Google source code only runs on their flagship Nexus devices. Today's report quickly looks at Android's update problems while showing you the latest Android web traffic stats from Chitika that illustrates just how divided their OS ecosystem really is. This topic just happens to have been a key point that was highlighted during this week's WWDC keynote by Apple's CEO Tim Cook who took great pleasure in poking a stick in Android's eye.

Porting Android to specific hardware is a time and resource-consuming process for device manufacturers, who prioritize their newest devices and often leave older ones behind. Hence, older Android based smartphones are frequently not updated if the manufacturer decides it is not worth their time, regardless of whether the phone is capable of running the update.

This problem is compounded when manufacturers customize Android with their own interface and apps, which must be reapplied to each new release. Additional delays can be introduced by wireless carriers who, after receiving updates from manufacturers, further customize and brand Android to their needs and conduct extensive testing on their networks before sending the upgrade out to users.

The lack of after-sale support from manufacturers and carriers has been widely criticized by consumer groups and the technology media. Some commentators have noted that the industry has a financial incentive not to upgrade their devices, as the lack of updates for existing devices fuels the purchase of newer ones. The Guardian has complained that the method of distribution for updates is complicated only because manufacturers and carriers have designed it that way.

Dan Gillmor of the Guardian specifically noted this in a report published in late 2012: I've now been orphaned twice by the Android crowd. The first time was an expensive Samsung tablet, sold by T-Mobile, that wasn't updated even though the same tablet did get updates for the Wi-Fi version and versions sold by other carriers. That experience made me view Samsung devices and T-Mobile's network as a last resort in my shopping.

The second time was just a couple of weeks ago, when Motorola – owned by Google, creator of the Android operating system – reneged on a public commitment to update my current phone model to the latest OS. The company has offered the customers it stiffed a $100 discount on a new phone. No thanks. Why would I trust Motorola in the future after this experience? I won't take the chance."

In 2011, Google partnered with a number of industry players to announce an "Android Update Alliance", pledging to deliver timely updates for every device for 18 months after its release; however, there has not been another official word about that alliance which has been questioned by many including Ars Technica and Computerworld.

The Deeply Divided Nation of Android

The latest usage data from Chitika point to KitKat users generating more than one third of all Android smartphone Web traffic within the U.S. and Canada. This is a jump of more than 25 percentage points since our previous study conducted in early April 2014, and makes KitKat the second-most heavily used major Android OS version on North American smartphones next to Jelly Bean. 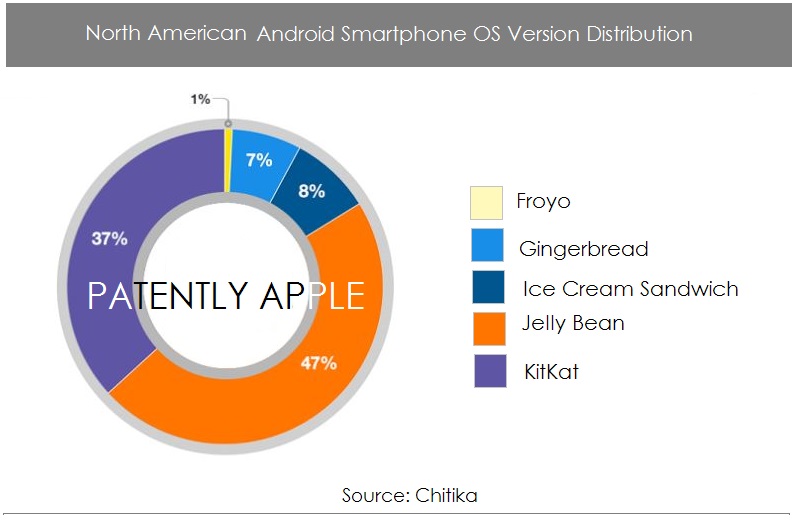 The growth in KitKat usage rates on North American smartphones is likely the product of a number of developments over the past several months. Google has released Android 4.4.x updates to a wide variety of devices, including the three most recent Samsung Galaxy S smartphones. Samsung users as a whole represent the largest percentage Android smartphone Web traffic in North America, with Galaxy S models being the majority of that total.

Yet no matter how you try to dress this pig, the Android landscape remains deeply divided. You can clearly see in the chart above that 47% of Jelly Bean are users unable to upgrade to KitKat and more importantly, are unable to get security updates and patches.

Beyond web traffic being deeply divided between two versions of Android, developer.android.com presents us with a chart below that shows us that KitKat in general only holds 13.6% distribution in the bigger picture with over 85% of the other Android versions being divided between Gingerbread, Ice Cream Sandwich and Jelly Bean.

Apple's CEO Poked Android in the eye this Week

During one of Apple's WWDC keynote segments this past week, CEO Tim Cook took a little time to poke Android in the eye. Cook noted that "Half of Apple's customers in China in the last 12 months were Android switchers," and stated that they simply made the wrong choice the first time (as the audience laughed). Cook noted that "Customer satisfaction for iOS 7 is 97%, according to a ChangeWave survey. These are customer stat ratings that no one gets. It's really enormous. 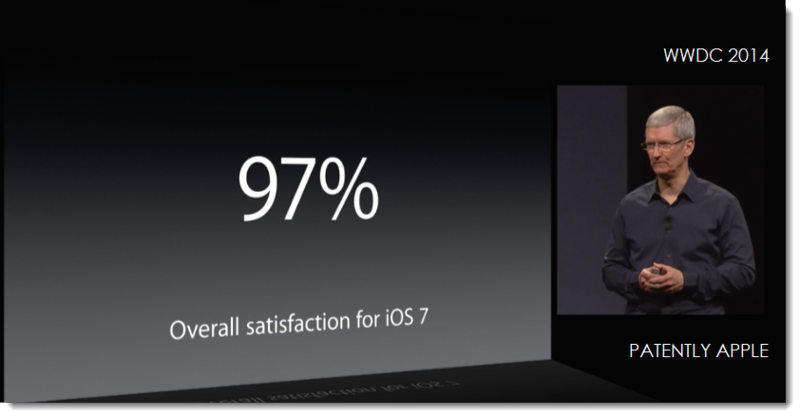 Now one of the reasons why customers say they love iOS, is that we make available our software updates to as many customers as possible. If you look at what happened with iOS 7, our latest release, almost 9 out of 10 people in our installed base are running our latest operating system. 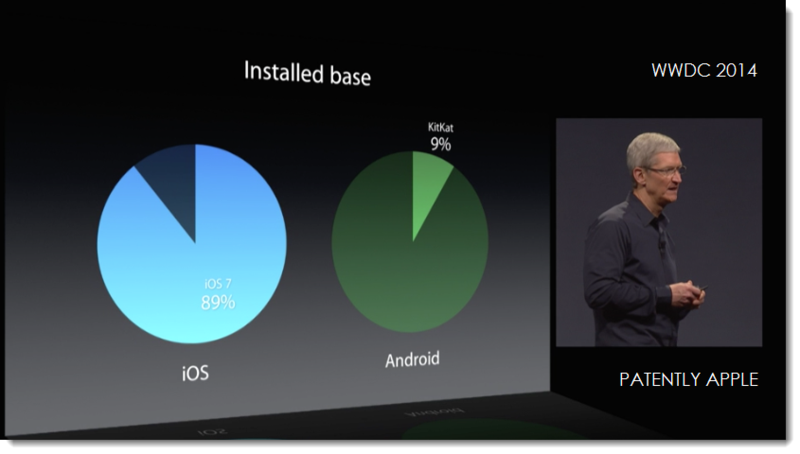 This is in stark contrast to Android. If you look at their latest release, one out of ten of their customers are on their latest software. And if you looked at a broader group over a third of their customers are running a version of Android from four years ago." In an amusing way Cook added "That's like ancient history," which was met with great laughter from the audience.

Then Cook brought out the lance: "Now that means that these customers aren't getting great new features. They're not able to run your latest apps and they don't get security updates that they may need to stay safe. And this is particularly important with Android which dominates the malware market. 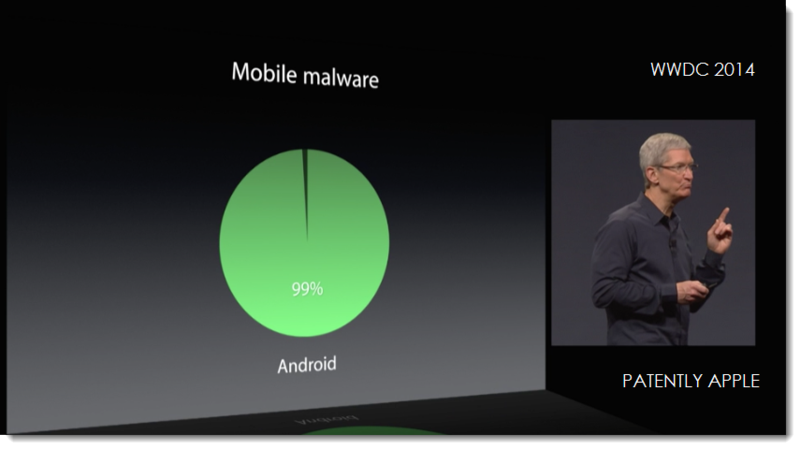 No wonder experts are saying things like this: 'Android fragmentation is turning devices into a toxic hellstew of vulnerabilities.' 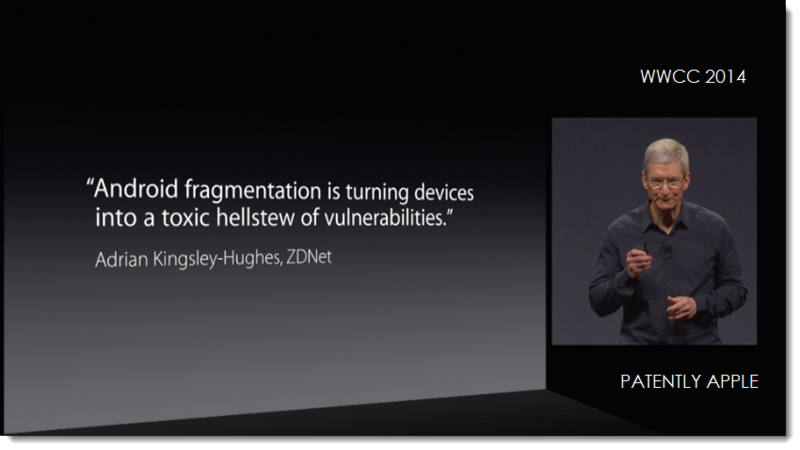 Now, fortunately, iOS hasn't had these kinds of issues. We do everything we can to make our updates available to as many people as possible. So we could not be happier with iOS 7 and the momentum of iOS devices."

When you consider Android's "hellstew of vulnerabilities" and Senator Al Franken questioning Samsung's new fingerprint security feature vulnerabilities found in conjunction with PayPal, it clearly paints a picture of Android that's very negative. Many of those grappling with Malware on Android are moving to Apple's iOS and in China, as Cook pointed out, the numbers are huge. And anyone considering using Android's e-wallet services, especially with the new Galaxy S5, should beware as hackers can have as many cracks at your account as they need.

At the end of the day, Android's ongoing problems with malware and OS updating are constantly popping up in the press and an embarrassment for a major operating system. In contrast, Apple's iOS 7 and their upcoming iOS 8 shone brightly this week during their WWDC event – with new features galore on the way that definitely have Apple's fan base really excited. Apple's new iOS 8 will be coming our way when their new iPhone 6 and next generation iPads debut this fall.

Another look at Android's Hell Stew