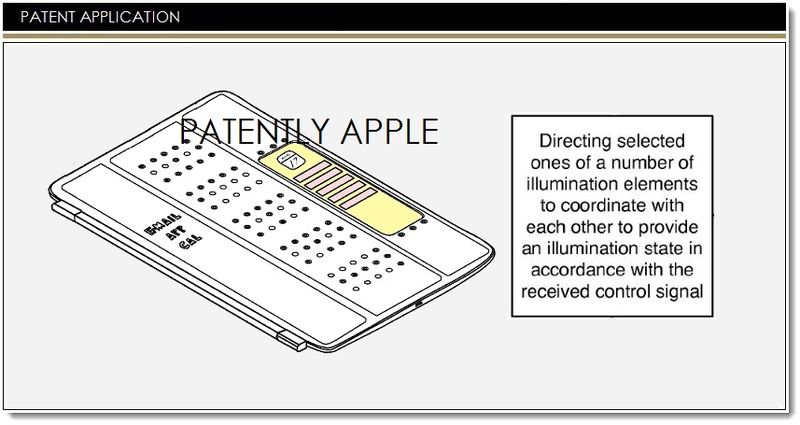 On June 12, 2014, the US Patent & Trademark Office published a patent application from Apple that reveals their ongoing work to advance iPad Smart Cover features. In this current invention, Apple describes their Smart Cover being able to present live illuminated alerts and messages to users on the face and/or inside flaps of the Smart Cover using varying colored LED lights.

Recent advances in portable computing include the introduction of hand held electronic devices and computing platforms known generically as tablet devices. These devices can be used for any number of tasks including word processing, social media networking, video conferencing, and gaming. These tablet devices also generally include a large screen that can be susceptible to damage. Consequently many users choose to cover the display of tablet devices with some form of screen protector. Because the screen protector tends to mask information displayed on the screen it becomes difficult to present visual alerts or updates to a user on the status of any number of tasks or events without removing the screen protector. A user must generally wait until the protective cover is remove to receive any updates on events that have transpired since the device was last used.

Therefore, what is desired is a way to alert a user of an event or change in status associated with the tablet device while the screen protector is covering the tablet screen.

Apple's patent application generally relates to a possible future version of an iPad Smart Cover that will get smarter by displaying visual status information or indicators on its face.

The invention covers a method which provides a visual notification to an iPad user while the display of the iPad is covered by a Smart Cover. The method includes at least the following steps: (1) receiving a control signal at the smart cover from a processor disposed within the iPad through a communication channel between the tablet device and the accessory device, the smart cover having a flexible flap with a size and shape in accordance with the display of the iPad; and (2) providing the visual notification corresponding to an operating state of the tablet device by directing selected ones of a number of illumination elements disposed across the flexible flap to coordinate with each other to provide an illumination state in accordance with the received control signal.

In Apple's patent FIG. 2A illustrated below we're able to see a top perspective view of a Smart Cover having a number of electroluminescent (EL) panels arranged across it. In some embodiments the EL panels can be built from for example active matrix electroluminescence (AMEL) technology allowing for low power usage, and relatively lightweight.

Alternatively, thin film electroluminescent (TFEL) display panels can also be used. Apple's iPad can be configured to supply both power and control signals to this future Smart Cover. In one embodiment the iPad's Smart Cover will be able to display any of a number of different colors.

In some embodiments illumination of a particular number or configuration of EL panels can be used to alert a user of the iPad's status of a certain event or application. For example, EL panels 202-214 can be configured to each light up red when the iPad's processor detects an event with a high enough priority. 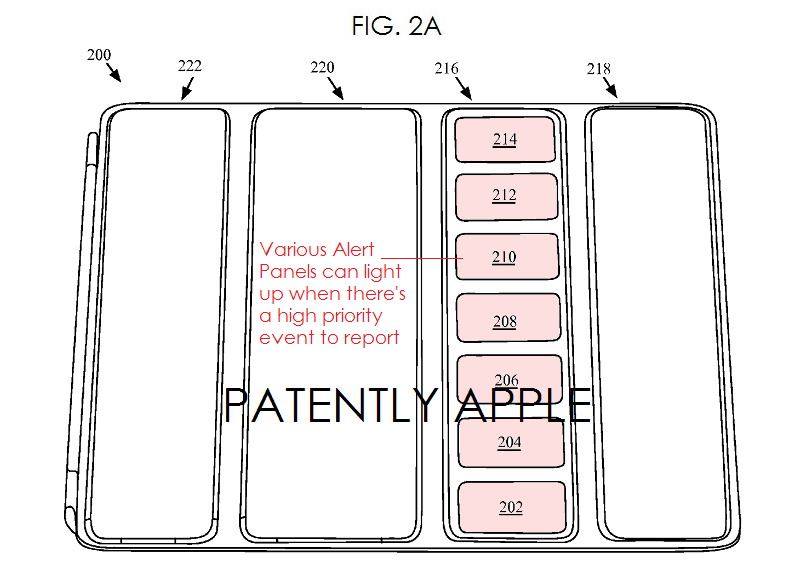 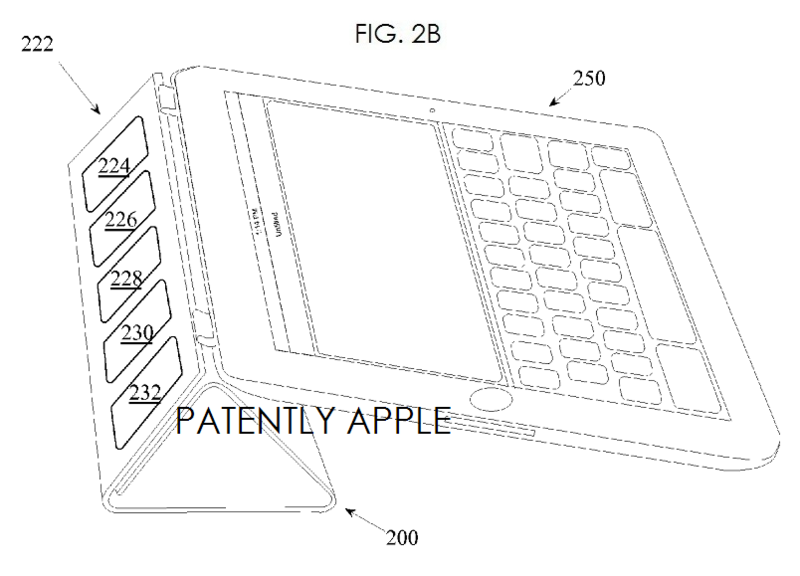 In Apple's patent FIG. 3A below we're able to see a top perspective view of the iPad's Smart Cover having a number of light emitting diodes (LED) arranged across it. The Smart Cover can have a number of segments 302-308. Each LED can be either a single color LED or can be configured as an RGB LED, the RGB LEDs allowing almost any color to be displayed by each of the LEDs. By illuminating select LEDs messages can be displayed across an outer surface of the Smart Cover telling a user the exact nature of the alert or status update.

In addition to displaying messages, the LEDs can be illuminated in a manner that forms human readable symbols, such as for example an envelope image signifying receipt of an email, or even a thundercloud signifying approach of an imminent storm. 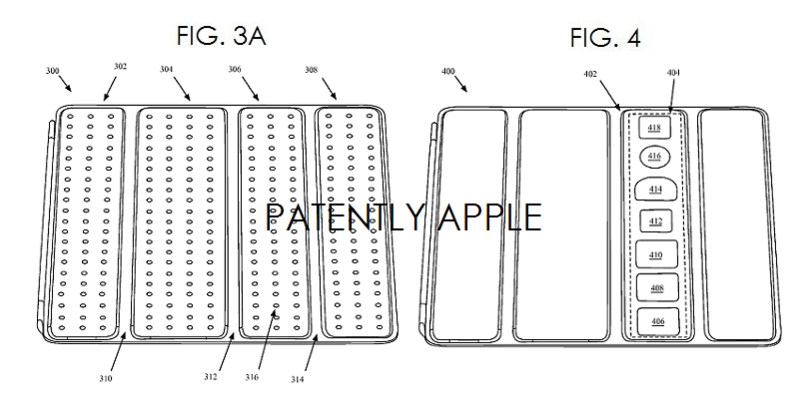 Apple notes that their patent FIG. 4 shows us a top perspective view of the Smart Cover having a segment (where you see the shapes running vertical) with at least one region of transparency which can be at least partially transparent, allowing the iPad's underlying display to shine messages or alerts through the iPad's Smart Cover. 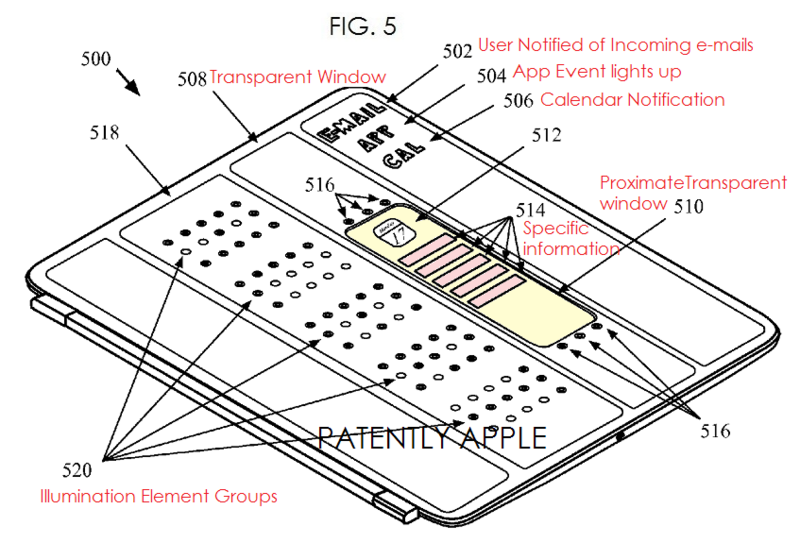 Apple further notes that the use of illumination elements #516 as shown in the patent figure above can be useful for drawing a user's attention to the transparent window #510 when information is being displayed through it. In this way a user is more likely to be alerted to the displayed notification. The color of illuminated illumination elements can also be indicative of an urgency of the displayed message. In this way a user can ignore notifications of lower priority when that user is busy working on a higher priority task.

Apple credits Jared Sartee and Justin Wodrich as the inventors of patent application 20140159867 which was originally filed in Q4 2012. Apple has filed for at least four other Smart Cover patent applications since 2012 as noted below: