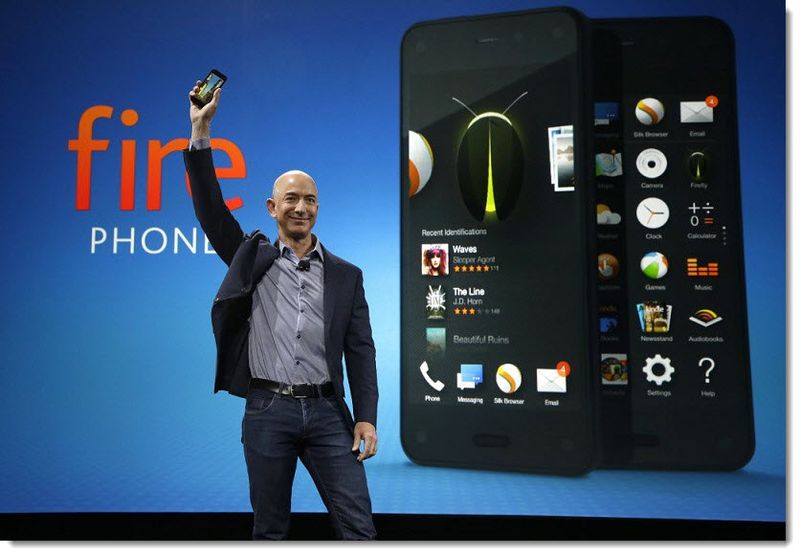 On June 4 we reported that Amazon announced that they would unveil their first smartphone during a June 18 event. To differentiate their phone in a sea of new smartphones coming to market later this year, Amazon was aiming to wow consumers with the world's first 3D user interface that would use head tracking technology. A video teaser was included that was to build excitement for the new phone. Well, today is June 18 and Amazon's CEO Jeff Bezos did in fact deliver their new phone branded the Fire Phone. Update 12:50 PM PST: see an Amazon Video Link to the 3D effect or dynamic perspective UI.

Amazon announced its first smartphone today, a bold move into a sector currently dominated by Apple and Samsung. At an event in Seattle, CEO Jeff Bezos unveiled the Fire Phone, a smartphone with a 4.7-inch IPS LCD HD 3D display, a 2.2 GHz quad-core processor, a 13 megapixel rear-facing camera and 2 GB of RAM. The device, which has a heavy focus on multimedia, will offer unlimited photo storage and a dedicated button to launch the camera app.

The phone uses Gorilla Glass 3 that's more scratch resistant and provides a unique rubber frame as opposed to metal. Bezos tried to show that they could show off a phone in Jony Ive style by pushing things like "polished button chamfers" and "CNC machined aluminum" without having Ive's British spin on aluminum of course (ha!). Additionally, the phone offers Dolby sound with "virtual surround sound" and tangle-free flat earphone cables with a remote and mic.

The Fire Phone can provide users with a 3D-like effect created by an added layer of depth on the screen. During the press event, Bezos reportedly demonstrated some uses for 3D by toying with a highly detailed maps app and scrolling through a line of dresses in a 3D space. The phone's motion sensors allow users to scroll within certain apps by tilting the device rather than touching the screen.

You'll supposedly be able to move and tilt the phone to shift the contents of the display (images, maps, and so on) subtly, creating a glasses-free 3D effect that doesn't rely on the user keeping their head or eyes in a particular position. The phone will also let you flip through images and scroll through Web pages by subtly tilting the device, rather than relying solely on finger input.

We'll be watching for a video illustrating this 3D feature to judge if the 3D effect is "cool" or purely a gimmick. Update: here's Amazon's own video of this feature and it's very interesting. My first impression is that it's cooler than Apple's Parallax, by far. The video also shows off the effect on maps and introduces us to another feature for "auto scrolling."

Below is a second video, this time from CNET, that shows off dynamic perspective clearly and it's It's impressive.

The new Fire Phone is designed to be tightly integrated with Amazon's myriad services. Video platforms such as Netflix, HBO, ESPN and Amazon's own Prime Video service will be available for the phone, as will Amazon's just-released on-demand music streaming service.

The phone will also come with a new program called Firefly, which allows people to scan objects, songs and TV shows (sort of like an all-purpose Shazam app) so that Amazon can identify them and offer a way to purchase them from its store. In total Firefly will recognize 100 million items, Bezos said.

Amazon has extended their Mayday live tech support to their Fire Phone which is a nice touch. I'm sure many would love for Apple to offer such a service. You simply hit the Mayday button in quick actions and an Amazon expert will appear to help you via live video. Our tech experts can co-pilot you through any feature by drawing on your screen, walking you through how to do something yourself, or doing it for you—whatever works best. Throughout the process, you’ll be able to see the Amazon expert live on your screen, but they won't see you.

In the end, their new Fire Phone demonstrates Amazon's growing interest in creating hardware. In addition to its popular line of Kindle e-readers and tablets, the company released its first set-top-box, the Amazon Fire TV, earlier this year. At a quick first glance, Amazon's Fire Phone looks like a well thought out device with a blend of slick hardware and new software twists that are uniquely their own.

Though as always, we'll have to wait for the pro reviewers to test drive the new phone to see if the Fire Phone will be able to challenge other Android phones if not attract a few ex-Nokia fans along the way. As for winning over Apple fans, time will tell, but I highly doubt that it will be able to even make the slightest dent in any way shape or form.