Microsoft's Surface: Tablets that make no Sense or Dollars

Prior to yesterday's unveiling of the new Surface 3 from Microsoft, a new study showed just how bad the Surface table was doing in terms of web traffic in North America. Over time it's been losing ground and in terms of profit, there isn't any to speak of. In fact Surface remains a money loser. That's why Microsoft tried to shift its marketing focus yesterday. They need to change the mindset in the public about Surface so that you can think of it as a notebook replacement. Yet this Frankenstein of notebooks has no soul and doesn't know what it is. It's doomed to stay stuck in its current losing rut.

In April, Computerworld posted a report titled "Losses mount for Microsoft's Surface tablet line." In the report they noted that Microsoft posted a $45 million loss for Surface in Q1, 15% more than the quarter before. Translation: It's a loser … as a tablet. This is why Microsoft's Panos Panay, Microsoft's Corporate VP for Surface, scrambled to reinvent Surface as a notebook challenger.

As an iPad challenger it's been a disaster. So why not pretend it's now a MacBook Air challenger. Hell, it's lighter than a MacBook Air. That was actually a huge selling point of during Panay's keynote. It's classic juvenile marketing 101.

According to Chitika's latest report, "Usage share metrics underscore Microsoft's existing issues in North America, as the share of Web traffic from the company's two tablet models, the Surface and Surface 2 has slightly declined since February 2014. As Apple iPad users generate more than 75% of all North American tablet usage, for additional clarity, Chitika Insights focused on non-iPad tablet traffic for the purposes of this analysis."

They further noted that 'Surface tablet users generated a marginally decreasing share of U.S. and Canadian non-iPad tablet Web traffic as we moved through late Q1 and early Q2."

Chitika tried to spin it the best that they could by saying that perhaps Surface users are working with Microsoft's Office offline more than browsing. Perhaps, but Surface still continued to lose money even with Office. So that angle isn't proving to be a magic bullet for them either. 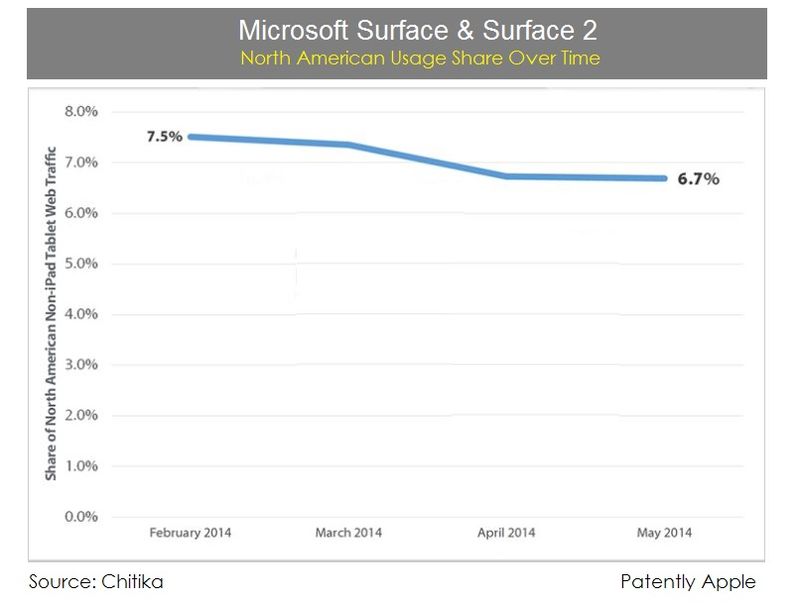 Microsoft has to abandon their Surface Tablet that's now pretending to be a notebook. They have to reinvent Surface as a true notebook with a classic solid keyboard and market the fact that it also happens to double as a tablet via a detachable display. They're doing the reverse and it's not a credible design to pull that off.

Microsoft is hard headed and stuck in a mental rut. Microsoft's new CEO came in too late to stop this latest Surface offering from coming to market. Yet if he continues to support it, Surface 3 is going to drag down his credibility as a man of change. This is Ballmer's losing project and he should reshape it quickly or pay the price of being a man without vision as he predecessor.