Apple Sued for using a Maps Application on their iDevices

American Navigation Systems, Inc. (AmNav) has filed a patent infringement lawsuit against Apple. The patent infringement lawsuit concerns Apple's use of GPS in mobile devices, iDevices more specifically. According to AmNav's complaint before the court, the inventors of their acquired patent "conceived a way to display GPS data in real time on a portable mapping device." AmNav who is seeking a royalty from Apple, continually references Google Maps far more than they do Apple Maps. Their angle is to go after the device makers as this is where their patent applies. So instead of going after Google directly, they're going after Apple for Maps on iOS and Samsung for Maps on Android.

According to AmNav's court document before the court they first talk about GPS as follows: "GPS technology lets users determine precise locations of objects on and near the Earth's surface. It works by using electronic signals to measure the distances between multiple GPS satellites (usually at least four) and particular sites. Small differences between the times at which the satellites beam a GPS signal and the moments when a receiver detects the signals allow the system to pinpoint the whereabouts of the receiver.

Google Maps and Apple Maps use global positioning to provide a visual report of the user's location on a map to within three to five feet of the user's actual location."

The Inventors and the Invention

In 1995, Doug Backman teamed up with Frank DeFalco, Gene Roe, and William Michalson on a GPS project. Backman, an entrepreneur who earned degrees from Cornell University and Boston University, saw that portable GPS devices would become widely popular. He also grasped the huge commercial appeal of a device that would allow people to see and follow their changing location on a map in real time.

DeFalco, Roe, and Michalson all had engineering degrees from the nearby Worcester Polytechnic Institute. The four men together conceived a way to display GPS data in real time on a portable mapping device. They had many meetings together and developed a working prototype. In January 1996, they tested their prototype while driving around Worcester, Massachusetts. It worked splendidly. 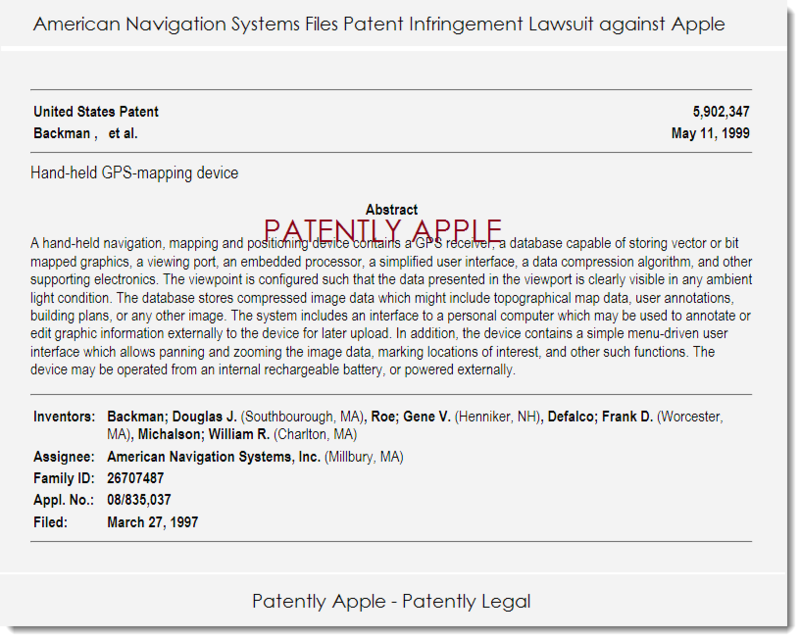 Apple has included a maps application – either Google Maps or Apple. Each of the inventors executed assignments of all rights relating to the patent to AmNav.

According to AmNav's formal complaint they state that "Apple has included a maps application – either Google Maps or Apple Maps – on all its smartphones since it launched the iPhone in 2007. It has likewise loaded all its tablet devices with a maps application since it introduced the iPad in April 2010. Apple has sold many millions of iPhones, iPads, iPad Minis, and other devices that used Google Maps or Apple Maps, earning billions of dollars in profit as a result of the immense popularity of maps applications."

The complaint further states that "The ability of Apple's smartphones, tablets, and other devices to practice the inventions of the '347 Patent accounts for much of the value of those devices. A survey in August 2013, for instance, crowned Google Maps as the most popular smartphone application of all; the survey found that 54 percent of all global smartphone users used Google Maps at least once during a one-month period."

AmNav is seeking a royalty from Apple.

The patent infringement case presented in today's report was filed in the Florida Middle District Court, Tampa Office. The Presiding Judge in this case is noted as being Judge James S. Moody with the Referring Judge noted as Thomas B. McCoun.

AmNav doesn't appear in any Google search as a real business of any kind. Their name is only associated with lawsuits which likely means that AmNav is a patent troll or as they prefer to be called, a Non Practicing Entity (NPE). Yesterday Patently Apple posted a report titled "New Legal Study Confirms that Apple Remains the Number One Target of Patent Trolls."