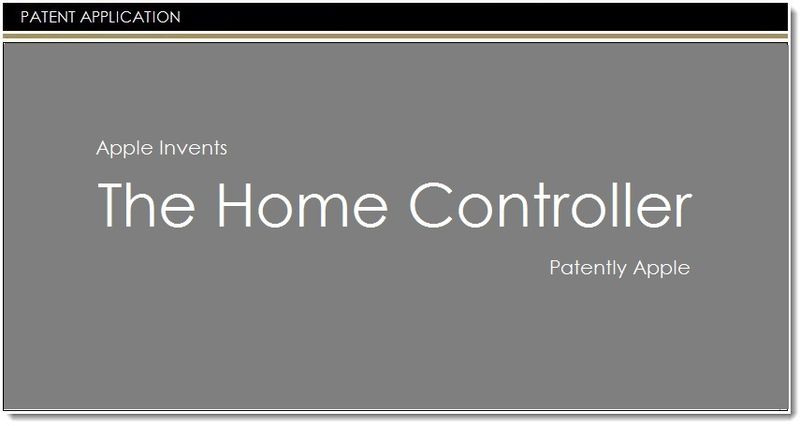 On Monday we posted a report titled "Apple may Surprise the Market with a New Smart Home Platform." The report was about a news leak to the Financial Times. They stated at the time that "Apple is preparing to announce a new software platform that would turn the iPhone into a remote control for lights, security systems and other household appliances, as part of a move into the "internet of things." Today, the US Patent & Trademark Office published a patent application from Apple that reveals their ongoing work regarding networking residential consumer electronics devices. In particular, the invention provides integrated establishment and control of communication sessions between these consumer electronics devices. One scenario is to conduct a phone call or possible FaceTime call on your television. The timing of this patent couldn't have been better.

Traditionally, consumer electronics devices have used proprietary control and communication interfaces, which significantly impair the ability of these devices to interact with one another. With such proprietary interfaces, the devices that may interact with one another must be from a common manufacturer or provide a highly related function. For example, certain stereo or home theater electronics components may be connected to facilitate common control and operation. However, such control rarely extends to cable boxes, televisions, computers, or telephony devices.

Given the rapid acceptance of the Internet and packet-based communications and the corresponding convergence of various types of media, including audio, video, voice, and data, there is an ever-increasing desire to provide multimedia capabilities through various devices in an integrated fashion. Unfortunately, the lack of effective integration techniques and the use of proprietary control and communication interfaces continue to provide a barrier to fully exploiting multimedia capabilities.

To further complicate matters, many consumer electronics devices employ wireless interfaces that use a frequency spectrum used by other devices. For example, many cordless telephones operate in the unlicensed 2.4 GHz spectrum. Other wireless devices, such as wireless networking devices using wireless local area network protocols set forth in the IEEE's 802.11 standards, also operate in the 2.4 GHz spectrum. As such, these devices often compete for the allocated spectrum and interfere with one another. Further, the use of different protocols prohibits these devices from being able to interact with one another.

Although networking and telephony applications are the predominant wireless technologies in the home, there is a movement to deliver audio and video to various speakers, controllers, receivers, and monitors or televisions. In addition to wirelessly delivering the media, the need to provide various types of media for multimedia sessions from the various devices in a coordinated fashion will require concerted control over the respective devices. As such, there is a need for a way to provide an efficient and effective integration and control of the various consumer electronics devices in an efficient and effective manner.

The home controller may be integrated into one device or distributed over multiple devices. Further, a Public Switched Telephone Network (PSTN) interface may be provided, wherein the interface provides a gateway that will facilitate the necessary interworking between a traditional telephony line or other circuit-switched connection and the packet-based interworkings of the home controller.

In one embodiment, one of the packet communication clients forms a handset for a cordless telephone, wherein the home controller acts like a base of a cordless telephone. As such, telephony calls over the PSTN and coming in through the PSTN interface are relayed to the packet communication client acting as a handset to facilitate telephony operation.

Apple's patent FIG. 1 noted below we're able to see is a block representation of an integrated home service network environment. 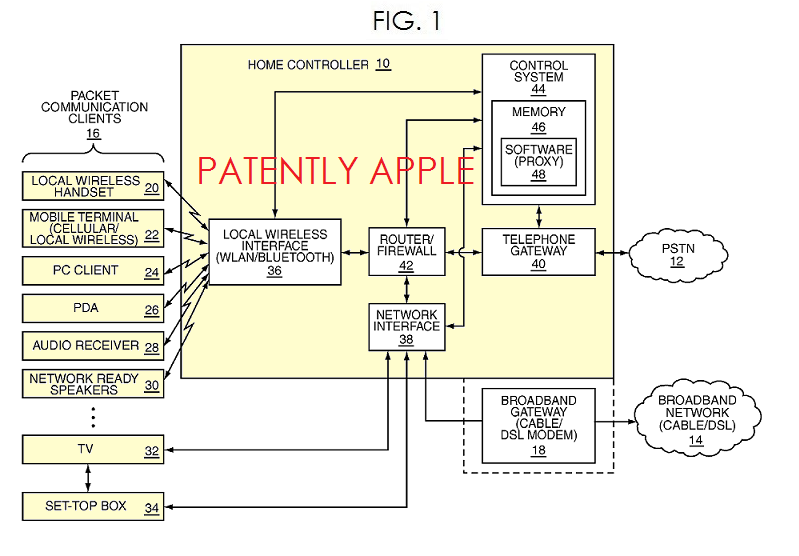 Apple's patent FIGS. 2A and 2B noted below we're able to see an exemplary scenario is provided to illustrate the concepts of the present invention. As illustrated, the PC client 24 is used to establish a television session so that the user may watch channel 3 on the television 32 and receive the corresponding audio via the audio receiver 28, which is connected to traditional stereo or home theater speakers. Once the television sessions are established, the user may receive an incoming call through the PSTN 12, which will automatically trigger the home controller 10 to alert the PC client 24. For this example, the incoming call is answered by the user through the PC client 24, which is presumably equipped with the appropriate microphone, speakers, and the necessary hardware and software to facilitate telephony communications. The PC client 24 may be a notebook computer often used while viewing the television 32. Once the call is established, the user will elect to initiate a video conference, which will be established under the control of the home controller 10 in response to a request from the PC client 24. After the video conference ends, viewing of the television session will resume. FIGS. 2A and 2B illustrate a communication flow using pseudo messaging for illustration purposes. 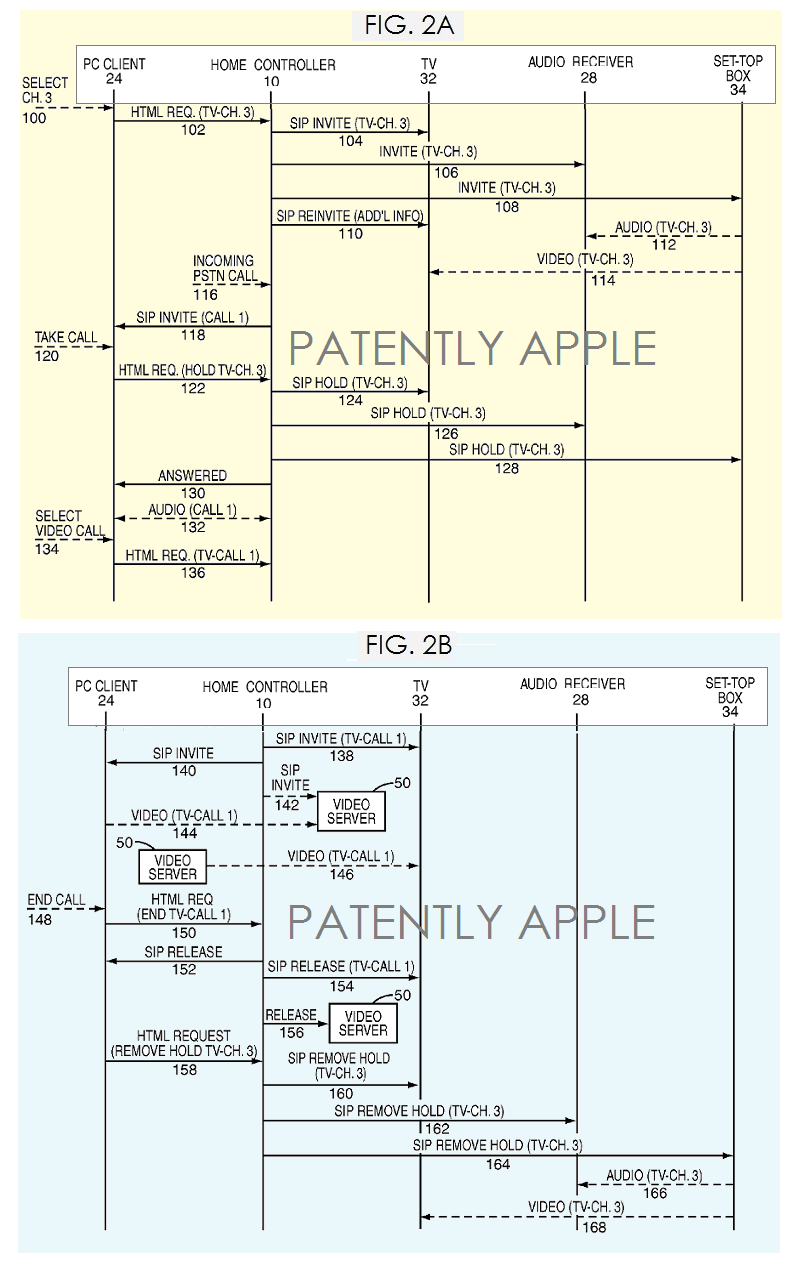 Although Apple was granted a patent for this invention (8,593,995) in November 2013, the patent claims in this patent have changed. In their original granted patent they presented 19 claims. In this latest patent application, there's only one patent claim as follows:

Apple credits Samuel Christie as the sole inventor of patent application 20140146714 which was originally filed in Q4 2013. Considering that this is a patent application, the timing of such a product to market is unknown at this time.