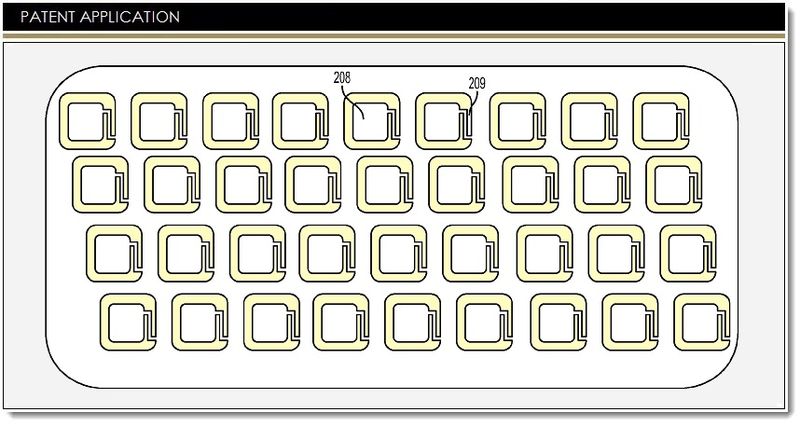 On May 1, 2014, the US Patent & Trademark Office published a patent application from Apple that reveals their vision for possible future Mac Keyboards that support gesture controls and multi-colored in-key displays to support the presentation of symbols such as a Safari or app icons for Pages, Keynote and others in addition to supporting different languages and other kinds of keyboard layouts. Apple's concept of a multi-touch & gesture combination keyboard first surfaced in March in context with a new iPad cover keyboard.

Apple's patent relates to systems and methods for providing multi-functional keyboard assemblies and, more particularly, to systems and methods for providing multi-functional keystacks for keyboard assemblies of electronic devices. This basically translates into keyboard keys having the ability to act like mini displays. In the example below, we a keyboard with side keys having symbols for YouTube, Firefox and so forth. The general keyboard also illustrates random glyphs as Apple's patent supports as well.

According to Apple some embodiments may take the form of a keyboard assembly that may include an array of keys, buttons, and/or switches that may represent different inputs to the electronic device.

For example, each of the keys may include a glyph. As used herein, a glyph can be a legend or symbol (e.g., one or more alphanumeric symbols and/or words) that may be visible on and/or through a keycap of the key. The corresponding input can be initiated within the electronic device when the key is pressed or otherwise actuated.

Although Apple never really spells it out, the keyboard will be able to support customizable layouts to support many languages like Cyrillic, Ancient Greek, Georgian, Arabic, Quenya, hiragana and others. The keyboard will also support any other character set including musical notes, numerals, special symbols, HTML codes, math functions and so on to infinity.

According to some embodiments, each multi-functional keystack can include a keycap, a circuitry module coupled to the keycap, a support mechanism, and a base. The components of the circuitry can include, for example, a light guide panel ("LGP"), at least one light source, a flexible circuit board ("flex"), and/or a switch. The base may support the other components of the keystack, and may be operably coupled to a housing of the keyboard and/or the electronic device.

Apple notes that the keycap, which can be at least partially transparent, may be coupled to the top of the support mechanism, which can support the keycap above the base and can allow the keycap to travel vertically relative to the base (e.g., for activating/deactivating a mechanical switch that may provide a key-stack specific input for the electronic device).

According to some embodiments, the circuitry module that may be included in each keystack may include an electronic visual display ("display").

Additionally or alternatively, the circuitry module of one or more keystacks may include a capacitive sensor for sensing single or multi-touch gestures provided by a user on each key or across multiple keys of the keyboard.

In some embodiments, the keycap can be a rigid and durable material that may be made thinner than typical keyboard keycaps for reducing the overall thickness of the keystack. For example, the keycap may be formed from glass. Thus, the rigid and durable keycap can be thinner and stronger than traditional keycaps while also providing desired transparency characteristics (e.g., for passing light therethrough from an LGP of the keystack) and/or providing desired conductivity (e.g., for enabling capacitive sensing of a sensor of the keystack).

Apple notes that the Light source may be any type of light source (e.g., an LED, a LASER, an incandescent lamp, or a gas discharge lamp). However, due to space constraints, LEDs may be the most appropriate choice. Furthermore, LEDs are inexpensive, easy to mount onto flexible circuit boards, and may be capable of emitting light in a wide range of colors.

In some embodiments, Apple notes that the keys can also provide haptic feedback to the user, such as, for example, by providing an increased resistance, a click, or a vibration when compressed.

In respect to the keyboard key displays, Apple notes that the display may be any suitable display type including, for example, an organic light emitting diode ("OLED") display, an LED display, a liquid crystal display ("LCD"), a plasma display, an electronic ink display ("e-ink"), or any other suitable thin film display. 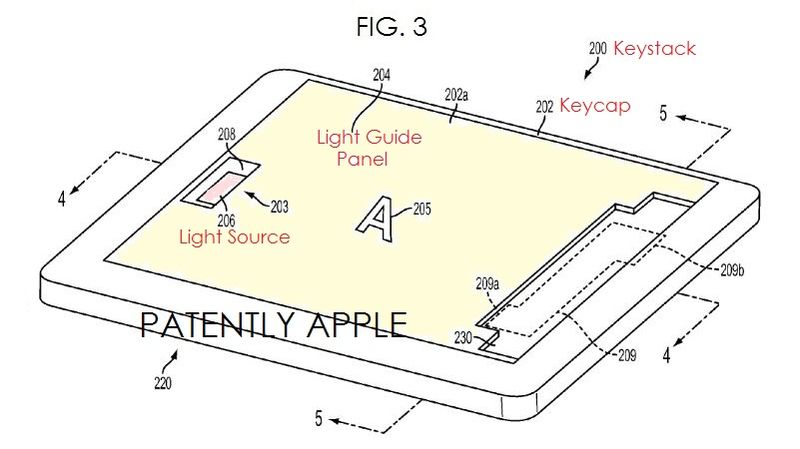 Apple credits Craig Leong, James Niu, John Brock, Keith Hendren, Thomas Wilson, Bartley Andre, Mikael Silvanto and Dinesh Matthew as the inventors of patent application 20140118264 which was originally filed in Q 2012. Considering that this is a patent application, the timing of such a product to market is unknown at this time.

Our cover graphic presents Apple's patent FIG. 8 which is a top plan view of the frame which can span the entirety of a keyboard and facilitate connectivity between individual keys of the keyboard and external circuitry (e.g., one or more processers of an electronic device).

Other Keyboard Ideas from Apple

Like any large inventive company, specific engineering teams are constantly working on advancing various aspects of their product lines. When there's enough working ideas in place they begin cross-pollinating them in an effort to create a single new product worthy of bringing to market. Today's keyboard invention provides for some nice ideas. Yet Apple has a number of nice ideas for future keyboards and they include the following:

Patently Apple presents a detailed summary of patent applications with associated graphics for journalistic news purposes as each such patent application is revealed by the U.S. Patent & Trade Office. Readers are cautioned that the full text of any patent application should be read in its entirety for full and accurate details. Revelations found in patent applications shouldn't be interpreted as rumor or fast-tracked according to rumor timetables. About Making Comments on our Site: Patently Apple reserves the right to post, dismiss or edit any comments. Comments are reviewed daily from 4am to 8pm MST and sporadically over the weekend. Credit: Image of keyboard