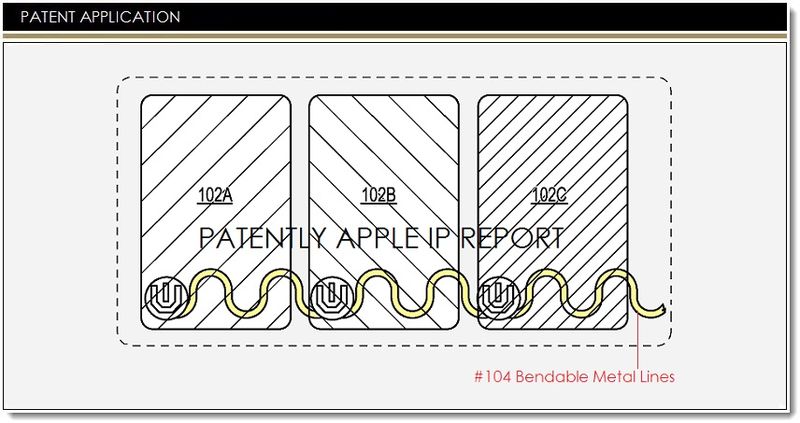 On May 22, 2014, the US Patent & Trademark Office published a patent application from Apple that reveals their ongoing work on future flexible OLED displays. Apple's invention covers the implementation of bendable metal traces that won't break or crack under conditions of the display that require bending or curvature. This supports Apple's patent application regarding hollow structures that include a possible future iPhone. Bendable metal traces represent a key attribute to assist the design of durable flexible displays for future devices.

Apple's invention generally relates to flexible displays for computing devices, and more particularly to implementing a flexible display with metal traces that may bend as the display flexes, without breaking or cracking.

Broadly, a sample flexible display may be constructed from a polymer substrate, an organic light-emitting layer (e.g., an OLED layer) upon the substrate, and an organic passivation layer encapsulating or overlying the light-emitting layer. The substrate may be formed from any suitable material; a polymer is but one example. As a more specific example, the substrate may be formed from polyimide. It should be appreciated that additional layers may be present in a sample flexible display.

Generally, and as shown in Apple's patent FIG. 1 below, a flexible display 100 includes flexible substrate that supports subpixels 102A-C. A metal line #104 may connect the various subpixels 102A-C and also the pixels. Such lines may be, for example, be gate and/or data lines that may carry other information and/or signals.

Conventional metal signal lines or traces are straight, and may be subject to cracking or breaking when the flexible display is bent. That is, the bending motion may strain the metal lines, which may result in cracking or breaking. Accordingly, certain embodiments disclosed herein employ serpentine metal traces, as shown in FIG. 1. 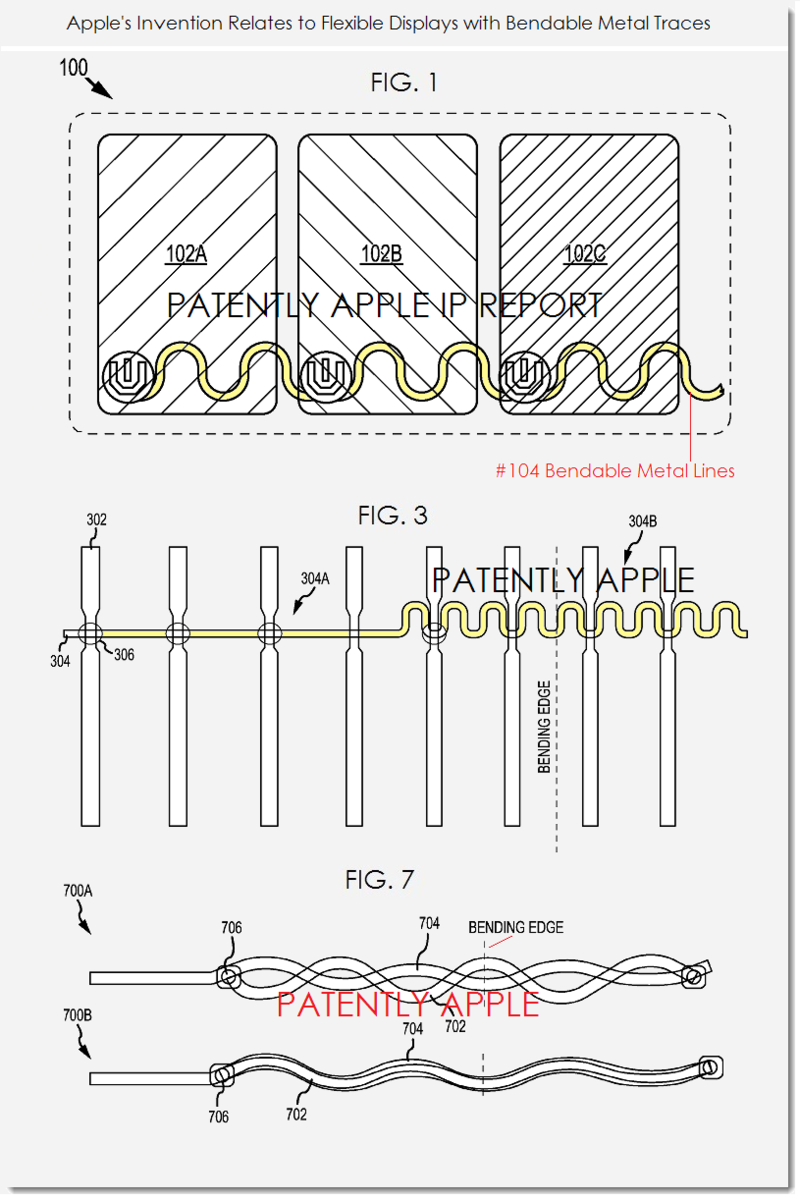 These serpentine traces may have several properties making them suitable for use with flexible displays. For example, when the flexible display is bent, rolled or otherwise deformed, the serpentine metal lines may stretch along their circular portions, rather than break.

In Apple's patent FIG. 3 noted above we generally see a depiction of a gate line overlapping a series of data lines #302. As shown, the gate line #304 may be straight for a first portion (304A) of its length and then serpentine for a second portion (304B) of its length.

In such an arrangement, it is contemplated that the section of the panel having the straight data line would not bend, while the section having the serpentine line would be capable of bending. It should be appreciated that some embodiments may permit bending of the display even if the gate (or other) lines are all straight.

Apple credits Byung Yang, John Zhong, Shih Chang, Vasudha Gupta and Young Park as the inventors of patent application 20140138637 which was originally filed in Q1 2013. Considering that this is a patent application, the timing of such a product to market is unknown at this time.