On May 8, 2014, the US Patent & Trademark Office published a patent application from Apple that reveals a super-resolution camera engine for iDevices and beyond. In camera shootouts against Samsung's Galaxy S5, Apple's iSight camera fares well. Now Apple's super-resolution engine is out to vastly improve stabilizing shots, especially action and panoramic shots for higher clarity.

Typically, a camera is capable of being operated by a user without any stabilization supplementation, such as a tripod or a level surface on which to rest the camera. When a stabilization supplementation is absent, the captured image may be blurry based on movement of the camera during the capturing process. For example, a user holding a camera may involuntarily shake while capturing an image, resulting in a distorted image. This distortion is ubiquitous across all image capturing devices, including portable data and media consumer electronic devices, such as mobile telephones, tablet computers, portable media players and the like that typically include image capturing mechanisms operable as cameras.

To counteract distortion from motion while capturing an image (e.g., jittering by a user operating a camera), a camera may include an optical image stabilization (OIS) system. Such an OIS system is operable to compensate for camera motion during image capture to minimize distortion of the captured image. The OIS system accomplishes this compensation by varying the optical path to the sensor in response to movement of the camera, such as jittering by the user operating the camera. This OIS system may be implemented by translating the lens itself, or may be implemented by moving an entire module that includes both lens and sensor to compensate for the movement of the camera. In any implementation, it is paramount that the OIS system stabilizes the image projected on the sensor before the image captured by the sensor is converted into digital information.

Apple's invention generally relates to an iDevice camera system having a super-resolution based on an optical image stabilization mechanism to vary an optical path to a sensor of the camera. You could find a general overview of what "Superresolution" is all about over at Wikipedia, though it's overly broad. For super techies, there's a link to Apple's patent at the end of the report to help you drill deeper into Apple's way of applying "superresolution." Apple's patent background noted above along with our notes presented below are simply to provide you with a general overview of what Apple's invention is to accomplish.

In Apple's patent figure FIG. 1 noted below we're able to see a simplified block diagram illustrating a camera employing an optical image stabilization system. While the camera system is primarily designed for an iDevice (iPhone, iPad, iPod) it can be implemented in any current Apple product such as a MacBook Pro or potential future product that Apple notes as a television. In the interest of conscientiousness, Apple states that many aspects of the camera system are not shown in FIG. 1 such as autofocus and infrared (IR) filter mechanisms. 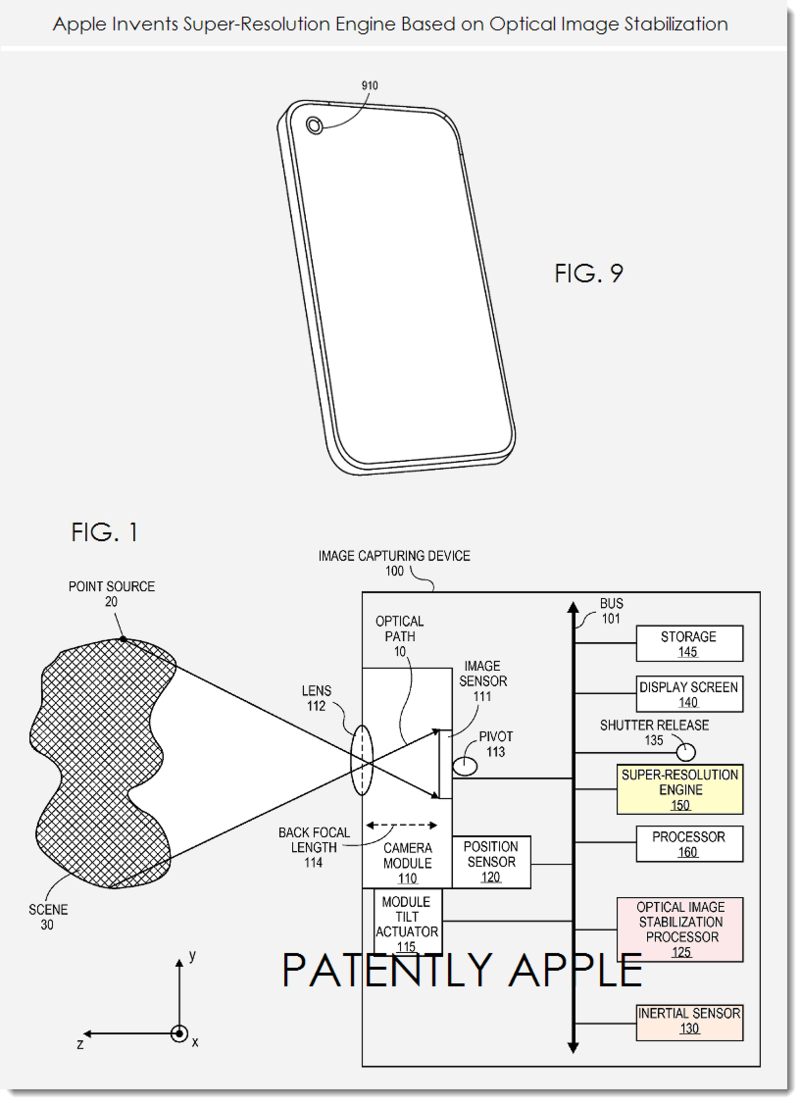 In Apple's patent FIG. 2A noted below we're able to see a block diagram depicting a top view of a camera module# 230 with an optical image stabilization processor #200. The OIS processor is operable to receive input from the position sensors #212 and #214 that indicate the position (e.g., pointing angle) of the camera module influencing the optical path to the image sensor. 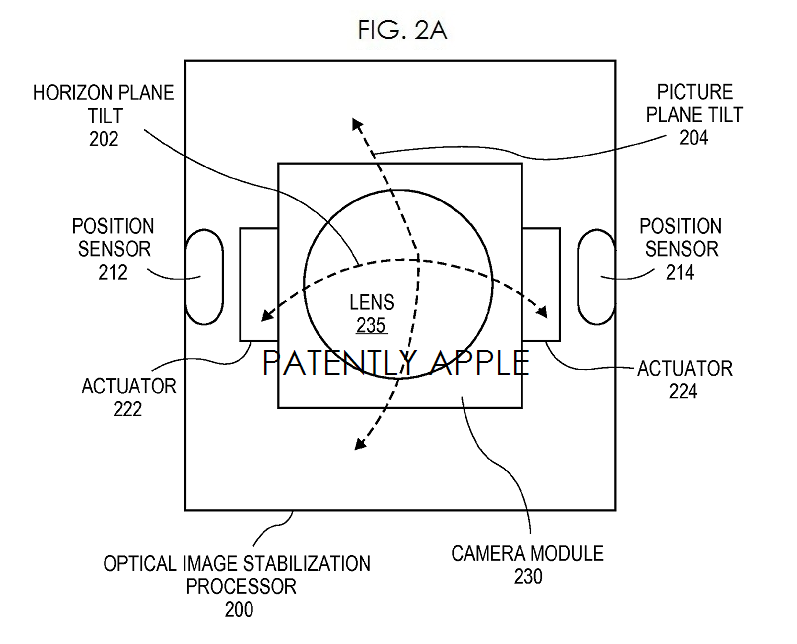 Today on an iPhone 5S we have the option of turning on HDR. In the future you'll have the option of turning on Super-Resolution as noted below in relation to stabilizing your taking while you're taking a panoramic photo. Apple states that "In some embodiments, the image capturing device must be set to create a super-resolution image. This setting may be activated in response to user input, such as by presenting to the user an option to create a super-resolution image. In patent FIG. 8 below we see an illustration of one embodiment with this setting option. 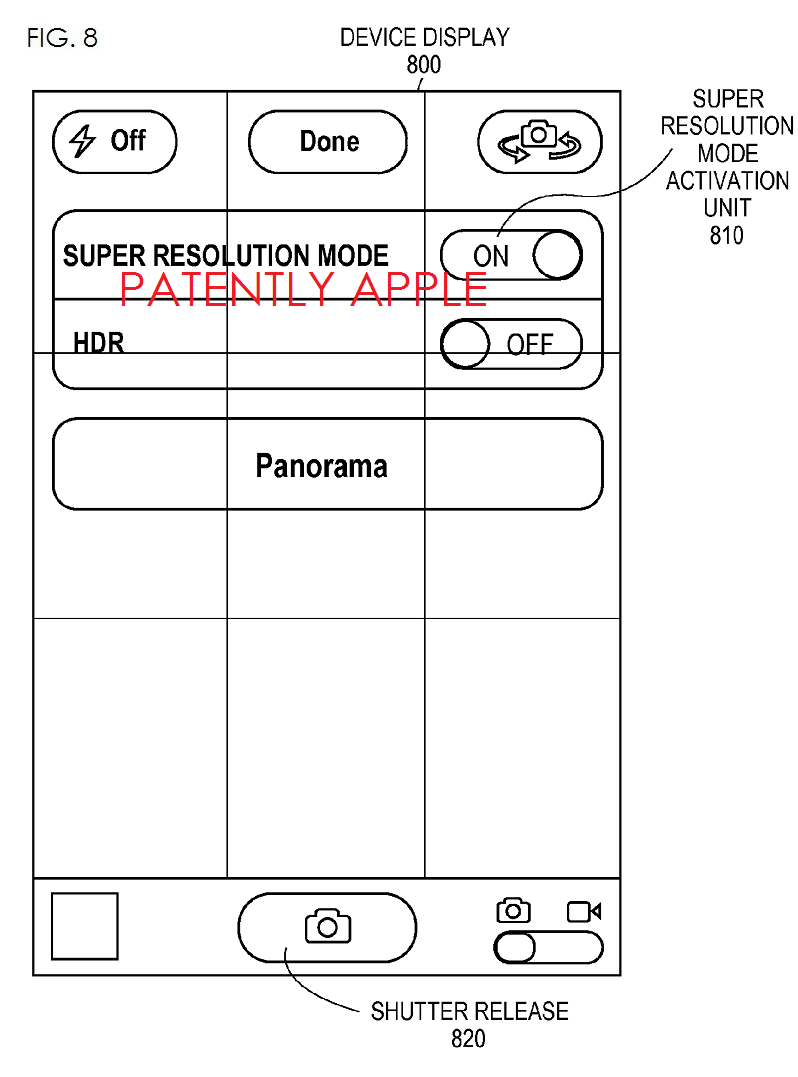 Apple credits Camera Software Engineer Damien Thivent and Richard Baer and as the inventors of patent application 20140125825 which was originally filed for in Q4 2012.

This is a highly technical invention that only true camera buffs could truly appreciate. For those wanting to investigate this invention further, see Apple's patent application.

Side Note: In Damien Thivent's Linkedin profile it's noted that one of the projects that he has worked on relates to a Digital Thermometer. Is Apple thinking of an in-home Nest-like thermostat? Only time will tell.