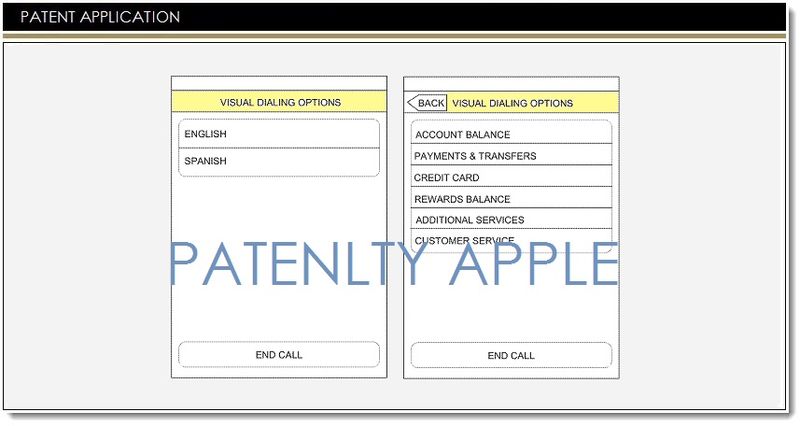 Last week the US Patent & Trademark Office published a patent application from Apple that revealed a new visual dialing method designed for your iPhone that could end audible menu-hell that we now have to deal with when calling a business such as our Cable Company, a bank, a utility company and so forth. Today when calling a business with your iPhone, you have to go through a maze of audio prompts to get you to the right department for assistance or to perform a simple task. This archaic system could one day be replaced with Apple's simple next-generation visual menu system so that businesses will be able to recognize that you're calling from a mobile device and send your iPhone a simple set of visual menu options so that you could determine the speed of the menu prompts that will get you to the right department quickly. The system is designed for businesses to set up via a cloud based service.

Mobile device users sometimes call customer support or technical support centers of businesses to obtain service or assistance or information regarding products that those users have obtained or are interested in obtaining from those businesses.

Mobile device users sometimes call customer report representatives in order to inquire about billed amounts that are due, or to make a payment on a bill, or to set up or cancel a subscription. Often, before a caller actually reaches a live human being on the other end of the call, the caller finds himself listening to automated, simulated or recorded voices informing him of his options. These voices typically instruct the caller to say a word or push a number on his telephone or telephone application in order to proceed to the next set of options. The caller might need to navigate through multiple vocally read sets of options before the caller finally reaches his desired destination at the call center.

Unfortunately, because voice communication is a sequential type of presentation by nature, a caller is often forced to sit through the audible rehearsal of various options in which he is not interested before finally being audibly presented with an option in which he is interested.

The caller usually has no control over the speed at which these options are audibly communicated to him through the speaker on his mobile device. Often, the caller will impatiently wait to hear all of the options vocally recited before trying to figure out which one of those options he ought to select.

Because audible communications are transitory in nature and not fixed on any tangible medium, the caller might forget exactly what some of the previously recited options were by the time the last option has been spoken; he might be forced to request that the entire set of options be repeated. This repetition is wasteful of the caller's time and irritating to the caller.

Various different businesses can register their various different finite state machines with the server in this manner, and can have their telephone numbers mapped to their finite state machines. These mappings, stored on the server, can be made accessible over wireless networks to multiple mobile devices such as cell phones, including smart phones.

In Apple's patent FIG. 2 noted below we're able to see a block diagram illustrating an example of a system through which businesses can register finite state machines with a server, and through which mobile devices can present visual menus instead of placing telephone calls to those businesses.

Apple's patent FIG. 6 is a signal flow diagram illustrating an example of a message exchange in which mobile devices can engage in order to initiate an interactive visual data session with a business that is mapped to a specified telephone number.

Apple's patent FIG. 7 noted above is a block diagram illustrating an example of a language selection user interface that a mobile device can present during an interactive visual data session as specified by a part of a finite state machine.

Apple's patent FIG. 8 is a block diagram illustrating an example of a main menu user interface that a mobile device can present during an interactive visual data session as specified by a part of a finite state machine.

In Apple's patent FIG. 9 noted below we're able to see a block diagram illustrating an example of a security authentication user interface that a mobile device can present during an interactive visual data session as specified by a part of a finite state machine, according to an embodiment of the invention. 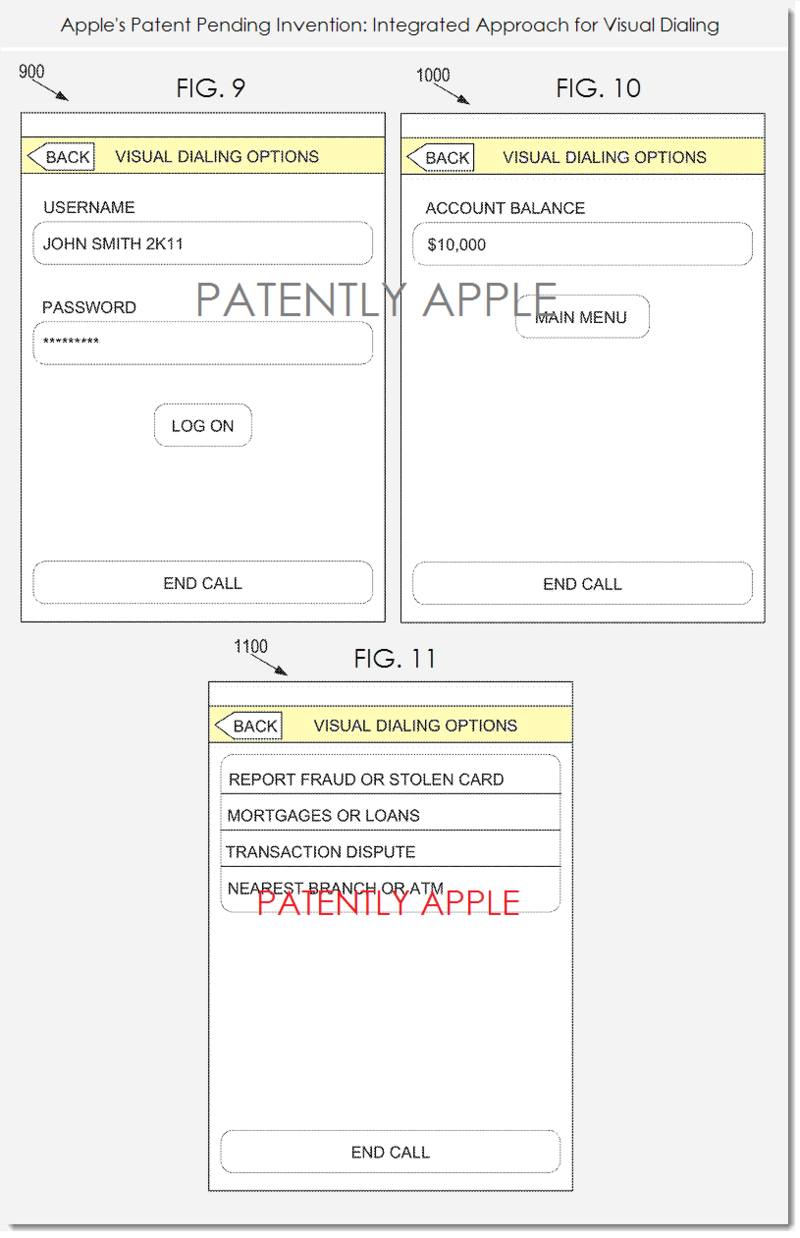 In Apple's patent FIG. 10 noted above we're able to see a block diagram illustrating an example of an account balance user interface that a mobile device can present during an interactive visual data session as specified by a part of a finite state machine, according to an embodiment of the invention.

Apple's patent FIG. 11 is a block diagram illustrating an example of an additional services user interface that a mobile device can present during an interactive visual data session as specified by a part of a finite state machine, according to an embodiment of the invention.

In an embodiment of the invention, an authentication finite state machine can call for the username (e.g., Apple ID) and password known to the payment service. The other service-providing businesses can trust this authoritative authentication so that they do not need to ask the user for his credentials separately relative to their own businesses, thus providing a "single sign-on" mechanism. Thereafter, the smart phone can allow the user to conduct transactions and make purchases relative to the other service-providing businesses using the payment service.

In another embodiment of the invention, a business desiring to use the visual dialing technique discussed above can create a customer service profile. This makes the business's contact information highly accessible. Various services on the user's smart phone, such as automated intelligent voice-recognizing agents (e.g., Apple Siri) can use such contact information in order to fulfill a user's requirements made using those services. Such contact information can also be made susceptible to bookmarking for future use.

Whether the system is specifically designed to work with iCloud or a combination of Cloud services is unknown at this time. But what we do know is that relief may be on the way to finally end audible menu-hell.

Apple credits Abhishek Sen and Toufic Haddad as the inventors of this patent which was originally filed in Q4 2012. Considering that this is a patent application, the timing of such a product to market is unknown at this time.