After the latest Patent Infringement case against Samsung was over we posted a report titled "Apple Wins Patent Infringement Case against Samsung that could be Worth More than $360 Million when this is all Over." Our report made the case that Samsung's infringement was "willful" and that the legal term meant that the Plaintiff-Apple could seek a treble or a tripling of the damages awarded. We made the case that Apple was using very specific language in their statements after the trial that supported that position. Well, Apple has filed a JMOL for Retrial where they are in fact seeking treble damages from Samsung.

Shortly after posting my report as noted above, I received a tweet mentioning my report by Florian Mueller. As you can see for yourself below, Mueller stated that "@PatentlyApple sometimes digs up interesting stuff but its claim that willfulness enhancements could triple the $120 is just off base." 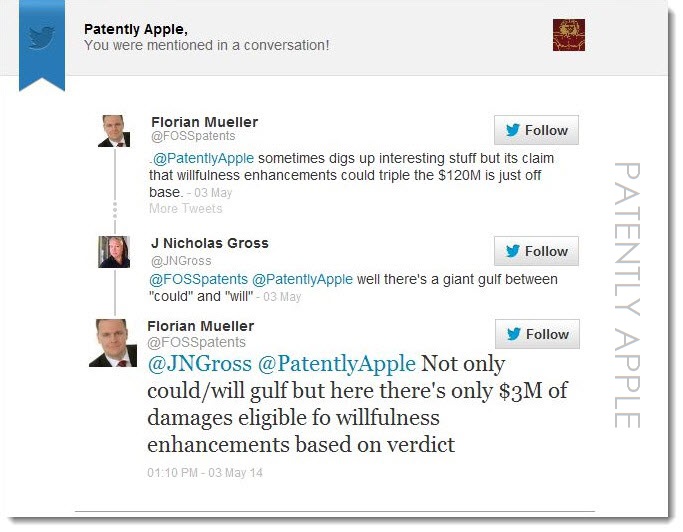 The Patently Apple report of course was simply making the point that Apple could seek such damages and not that they would win or be granted such. In the end, my report was correct being that Apple has filed the JMOL. In it Apple states the following:

"Apple is entitled to a new trial on infringement for the '414 and '959 patents (in the event that judgment of infringement is not granted); a new trial on willfulness for all patents other than the '721 patent; and a new trial on damages for all five of Apple's asserted patents based on Samsung's improper and prejudicial statements. Apple respectfully seeks a further order granting it (1) enhanced damages of $203,362,500, bringing the total award to $322,987,500; (2) supplemental damages through judgment; and (3) prejudgment interest of $6,468,029 through July 10, 2014, with an additional $11,040.36 in prejudgment interest for each additional day prior to entry of judgment."

In the end, our original report about the possible tripling of damages was right and the "patent expert," – well, let's just say that he had a bad day. It doesn't mean that Apple will win, but that's not what our report claimed.

If Willful infringement is to ever matter, this is the case. Only time will tell how Judge Lucy Koh will rule on this matter, but I'd be liar if I didn't make it clear that I'm rooting for Apple on this one.

Patently Apple presents only a brief summary of certain legal cases/ lawsuits which are part of the public record for journalistic news purposes. Readers are cautioned that Patently Apple does not offer an opinion on the merit of the case and strictly presents the allegations made in said legal cases / lawsuits. A lawyer should be consulted for any further details or analysis. About Comments: Patently Apple reserves the right to post, dismiss or edit comments. See our Legal Archives for other patent infringement cases.