Apple Could be on the Verge of Acquiring Beats Electronics

The Financial Times is breaking the news that Apple is closing in on its largest ever acquisition with the planned $3.2bn purchase of Beats Electronics, the headphone maker and music streaming operator founded in 2008 by music producer Jimmy Iovine and the hip-hop star Dr Dre.

The deal could be announced as early as next week, people familiar with the negotiations said, but they cautioned that some details had yet to be agreed and talks could still fall apart.

A deal on the scale being discussed would represent a radical departure for Tim Cook, chief executive of the iPhone maker: under the late Steve Jobs, Apple was reluctant to pursue high-profile acquisitions.

The Financial Times reports that "Apple will acquire Beats' streaming music service, which launched this year, and its audio equipment business, which includes its brand of headphones and audio equipment. The Beats management team will report to Mr. Cook, said people familiar with the deal. Apple and Beats declined to comment.

While Beats commands a leading position in the premium headphone market, its real value to Apple is in revitalising its "cool" at a time when iTunes has waned in popularity and Samsung's marketing campaigns have savaged the iPhone's brand. 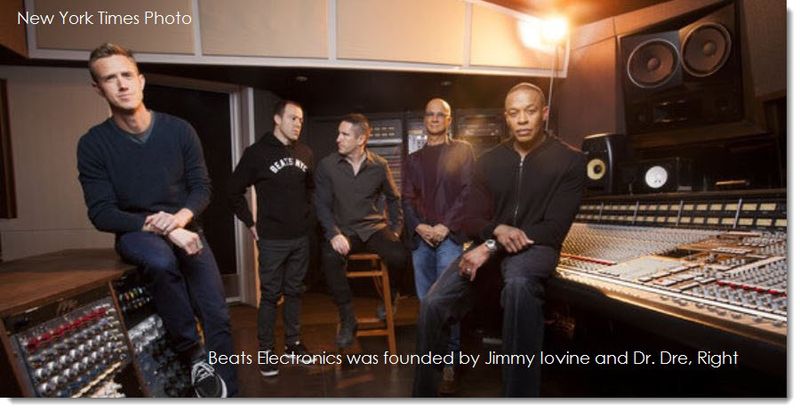 Mr. Cook said last month Apple was "on the prowl" for more acquisitions, after buying 24 companies in the past 18 months and he was not averse to large acquisitions.

One motivation for the Beats deal may lie in shifts in music consumption. Subscription services are the biggest growth area for the music industry, with revenues increasing 50 per cent to $1.1bn in 2013, according to a recent report by the IFPI, the global music industry association."

Forrester analyst James McQuivey notes that "This is really puzzling. You buy companies today to get technologies that no one else … or customers that no one has. They must have something hidden … under the hood."

Iovine's history is interesting. In the early 1970's James (Jimmy) Iovine became a recording engineer, working with John Lennon, Bruce Springsteen, among others. By 1973, Iovine was on staff at the New York studio the Record Plant, where he worked on Springsteen's Born to Run and Meat Loaf's Bat Out of Hell albums. He came to prominence via his work on the 1978 Patti Smith album Easter, which included her Top 40 hit, "Because the Night". He teamed with Tom Petty and the Heartbreakers on Damn the Torpedoes and U2 on Rattle & Hum. Iovine also produced Bella Donna (the first solo album for Stevie Nicks), Making Movies for Dire Straits, and Get Close for The Pretenders, in addition to many others.

Dr. Dre has a background in producing Rap artists. With Dr. Dre and Iovine's impressive music history, perhaps Apple is thinking outside the box in this acquisition and beyond music streaming. For now however, it's still not a done deal.

Illustrated below is a nice chart from The Financial Times covering some of the larger  acquisitions that Apple has made from 1997 until the present. The chart doesn't include some of Apple's other interesting acquisitions such as the recent LuxVue or Embark or others. 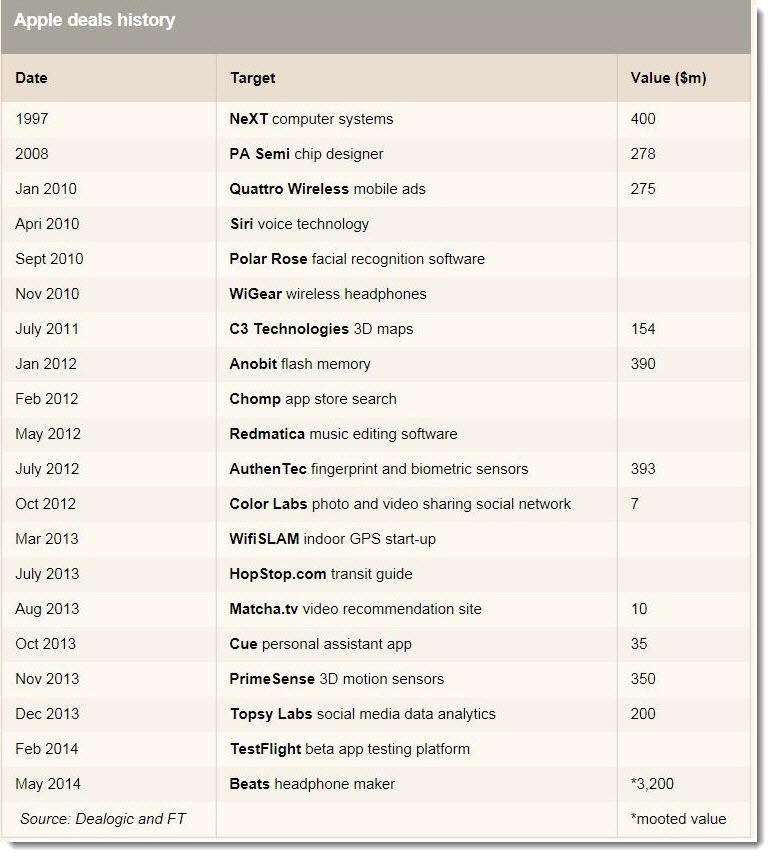