In early March we posted a report titled "New Super Bright Nano-Dot Coatings for Sapphire Substrates came to light in Japan this Week." The report covered new ways that sapphire substrates could be used in next generation display backlights. Our cover graphic illustrates just how much brighter a display could be using sapphire as a key substrate while realizing lower power consumption. Yesterday the news of Apple acquiring LuxVue came to light. LuxVue is a specialist in micro-LED screen technologies. Venture Capitalist John Doer of KPCB described LuxVue's technology a "technical breakthrough in displays." Our report today provides technically savvy Apple fans with links to each of LuxVue's 21 patents that are on record so that you could explore the technology that Apple has just acquired. One of the common elements that LuxVue shares with the bright display technology noted in our cover graphic is that both use of a sapphire substrate.

One of the patents of interest from LuxVue contains a patent figure as noted below. LuxVue states that in FIG. 1(A), "a semiconductor device layer 110 may be formed on a substrate #101. In this particular embodiment, growth substrate 101 is sapphire, and the p-n diode layer #110 is formed of GaN. Despite the fact that sapphire has a larger lattice constant and thermal expansion coefficient mismatch with respect to GaN, sapphire is reasonably low cost, widely available and its transparency is compatible with excimer laser-based lift-off (LLO) techniques." 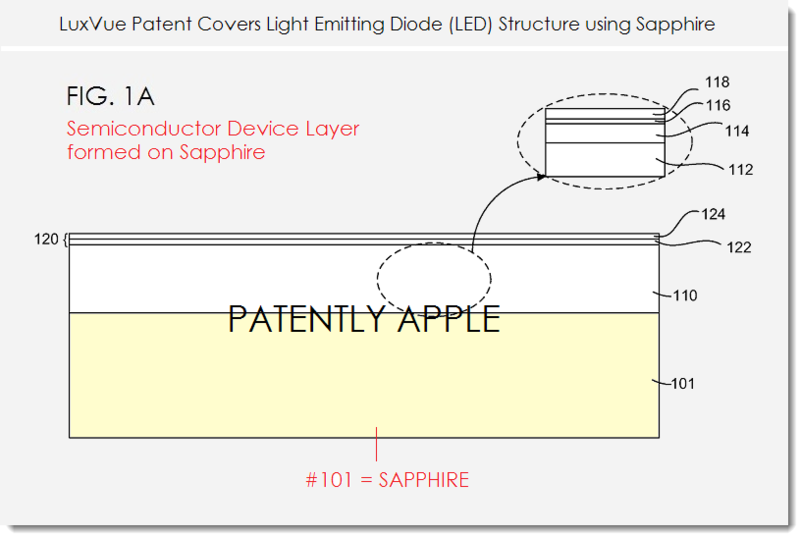 In another patent, their patent claim #22 states that "the method of claim 20, wherein the p-n diode layer comprises gallium nitride (GaN) and the growth substrate comprises sapphire." In total, four LuxVue patents include the use of a sapphire layer in a semiconductor device.

With Apple's acquisition of LuxVue Technology they instantly gained 21 patents. Of those, thirteen are granted with another eight that are patent-pending. Listed below are LuxVue's thirteen granted patents that were issued by the US Patent Office. The titles that are noted in red are those that briefly describe sapphire being used in a device layer as we noted above in LuxVue's patent figure.

8,518,204 Method of fabricating and transferring a micro device and an array of micro devices utilizing an intermediate electrically conductive bonding layer

8,558,243 Micro device array for transfer to a receiving substrate

20130210194 Method of Transferring and Bonding an Array of Micro Devices

Whether the use of sapphire in new display technology is one of Apple's secret projects is unknown at this time. It could be for advancing Apple's Retina Display, be a part of new a display for a wearable device or simply for a display cover.

Yet with so much buzz surrounding Apple's new Sapphire plant, the fact that LuxVue uses it for their advanced display technology could be very telling. Yet only time will tell what the ultimate end game is for Apple's sapphire plant and the next great thing that it's designed for.