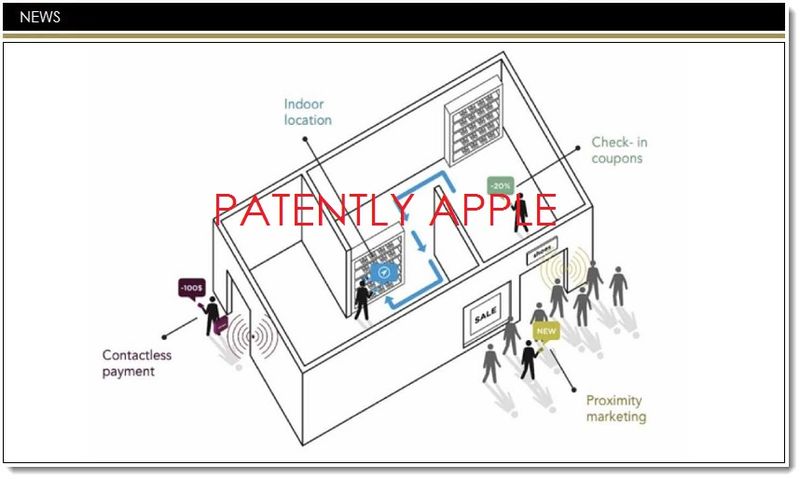 If developers are wondering what platform to choose for their beacon technology rollout, it's a no brainer. The current score has 87% of iOS devices ready and 2.5% of Android devices ready at this very moment. Here's a trend Google apparently never saw coming. A new slideshow is now available that can provide everyone with the ABC's of beacon technology and applications. It's not iBeacon specific, but it does illustrate Apple's iOS dominance in this area of technologies. 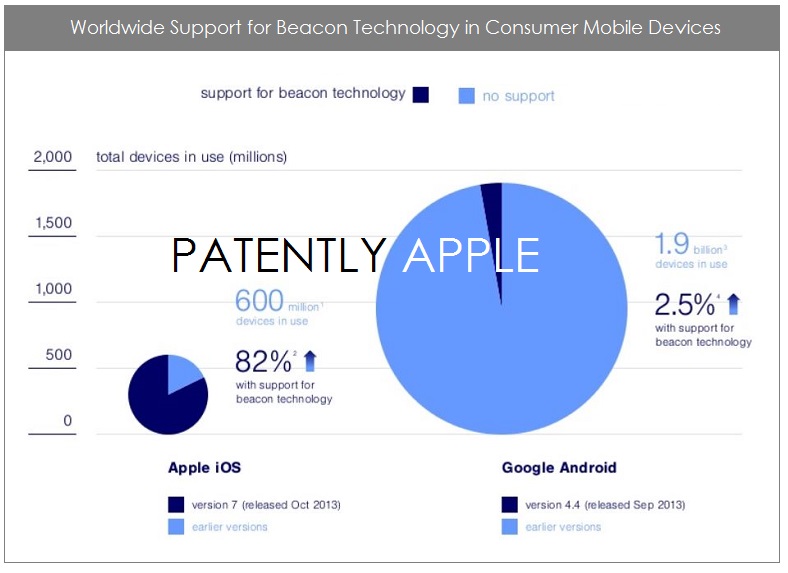 In one key slide of a new slideshow noted above, we clearly see that Apple has a crippling lead when it comes to iBeacon technology built into smart mobile devices. Although the chart illustrates an 82% score for iOS, it's actually now 87% as that is what the adoption rate for iOS stands at currently according Apple's own website counter. But for the sake of comparison with Android devices we'll stick with chart's stats so that we can fairly say that by Mid-March 2014 this is where iBeacon stats were at.

Samsung's Attorney's this week were trying to score points against Apple at trial by stating that iOS was behind on NFC. Ha! The US Patent Office is on record showing that Apple has been working on NFC before Android. Apple has yet to integrate NFC technology into iDevices because there's been no use for it until recently and Apple is working with several competing technologies like iBeacon. For the record, Apple's patents usually state that they may use NFC or alternatives, and so they did.

iBeacon technology may very well prove out over time that it's simply superior to NFC. So wailing at trial that Apple is behind on NFC is once again smoke and mirror tactics by Samsung's attorneys. In reality, It's Google who's desperately behind iBeacon where there is a new booming market. Apple's iBeacon could be used in future indoor location apps in addtion to check-in coupons, proximity marketing and much more

Our cover graphic illustrates that iBeacon will work with contactless payment systems, so Apple will have the choice to use iBeacon for a future iWallet application should they choose to support this kind of application in the future. Yet with the recent Heart Bleed bug creating havoc this past week, some have voiced concern about e-commerce apps like electronic wallets being too vulnerable at this point in time. Time will tell how that plays out, but iBeacon goes far beyond the narrow scope of electronic wallets.

On Friday I posted a report titled "Apple's iBeacon Begins to Rock the Market with More on the Way," which showed how Major League Baseball, restaurants, cafes, retail stores and grocers are using iBeacon which has iDevice users as the winners. Some of the largest US retailers are now choosing to roll out iBeacon projects over NFC, and for good reason.

At the end of the day, the latest information is showing us just how large a lead Apple has over Android devices when it comes to iBeacon technology and it's just a fact.

If you're interested in a quick and basic rundown on Beacon technology, then check out this English presentation slideshow called "Beacon Solutions – Technology for Real World Retail" by German specialist Stefan Wolpers. It's very informative. Another great source of information and specifically for iBeacon can be found here in multiple presentations.