Samsung's New Snake Oil is now on Sale: Smartwatches will be as popular as Apple's iPad … Soon

With all the hype about electronic health bands and the iWatch, Tim Cook's initial leeriness about consumer wearables in the form of a wrist band watch may have been more plugged in than you might think. At last year's D11 conference (between the 19-21 minute marks of the Walt Mossberg interview) Cook grumbled at the idea of a watch of any kind, though later admitted that "other wearables" could be interesting down the road. Today, a survey showed that only 4% of UK consumers are interested in a wearable device like a Samsung Gear smartwatch. That's not to say that Apple couldn't create an iWatch and take the whole category to new level like they did with smartphones. Yet for now the data confirms Apple's initial research that ten to twenty year olds have no interest in wearing anything on their wrists as Cook eluded to. Apparently Apple's head-fake put Samsung on the fast track to nowhere. Report Updated March 11, 5:20 AM PST.

According to research Samsung undertook with YouGov, which polled 3500 people, around 4% of the UK currently owns a wearable - that's anything from Nike's FuelBand to Fitbits and Jawbone fitness bands to smartwatches from Samsung and Sony.

Despite this dismal number, Samsung's IM Strategy & Mobile Product Marketing executive James White is under the grand illusion that their Galaxy line of smartwatches is on the verge of an explosive market … soon … as big as the iPad was for Apple. Okay, this is your cue to now choke with laughter, seriously.

According to Mr. White, while smartwatches, fitness bands and Google Glass are quite a niche right now, he believes that the demand is about to nearly quadruple. I guess if they give them away with boxes of cereal it just might work out to be true.

Samsung sees the current dismal 4% consumer demand for smartwatches magically leaping to 60% with no explanation whatsoever of how that's to occur. Better yet, they think that Apple will have to basically sit at the back of Samsung's bus this time around when they decide to get in on smartwatches because big bad Samsung owns the bus with a frightening low single digit market share lead: oh my. If you happen to like the scent of quality snake oil, you can find more of it here. 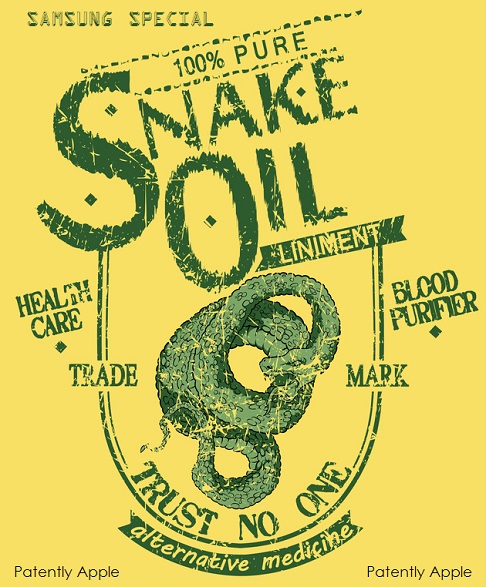 Yet beyond Samsung's snake oil PR and their work with YouGov, there is some credible evidence that wearable computers is likely to be a market trend worth noting. However, even IDC admits through their upbeat "forecasts" that the wearable market has had difficulty gaining traction in the market. While the IDC report spouts a lot of hope, they realistically acknowledge that many smart accessories aren't ready for prime time.

The total sales for wearables in 2014 is only "forecasted" to hit 19 million units spread across 6 or more companes selling multiple versions of their wares. Even if that forecast is hit, that only works out to about 3.2 million units per company. That's not exactly a gigantic market forcing Apple to chase right now.

Yet even IDC has a sense of humor. One aspect of their IDC ConsumerScape 360° report survey of more that 50,000 consumers in 60 countries, Samsung was identified "as the most trusted brand for wearables, ahead of Apple, Sony, and Google." Okay, that was funny and funnier yet because Apple isn't even in the wearables market yet. Which of course makes you wonder what trick question IDC used to garner such a response.

In the end, there's a lot of noise surrounding the wearable computer market with very little statistical proof to justify it as being successful in any meaningful measure at the moment. Perhaps when Google Glass enters the market that might change. Yet even the success of that, beyond it's intial first quarter success, is in question. For now, expect more PR from Samsung trying to drum up consumer demand in the wearables space, that for the most part, is nonexistant at the moment.