A new Korean report published today states that Samsung Electronics is expected to record an operating profit of 8.4 trillion won ($7.9 billion) in the first quarter, down 4.33 percent from a year ago, as the result of slow smartphone sales growth. The estimate did not provide figures for each of its business divisions. These will be made public in the last week of April. Yet looking forward, analysts are seeing the coming smartphone pricing wars being a negative on Samsung's bottom line going forward.

Analysts have shown mixed reactions about the first-quarter performance. They said that the figures are mostly in line with the market consensus of 8.4 trillion to 8.5 trillion won but raised concerns about the high dependence on smartphones.

In a short-term strategy to boost profits, Samsung plans to promote its Galaxy S5 smartphone, which will go on sale globally from Friday. Yet will it really make that much of a difference considering that the Galaxy S5 made a weak start at home.

While some analysts are hoping that Samsung will bounce back in the latter half of this year after going through another sluggish quarter between April and June, other analysts are raising questions about whether Samsung's aggressive pricing plan for the latest handset will fully pay off before Apple's new mobiles will be introduced sometime in the second half of the year, officials said.

In light of these pressures, a senior hedge fund manager based in Seoul stated that "We recently advised our big clients to sell Samsung Electronics stocks because most profit is coming from smartphones. Other than these, we don't see any positive factors that can lift Samsung's profit." Ouch. The hedge fund manager added that "Demand for TVs remains weak and the appliances market is heading towards an unfavorable season.

Mark Newman at Bernstein Research in Hong Kong stated that "At current valuations, the market is assuming the mobile business will destroy value going forward."

"Samsung has been consistent in putting competitive hardware specifications in flagship models. But its focus is now on pricing as budget phones are gaining popularity. Samsung will continue to stick with 32-bit processors for the next Galaxy Note 4 and skip 64-bit for another year, partly due to Google not having a 64-bit version of Android available.

The report also noted that "Samsung, embroiled in legal feuds over smartphone patents with Apple, is estimated to owe the iPhone maker some 300 billion won." It's obviously a negative for the stock at the moment.

Nokia could spell Trouble for both Samsung and Apple going forward

It should also be noted that while Samsung is focused on the budget phone market, they will be deeply challenged in this segment of the market by Nokia that will be coming on strong with great products and killer prices starting in May. Nokia is basically declaring war on Samsung and it will have an effect on Samsung's bottom line going forward. The pricing is so aggressive that Samsung will have to lower prices more than they want to admit to.

With that being said, Nokia is equally planning an aggressive attack on Apple over the summer with very aggressive new mid to high end phones in the May-June timeframe aimed at the iPhone 5S and iPhone 5C.

Both Samsung and Apple are going to have to deal with the Nokia-Microsoft invasion into the market with killer pricing. Microsoft is rolling up its sleeves and wants to make their mark this year with their acquired Nokia. Though their advantage, at least against Apple, could be short lived as Apple's new game plan for the iPhone is likely to shift dramatically later this fall with one, if not two new iPhone models.

Apple's flagship iPhone is rumored to carry a more radical design. Apple is more than aware of how the market is shifting. An in-house marketing slide revealed in court last week showed us that Apple understands that the smartphone market is shifting quickly to both cheaper phones and those with larger displays. 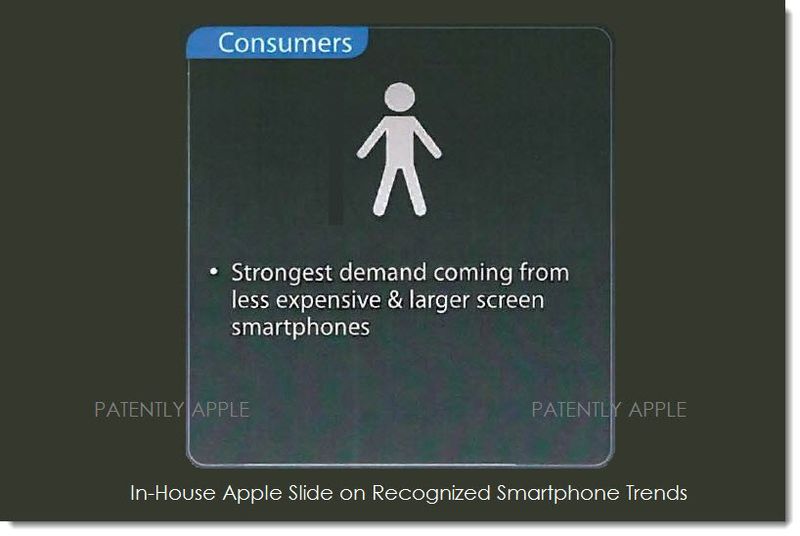 As smartphone trends shift in the marketplace, Apple has a number of tangibles that other competitors don't have. Firstly, they have one of the loyalist fan bases on the planet. Secondly, Apple's flagship iPhone is the bestselling smartphone on the market today in all major markets due in-part to the design savviness of Sir Jonathan Ive. Thirdly, Apple's iTunes Store is still the best online store for music, apps and games. There are more apps on Apple's App store than any other online store today. Fourthly, their user interface is still the coolest out there in terms of quality graphics and functionality – not to mention 99% more secure from malware than any Android smartphone on the market.

That doesn't mean that Apple will be completely immune to the pressures of the market that are earmarked for the second half of 2014, but we know from Apple's noted presentation slide, patent filings and rumors that Apple is going to deliver some awesome new iPhones and other surprises to market that will offset the coming tidal wave of cheaper phones. Although time will tell, I think that Apple is likely to fair much better than Samsung in the all-important holiday quarter this year.

While the market has traditionally looked to see what Samsung was going to do to compete with Apple, I think this year we'll be hearing a lot more about what the Microsoft-Nokia tag-team will doing to compete against Samsung and Samsung's declining bottom line. By challening Samsung's Android line, Microsoft is likely hoping that Samsung will put more emphasis on selling Windows OS phones. Nothing like poking your partners in the eye every once in awhile to get their attention.

For years analysts have praised Samsung for being a junk and smartphone "volume leader," because Apple wasn't willing to play in that game. But the world is changing and Nokia is preparing to charge at Samsung like a freight train at full speed.

The days of Samsung having no competition on the lower-end of the market, which is what made made them look like a winner, is going to be greatly challenged going forward. This is why some analysts are telling their larger clients to bail out of Samsung's stock before the bottom falls out. This current quarter is only down marginally, but it's the larger slide in the making that has the market a little jittery about Samsung's smartphone leadership going forward.

In the end, you know that Samsung sees the writing on the wall when they have to resort to suing a newspaper for publishing a negative review of their new junky Galaxy S5 smartphone. It's unheard of and a clear and honest sign that they don't really have any confidence in their latest Galaxy S5 smartphone.

In my view, this is a marketing and corporate blunder! Their fear is so thunderously loud by this move that it's no wonder why analysts are telling their larger clients to bail on this stock. Wouldn't you?