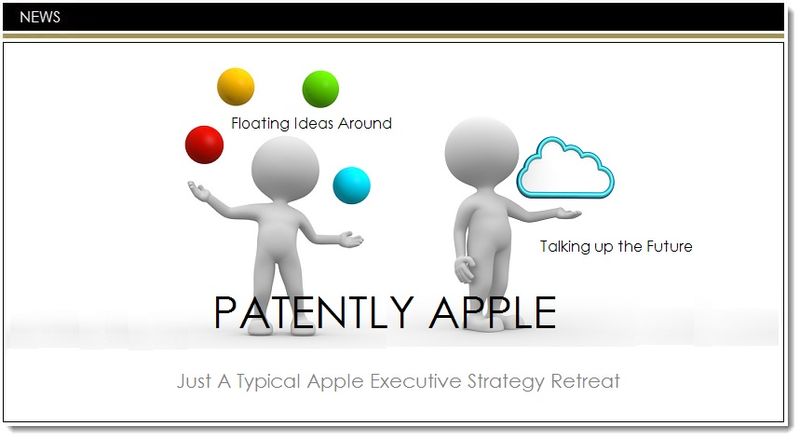 In the second California Apple v. Samsung patent trial that began this week, Samsung submitted a series of email exhibits from Apple discussing their product road-map that would be discussed at their "Top 100" executive sales retreat where the best minds of Apple would annually brainstorm for the year ahead. Samsung attempted to make hay with a single entry in these emails about a "Holy War with Google." Yet in context and under scrutiny their argument fails to have any punch whatsoever. Once again, Samsung has decided to shoot for theatrics. It may work in the press for a day or two, but in the end it's just dust in the wind; a feckess exercise.

The San Jose Mercury Press, blogging daily from the California court house about the Apple-Samsung patent trial, noted Samsung's lawyer highlighting a 2010 email from Steve Jobs that had a talking point noted as "2011: Holy War with Google." Samsung's exhibit # 489.245 with that note is presented below in full. Samsung is obviously hoping to make the point of a Holy War with Google a dramatic point in their closing argument in the trial. It's really why they introduced this email into evidence.

Yet if the jury actually gets to see this string of emails that we present to you in full below, then the big point that Samsung was trying to score points with will be seen as nothing in the total context of Apple's full sales meeting agenda of talking points for their sales retreat. 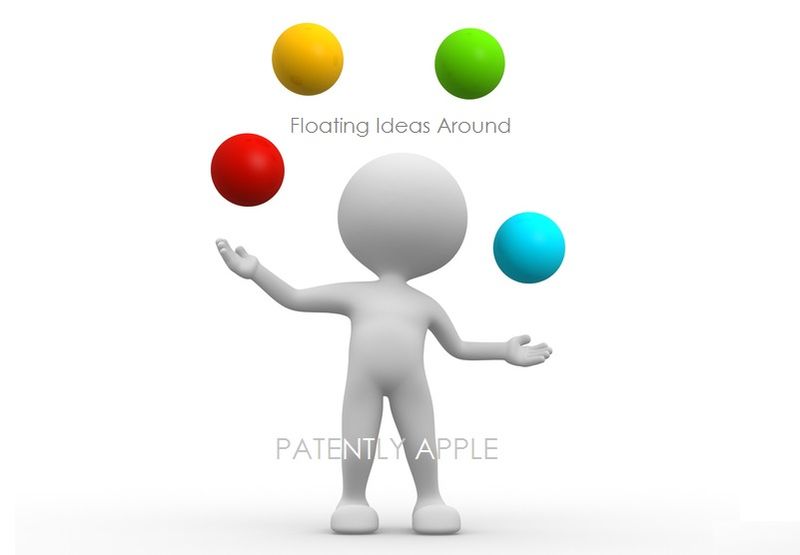 If any of the jurors in this trial have ever been to a company retreat to talk about new ideas and hash out problems, then this is no big deal. It's one point in a sea of points about what could be next for Apple. Steve Jobs was a CEO who used colorful language to drive home points. Did Steve go on and on about that one point of a Holy War? No. In fact the point made was in context with his follow-up point regarding Google: "All the ways we will compete with them." Wow, some holy war agenda that is.

Isn't that kind of a typical talking point made by any other company competing in the mobile space at an annual sales meeting? How to compete with Apple or Samsung or Google or others? Yes of course. That's what you talk about at sales retreats. There's no punch to this entry made by Samsung's attorney – unless of course you've never seen a sales and marketing team meeting agenda in your life. But I'm sure one or more of the jurors will be able to put that into context for the other jurors.

In the first Samsung email exhibit (illustrated below), we see that it's from Michael Tchao, Apple's VP Product Marketing who once worked on Apple's Newton, and Phil Schiller, Apple's Executive VP of Worldwide Marketing. So it's an email between to marketing executives talking about Apple's CEO Steve Jobs email about the upcoming annual executive team strategy retreat.

Jobs also want to lay out some focal points for his executive team. What's Apple's focus going to be: He jots down things like – Apple invented the "Digital Hub" and 2011 will be the year to promote iCloud. 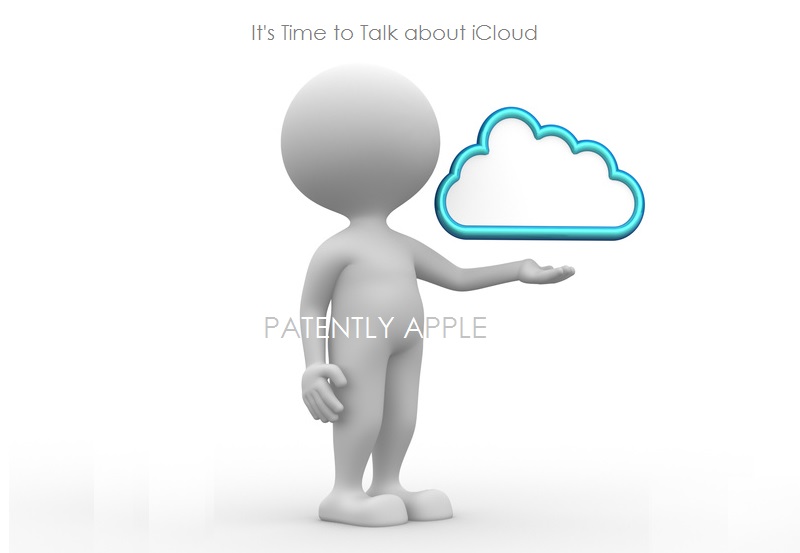 And, like any meeting of this kind, he notes that Google is their top competitor in the mobile space and uses the term Holy War to drive that point home But Steve also stated shortly afterwards that "Google and Microsoft are further along on the technology but haven't figured it out yet." That was a talking point in Samsung exhibit 489.246.

So we see that Apple was cognisant of Microsoft being capable of resurrecting and that they had to further tie their iDevices together to strengthen their ecosystem which he later identifies as the iPad 2 and iPad 3, the iPhone 4S identified as the "Plus" iPhone 4 (that was released in 2011). He points to wanting a slide comparing Google, Samsung, HTC, Motorola and RIM. Standard stuff, pointing to competitors and wanting slides to make sales points as to why Apple's iDevices are better. It doesn't sound like much of a holy war agenda here, just plain old sales and marketing talk.

There was no "Evil" intent. There was no Holy War agenda out of the ordinary discussed to quantify that point as meaning anything out of the norm at a typical strategy retreat. No, it's just Samsung desperately grasping at straws (depending on something that is useless). It's just Samsung trying to pre-emptively discredit Phil Schiller's testimony. 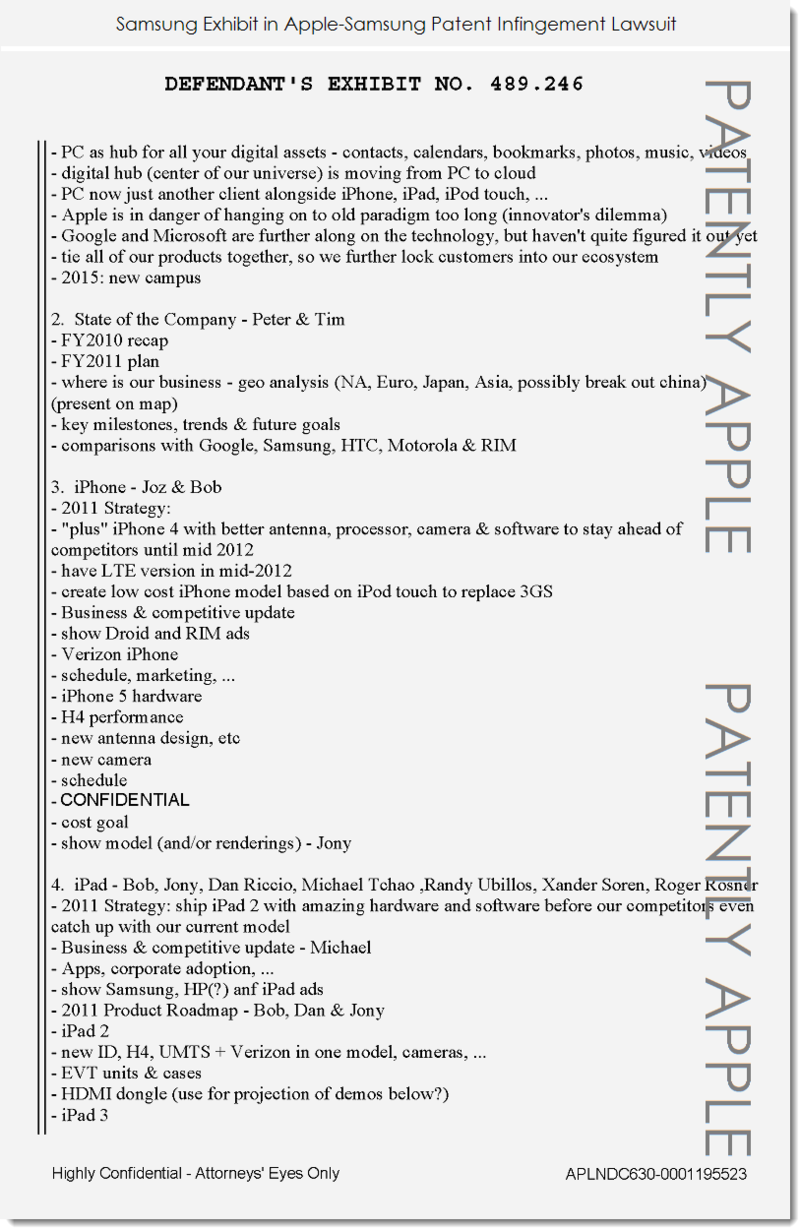 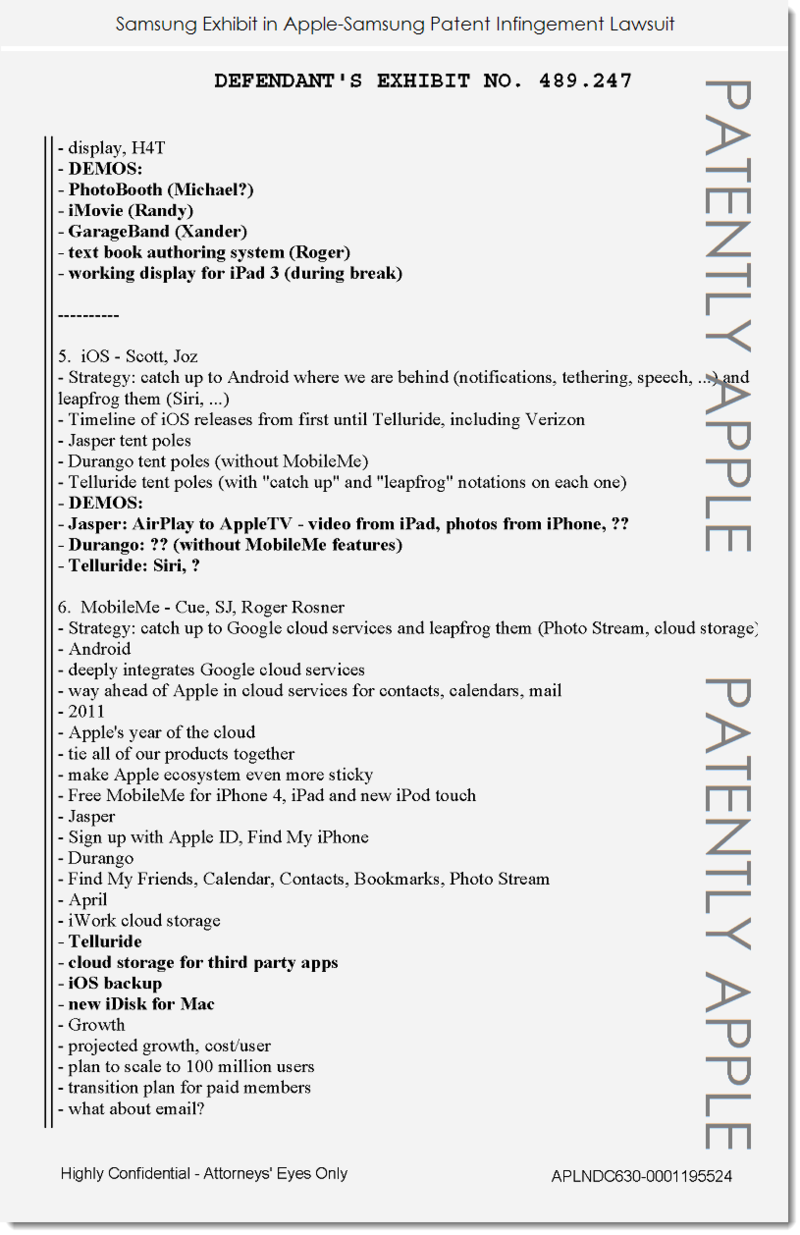 In the last Samsung Exhibit #489.248, Samsung actually did the Apple community a favor by allowing us to take a peek at some of Apple's thinking about where their Apple TV hardware could be headed.

Jobs was kicking around the idea of TV subscriptions and "making a great accessory for iOS devices," which he later reveals as being a future Apple TV "magic wand." The TV magic wand wasn't an off-the-cuff idea to talk about. This was something that Apple had been working on in patents since at least 2009. We covered a second patent application in 2010 where the illustration below is from. 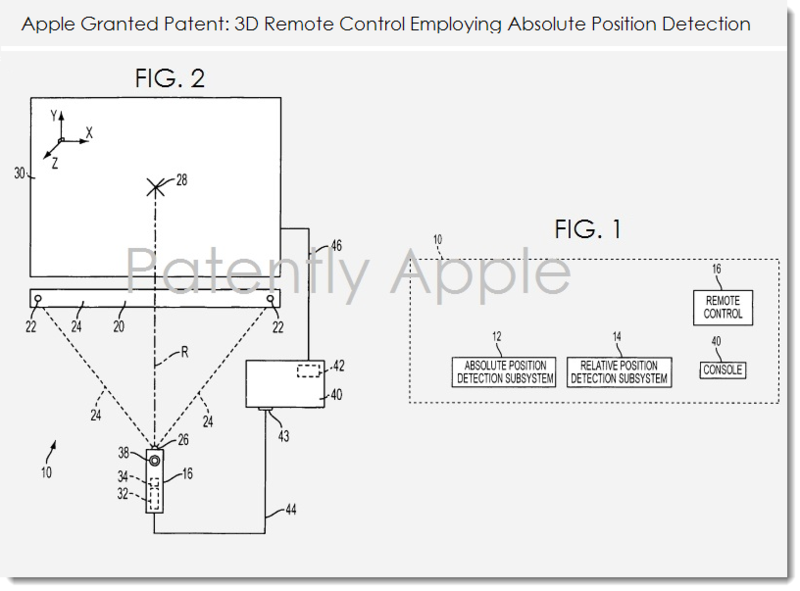 Prior to the trial beginning, Apple was granted a patent for their 3D remote or Magic Wand. In that report we stated that "While we may not be getting an Apple centric HDTV anytime soon, perhaps we could look forward to Apple's 3D remote on the horizon." If the magic wand was on Apple's 2010 strategic agenda of possibilities, we know it was a product close to finishing at that point in time. Could this magic wand be closer to market than we first thought? Perhaps - but only time will tell.

Though as interesting as Apple's magic wand may be, the fact remains that this series of Apple emails presented before the court this week was to make a big deal about Apple's Holy War against Google single line entry in a very long sales meeting agenda. It definitely didn't show that this "evil" point had any dire consequence associated with it. Google was simply one of the many competitors that Apple's Steve Jobs pointed to, including Samsung. Did Steve Jobs simply like to take a kick at his favorite competitor? My, my, how extraordinary, bring out the guillotine.

In the end, the dramatic point that Samsung's attorney was striving to make to stir up the jury was nothing but a point that the pro Android press would play up and did. Yet in the big picture called reality, it boiled down to just one word: