According to a Korean press source, a new standalone variant of the Samsung Gear 2, equipped with a universal subscriber identity module, or USIM, will likely be christened the Samsung Gear Solo. Samsung Electronics and SK Telecom are jointly preparing to release the new smartwatch.

According to the Korean Intellectual Property Office, Samsung has filed for the trademark for the "Gear Solo" brand name. However, the branding is reportedly still under scrutiny by internal Samsung executives. Patently Apple was able to obtain information on the brand name from the Korean IP office as noted in our graphic below. 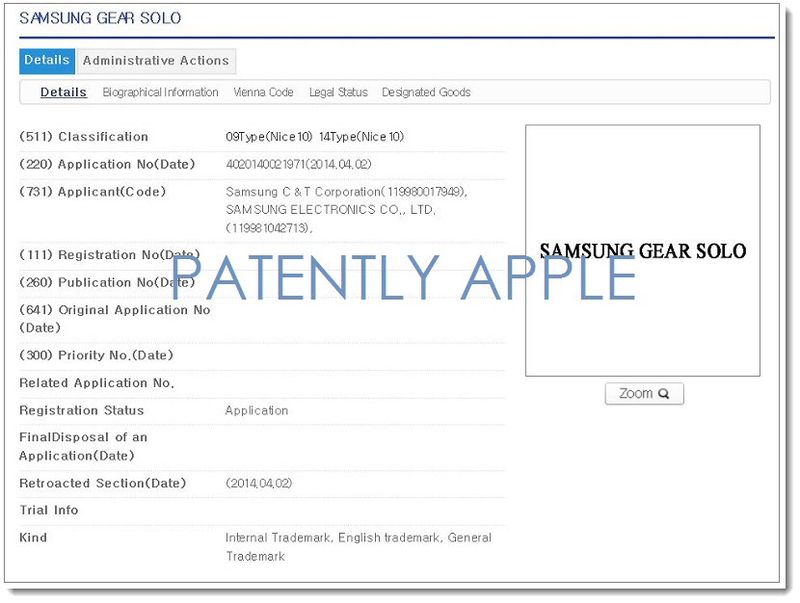 As the name indicates, the wearable device will enable users to make and receive calls without syncing it with smartphones.

An SK Telecom source had previously said that the new model would at first be available only in Korea, but did not rule out the possibility of a release in overseas markets.

The Financial Times reported back in March that Jean-Claude Biver, the president of LVMH’s watches and jewelry division, said Apple had tried to poach staff from his Hublot brand, and from several Swiss parts manufacturers. Mr. Biver recently told a Swiss publication that "Apple has contacted some of my employees – I saw the emails personally." He later claimed that all of those who were contacted refused Apple's advances.

The first sign of Apple considering an iWatch or wristband computer surfaced in a patent application approximately fourteen months ago. Apple had been working on it prior to Q3 2011 which was way before any talk from any other mobile device manufacturer surfaced, including Samsung.

However Samsung, the self-proclaimed "fast-follower," raced ahead of Apple with their Gear smartwatch. The New York Times called Samsung's first smartwatch a "Human Interface Train Wreck," and it very quickly was acknowledged as an epic flop.

Presently, Samsung continues to refine their smartwatch designs and have actually designed a spin-off device called "Gear Fit." Samsung's Gear Solo is yet another attempt to quickly diversify their smartwatch device family for the consumer and dominate this segment of the market.

However, that's nice in theory, but reality is saying that consumer demand for smartwatches is still wavering, mainly because of the bulk of the device, its uninspiring design and lack of a killer application to create demand.

Will Apple respond with an iWatch-like this year? At the moment, it doesn't look like Apple has prioritized such a product, but only time will tell.