Last week we posted a report titled "Samsung's New Snake Oil is now on Sale: Smartwatches will be as popular as Apple's iPad … Soon." In that report we stated that With all the hype about electronic health bands and the iWatch, Tim Cook's initial leeriness about consumer wearables in the form of a wrist band watch may have been more plugged in than you might think. At last year's D11 conference (between the 19-21 minute marks of the Walt Mossberg interview) Cook grumbled at the idea of a watch of any kind, though later admitted that "other wearables" could be interesting down the road. In fact a recent survey showed that only 4% of UK consumers showed any interest in a wearable device like a Samsung Gear smartwatch. Now to make matters worse, Nike secretly lowered the boom last week and dismantled their FuelBand wearables team.

In Cook's famed interview with Walt Mossberg he noted that Apple's initial research found that ten to twenty year olds have no interest in wearing anything on their wrists.

C/NET reported late today that 70 to 80 percent of Nike's FuelBand team will be on the chopping block. Word of the firings made its way to Secret.ly, an anonymous social network for gossip centered on the tech industry, as far back as a week ago as noted below. 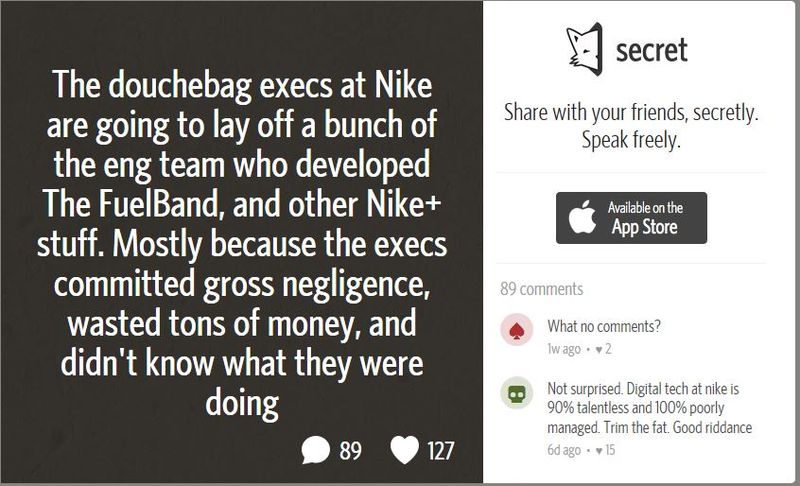 While Nike was dismantling their hardware team Last week, they announced the launch of its San Francisco-based Fuel Lab. The testing space, born from its accelerator program, will join Nike's slew of other innovation-branded R&D havens where companies will be able to design hardware products that incorporate the company's proprietary point-based workout metric, NikeFuel.

CNET further noted that "Essentially, it will be an incubator for FuelBand successors, as long as they plug in to Nike+, for which Nike is publicly releasing an API this fall."

As Nike redirects its wearable efforts toward software, CNET surmises that "it's avoiding the competition from a bevy of new devices that will further crowd the market, namely the Apple "iWatch" and devices running Google's recently unveiled Android Wear operating system."

As we noted in our report last week, the data on wearables just isn't matching the hype in the tech press and from other high profile research firms. Apple's CEO Tim Cook made it absolutely clear that he couldn't see a meaningful mass market (10-20 year olds) for anything on the wrist – and yet the reports of the iWatch continue to be rumored each week.

Is Nike's decision to bail on their hardware a way for Apple to pick up the ball and work with Nike as they did with Nike + iPod? Apple is under a lot of pressure to introduce new category products to satisfy Wall Street and this might work.

Yet on the other hand, Cook and Apple may have gotten it right all along on the hyped wearables-market by taking the position that there really isn't great demand out there for wrist bands and watches at the moment. It's one or the other and we'll know by the end of the year which way the sand shifted in the hour glass. For now, at least on paper, it doesn't look promising for the mystical iWatch – though opportunity has just knocked on Apple's door.

Which way do you think that this is going to play out this fall? Send in your comments below.