According to a new Kantar Worldpanel report published today, the data clearly shows that Apple users are high quality users and lead the trend of multi-screen adoption. What's interesting about the study is that the trend appears to be occurring in urban China – one of the most important mobile markets in the world.

For either iOS or Android, there's an app for almost everything nowadays. As a result, mobile devices like tablets play an important role in our lives. Desktop computers and laptops have been tossed aside by many, as most tasks that were traditionally done on a computer are now performed on tablets. Now with Microsoft Office 365 on an iPad, that trend is likely to increase over time.

At home, we often pick up a tablet from the table or from the sofa and start reading or streaming videos. At work, we are leaving our documents or notepad behind, attending meetings with only a tablet. Is there any relationship between the tablet we use and the mobile phone we own?

The recent Kantar Worldpanel ComTech report shows, by December 2013, amongst Apple, Samsung and Lenovo tablet users in Urban China, over 62% own a smartphone device. 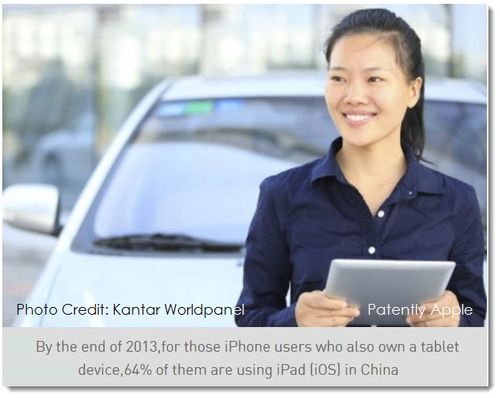 This ratio is particularly high for Apple iPad users at 80.9%, followed by Samsung with 56.9%, which is slightly higher than Lenovo's 42.6%.

Therefore, in comparison, iPad users are more likely to use a Smartphone device, and tablet penetration is higher for iPhone users. This implies the high cost of Apple products naturally recruits high value customers and they are more likely to lead the trend of multi-screen adoption.

With Apple, Samsung and Lenovo all offering mobile and tablet products, their cross-product penetrations have a close tie with Operating Systems (OS) like Android and iOS that are used in their devices.

In the recent Kantar Worldpanel ComTech report, by the end of 2013, for those iPhone users who also own a tablet device, 64% of them are using iPad (iOS).

Regardless of whether it is Android or iOS, users are likely to choose a tablet that runs the same OS to their mobile phone. However, the study notes that this trend is particularly good news for Apple, as it can upsell and retain users' business once those customers have been exposed to iOS, whereas for Samsung, when competing against so many other Android tablet manufactures, Android mobile users are spoiled for choice for tablets that run on Android. Hence, Samsung tablet penetration is just 10% among those Samsung mobile users who currently own a tablet.

As a result, for mobile brands, especially for those manufacturing Android devices, to stand out in the competition, they will need a unique eco-system that can deliver better user experience.

That latter point made by Kantar was the very point made by developers during yesterday's Microsoft Build Developer Conference. They want to provide their customers with a more consistent user experience across their many devices. Microsoft's new CEO Satya Nadella said they were trying to get to the point as quickly as possible. But it's Apple who delivers that for their developers and end users, today. That's why the stats are in Apple's favor on this very point.

Kantar notes in their study that "This eco-system could be a brand new operating system, or a variation of Android in conjunction with connecting mobile application, but it needs to run on all types of device. This approach will not only attract/retain consumers to mobile phone product lines, but also encourage consumers to purchase other smart devices in the same eco-system."

This is a common drum that Kantar beats. They continually pound the table telling Android OEM's to just be more like Apple. We covered Kantar's last report where they acknowledged that Apple was the best value proposition of any brand in the industry. It's becoming a habit with them.

For now, Apple racks up another tiny victory. Once again, Apple users lead the way in multi-screen adoption, even in urban China – one of the most important mobile device markets in the world.