A new report today reveals that Google's future Android smartphone that will come equipped with a high-end 3D Motion camera that's part of Google's Project Tango will accomplish its wonders using technology from PrimeSense, a company acquired by Apple; A company who possesses many 3D related patents.

The discovery of a PrimeSense chip being used in Google's 3D motion camera was first made by iFixit in a typical teardown of theirs as noted below in-part. They specifically noted that "This appears to be PrimeSense's new Capri PS1200 SoC 3D imaging chip." 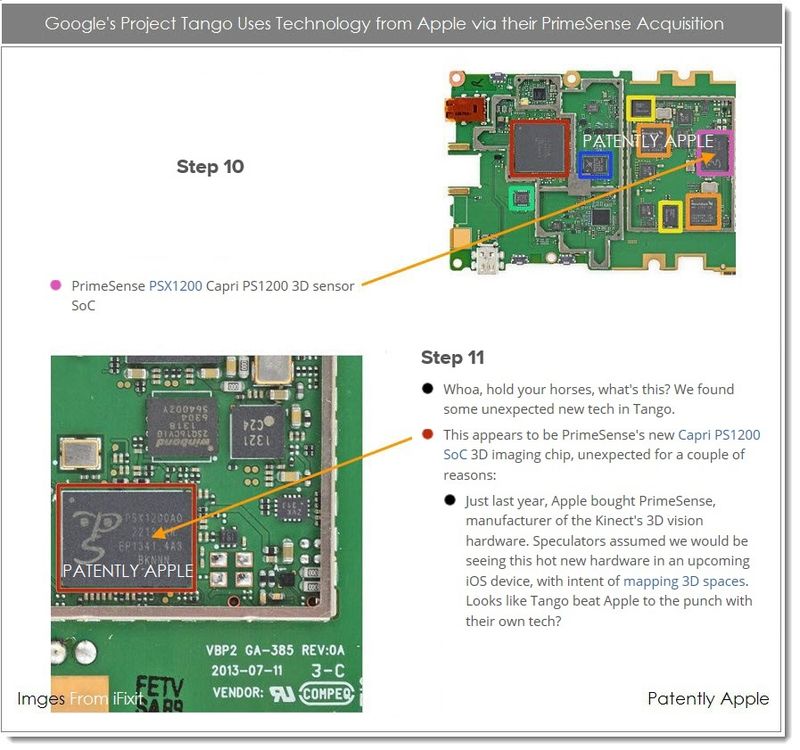 Whether Project Tango will be a Google exclusive or shared with other Android OEM's is unknown at this time.

Hopefully we'll soon be seeing what Apple has in store with PrimeSense's technology. Will it be for Apple TV, Apple's high-end iDevices or both? Only time will tell. For now, unless Google delays their project and uses another technology, each Android phone using PrimeSense technology will be putting money in Apple's pocket: Ka-ching! Hmm, let's think: How about $40 per phone (ha!).

About Making Comments on our Site: Patently Apple reserves the right to post, dismiss or edit any comments. Comments are reviewed daily from 4am to 7pm PST and sporadically over the weekend. First cited by MacRumors