Home Archives Contact Us Subscribe Twitter MeWe Facebook Patently Mobile
Samsung's AP Business Fell off a Cliff in Q4 Thanks to Apple
New Stunning Maps of the US, Canada & Other Countries Show Apple is winning against Android in Larger Cities

Apple's iPhone is King of Manhattan as Shown in Stunning Map 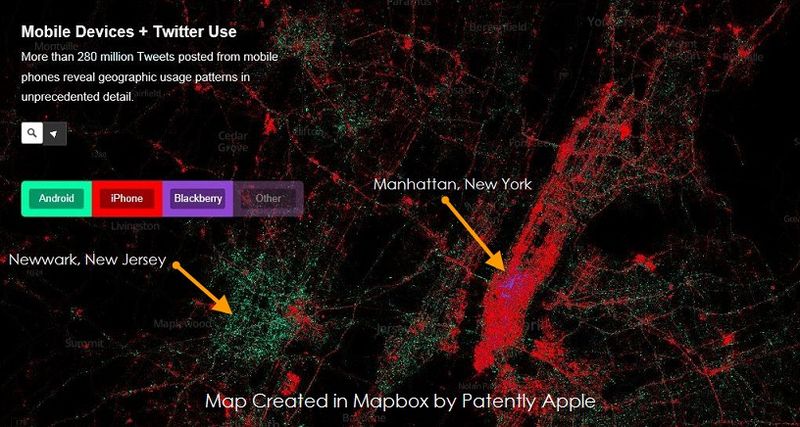 They say that a photo is worth a thousand words. This is a clear example proving that out. The map illustrated in our cover graphic was created by Mapbox. It clearly shows us just how hot the iPhone really is in the richest part of New York: Manhattan. The iPhone is king in Manhattan in stark contrast to Newark, New Jersey where incomes are substantially less. It's an established fact that Apple's iPhone is adopted by more in the higher-end of the market, but this classic map gives visual life to those stats.

If you live in the New York metro area, you don't need to be told that Manhattan is where the region's rich people live, and the poor live in Newark. Manhattan's median income is $67,000 a year. Newark's is $17,000, according to U.S. Census data.

The rich, it seems, use iPhones while the poor tweet from Androids.

A Socio-Economic Split on Class lines favors the iPhone

According to Business Insider, Android users are less lucrative than iPhone users, and designers are iPhone users. It's a socio-economic split on class lines, in favor of iPhone over Android.

Mobile traffic data to e-commerce sites bears this out. Every quarter, a mobile market research company called Monetate publishes data on mobile shoppers and how much they spend online. On almost every metric, Apple users come out ahead as spenders. Here's the data for Q4 2013:

Only on phones do Android users spend a little more.

Business Insider interestingly notes that "if you look at the dominant share of iPad as a shopping device and how much iPad users spend — $155 on 87% of visits — it's almost as if Apple users do their shopping on iPad and only use their phones for the loose-change stuff. 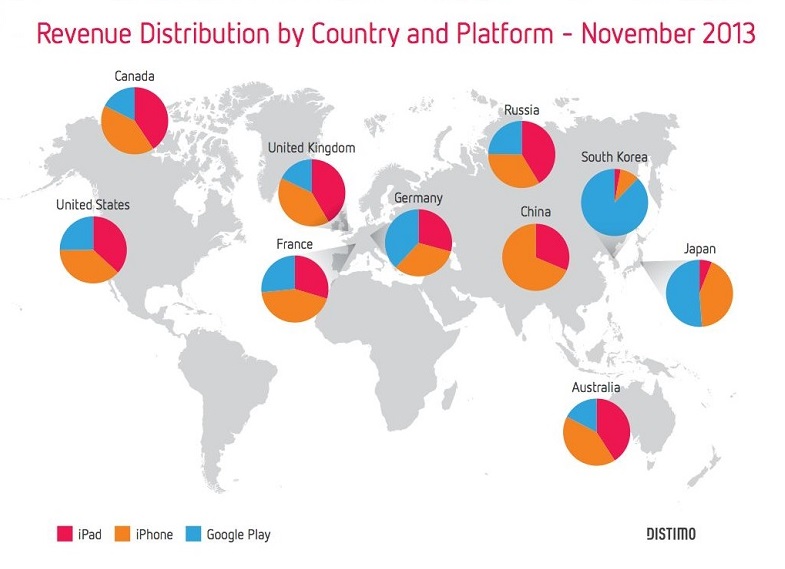 Business Insider also illustrates an interesting graphic from DISTIMO. However, it's an odd map comparing Google's Google Play online store to Apple's iPad and iPhone devices. In 2013 we posted a report titled "Apple's App Store Crushing Google Play in Revenue," which gives some texture to this conversation. For more on this story see Business Insider's report.

About Making Comments on our Site: Patently Apple reserves the right to post, dismiss or edit any comments. Source: Graphic created from using Mapbox