Home Archives Contact Us Subscribe Twitter MeWe Facebook Patently Mobile
Samsung's Big Strategic Point at Trial about Apple Declaring a Holy War on Google Fizzles under Scrutiny
Apple Sued Samsung in the US, yet a Euro Patent Expert Continues to Argue the Patent Case in Terms of Euro Standards

According to Patent Harbor's court filing, Apple has allegedly infringed upon their acquired 1997 US patent number 5,684,514 entitled "Apparatus and method for assembling content addressable video."

At the heart of their case they state that "Upon information and belief, Apple manufactures, uses, sells, offers to sell and/or distributes computers, including, but not limited to, the MacBook Air, MacBook Pro, iMac, Mac Pro and Mac mini (collectively "Apple Computers"), and its iMovie application. The iMovie application allows a user of the computer to take pre-recorded video and create a title or chapter list (similar to the scene selection menu provided on a commercial DVD/BD disc), where the title or chapter menu has a description (pictorial or written) of the video that will be accessed if the viewing user selects a particular title or chapter from the scene selection menu.

The Apple Computers with the iMovie software infringe claim 1 of the '514 Patent. 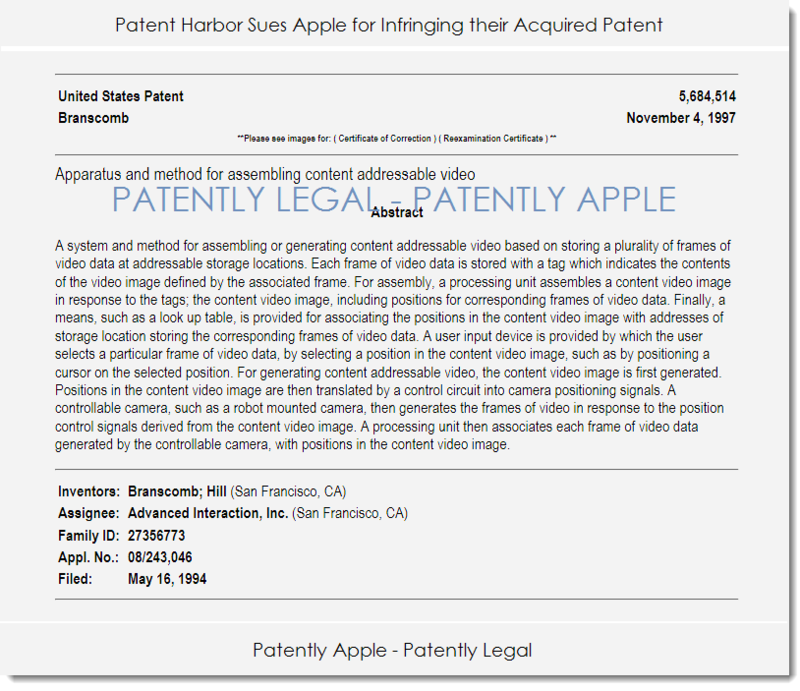 Further, Patent Harbor notes that they're in compliance with the requirements of 35 U.S.C. § 287, and is entitled to past damages. According to the filing, Harbor notes that "From the date of six years before this suit was filed up to April 4, 2008, there were no authorized sales of commercial products embodying the claims of the '514 Patent. As of April 4, 2008, there was a licensee, but that licensee had an obligation to mark. As of May 3, 2011, Patent Harbor entered into a license with a third party that sold DVD Recorders that Patent Harbor accused of infringing claim 1 of the '514 Patent, and that license did not contain an obligation to mark accused products with the '514 Patent number."