Apple's iBeacon Wins Big in ANKAmall in Turkey Thanks to Boni

On the fifth of April Apple opened their doors to their latest flagship Apple Store in Istanbul, Turkey with the typical opening door hoopla that's common around the globe. The day before the store opened we illustrated a twitter traffic map generated by iPhone users in Istanbul that was quite substantial. Today, the new gets better. Patently Apple was just contacted by a Turkish Company who has just completed one of the largest single day iBeacon deployments at Istanbul's ANKAmall. Boni advised us that they're planning to deploy more iBeacon systems in other shopping malls. In fact they're already working on new projects this year that could rack up another 4,000 iBeacons. While the technology will work with iPhones and Android phones, it's just a fact that more iPhone users in Turkey will be able to take advantage of this this new service immediately.

According to Boni, their new free program called "Walk&Win" is available to those in Istanbul today at Apple's App Store or Google Play. ANKAmall stated that Boni's "Walk&Win" application works harmoniously with Apple's Standard iBeacons in all of their 320 stores. 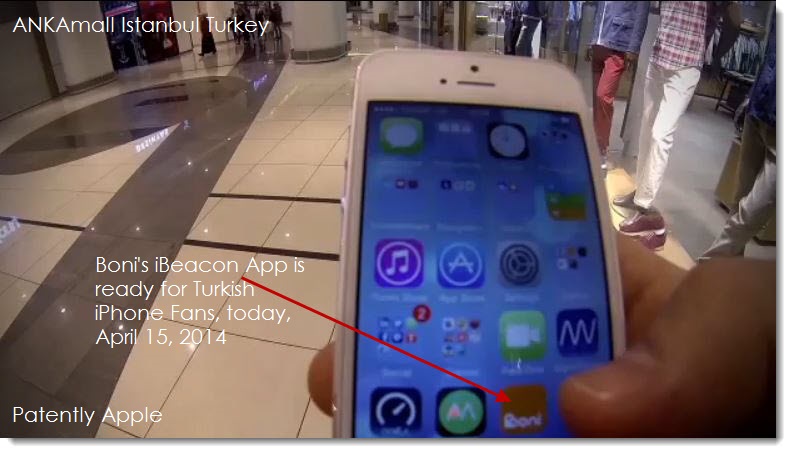 Boni indicated that they started working with 35% of the retailers in their reach. They are expecting more participation from retailers in relation to large coverage area of ANKAmall and stronger engagement provided by the beacons.

All of Boni's testing was done on Apple MacBook Pros.