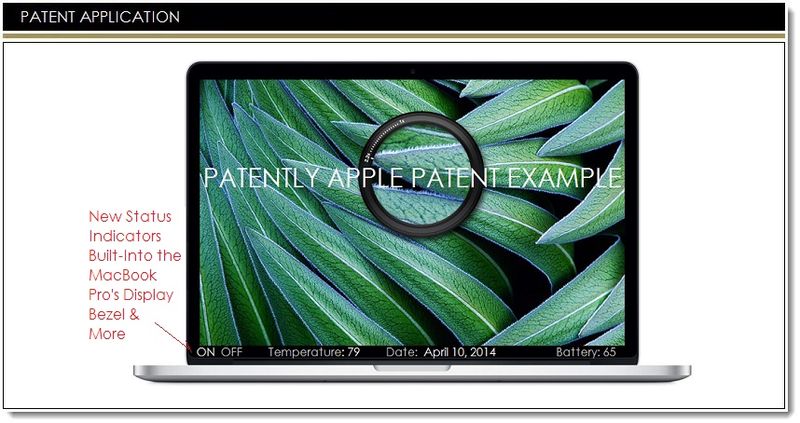 Late yesterday Patently Apple discovered a unique patent application from Apple that was published in Europe. The patent contains a feast of cool new ideas floating around Cupertino's R&D labs. Apple's many inventions are illustrated on both MacBooks and a possible future iPen. Apple discusses varying flex display designs and a new illumination process that is very cool. Some of the features described in this latest patent filing could easily be applied to future wearable devices from Apple. All-in-all Apple's European patent application was a lot of fun to explore and I think that you'll really enjoy our report covering its many highlights.

Cost and complexity are also concerns when using conventional arrangements for presenting a user with information such as operating status information. It would therefore be desirable to be able to provide improved techniques for displaying information to a user of electronic equipment.

Apple Invents Status Indicators for an iPen and/or Other Devices

Electronic equipment such as an iPad, a future iPen, Macs or other electronic devices may be provided with new kinds of status indicators. A status indicator may be formed from a layer of liquid crystal material interposed between a pair of polarizers.

Electrode structures may be used to apply electric fields to the liquid crystal material to place the status indicator in an opaque state or a transparent state. The electrode structures may be formed from layers of transparent conductive material such as indium tin oxide layers. The indium tin oxide layers may be formed as coatings on transparent substrate layers such as glass layer in the status indicator.

A colored structure or other structure may be placed under the liquid crystal material, polarizers, and electrodes to allow the status indicator to change between a dark state and a colored state.

The status indicator may be provided in the shape of a ring that extends around the perimeter of a cylindrical stylus. The stylus may be used as an input device when a user is interacting with a tablet computer or other device with touch input circuitry. Multiple status indicators may be grouped in a cluster to serve as an analog gauge. 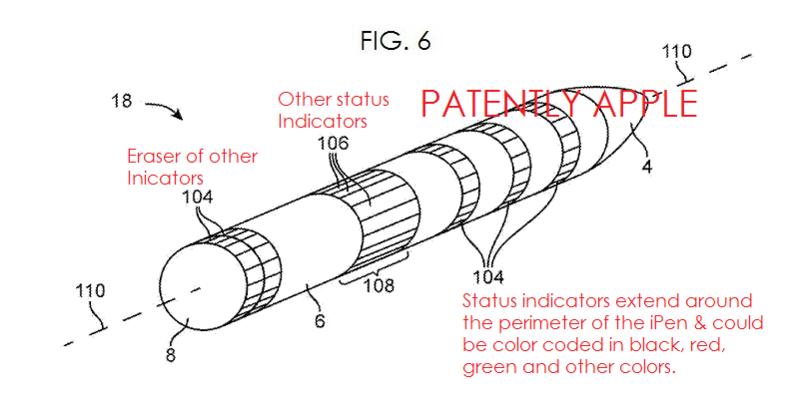 According to Apple, the rings could also be used in connection with a graphics program. There may even be a way to tap on the indicators to change the status of the iPen for drawing different line widths, drawing in different colors or calling up the eraser.

Buttons may be illuminated using internal light sources. A status indicator may be aligned with a button so that the appearance of the button can be adjusted to reflect sleep state status or other operating status for an electronic device.

Status indicators may be formed under transparent windows such as logo-shaped windows. 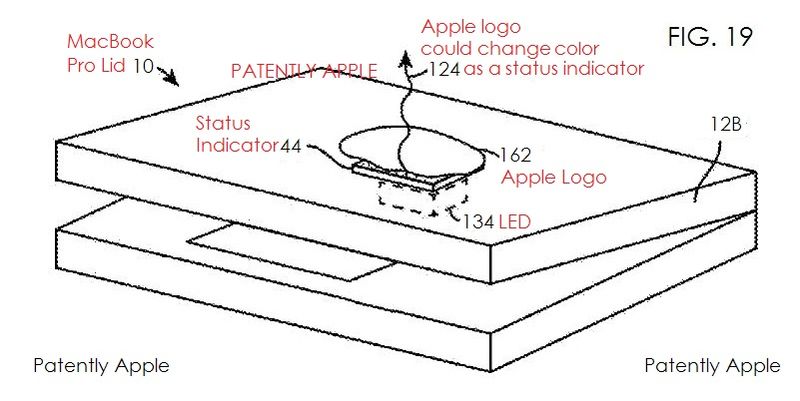 Apple also notes that the light could change color depending on what the status indicator is to communicate. Apple also notes that the logo indicator light could be set to flash depending on a particular status. Apple really never expands on what the indicator lights could be set to. But imagine if the Apple logo indicators could flash red for an emergency message from home and/or work. It would certainly get your attention if you're close to your MacBook Pro and/or walking into a room. It would instantly flag you that something is wrong.

Overview of the System

In Apple's patent FIG. 1 noted below we're able to see a brief overview of Apple's proposed system that could be used with many devices including an iPad and stylus. Apple notes that although the focus of the patent illustrations are on a next-gen stylus working with an iPad, the door is wide open for the pen to work with an iPhone, iPod, wrist watch, pendant or other wearable computer, gaming equipment, notebooks, desktops, TVs and computer monitors that incorporate touch sensitive regions.

In some cases the indicator system for the noted devices won't need a stylus as noted with the MacBook Pro example below. Status Indicators could include Touch Sensitive Regions on a Device 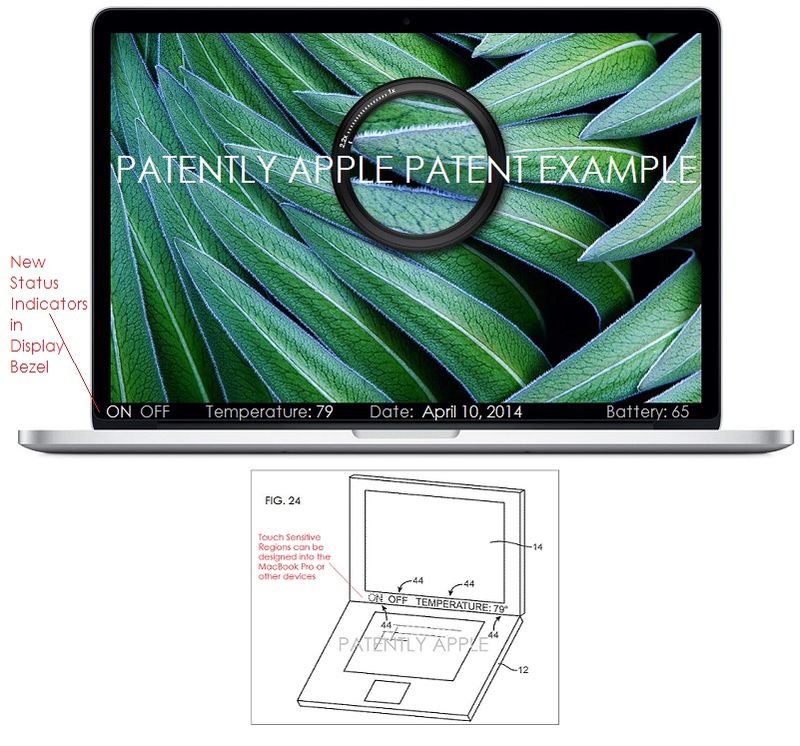 Apple's patent FIG. 24 noted above is a perspective view of a MacBook Pro that has been provided with liquid crystal status indicators built into the display bezel to show on/off status and other indicators showing temperature, date, battery life and more. Yet it's not just about "showing" you the status. The key here is that it means that the bezel can be designed to be touch sensitive so that you'll be able to interact with whatever status indicators that Apple is contemplating.

Elsewhere you get the impression that the bezel area on the MacBook could be used as a straight crawl line area for news or stock prices. Once again keep in mind that this feature could also apply to a wide variety of Hardware from an HDTV through to a wrist watch.

One of the cool things about the new status indicator system is that in some instances Apple states that it could use a material such as liquid crystal droplets. The droplets can be interspersed amount polymer droplets. Each droplet may have a diameter of about 1-10 microns. A voltage may then be applied to the liquid crystal droplets using transparent electrodes such as upper and lower indium tin oxide electrodes that are illustrated below as patent point numbers 250 and 252. 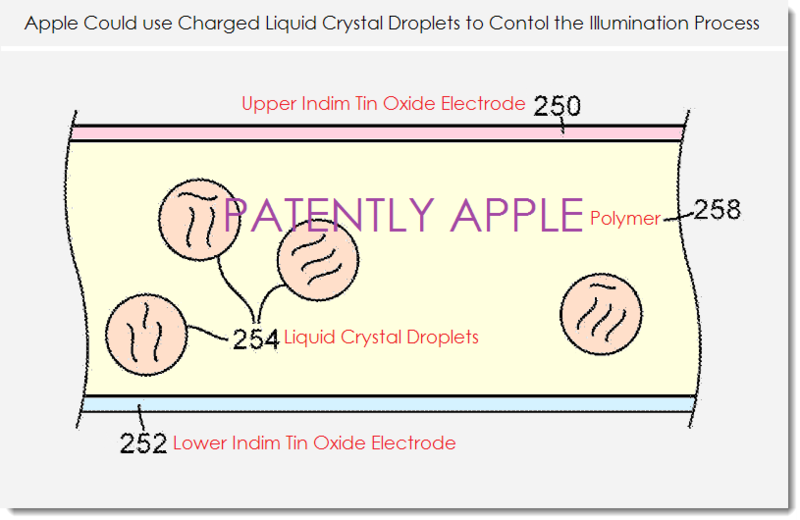 According to Apple's patent application, "The voltage rotates the liquid crystals to adjust the index of refraction of each of the droplets and thereby adjusting the difference in index of refraction between the droplets and polymer. As the voltage across the terminals (#250 top and #252 below) is adjusted, the transparency of the status indicator structures (noted as #44 in the MacBook example above) can vary from opaque to clear.

Further into the patent application Apple briefly touches on an indicator that will have the "appearance of side-to-side movement," and "visual effects" very much like CNN or CNBC's crawl lines showing news or stock prices. That would be cool to have on a Mac and perhaps an iPad, TV or even a wrist-band styled iWatch. The method of using charged liquid crystal droplets apply here as well. 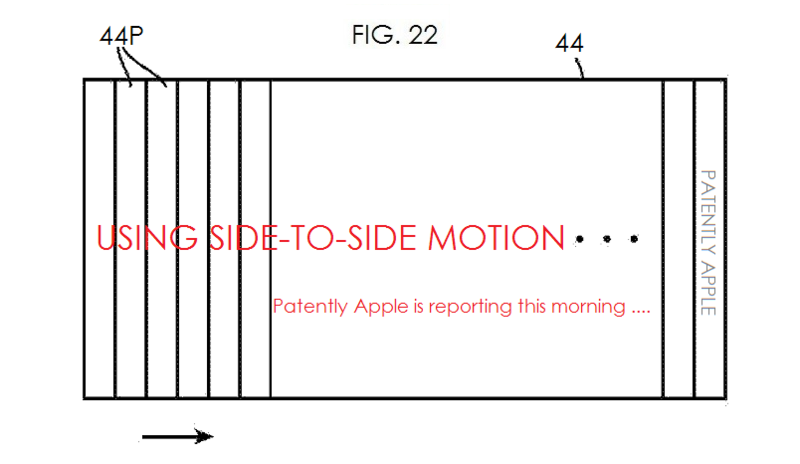 Apple further notes that they could also us a vertical blind type of status lighting effect. Apple discussing patent FIG. 22 as noted above states that "Individually controllable status indicator portions 44P may be arranged so as to cover the entire area of status indicator 44. In the example, portions 44P have the shape of vertically extending strips.    Individually controlled liquid crystal elements such as structures 44P may be formed using other shapes, if desired."

In Apple's patent FIG. 9 we're able to see a wrap-around flexible display that is presented as a display for a possible future iPen. This perspective is a top view of the pen which was illustrated above in FIG. 8. 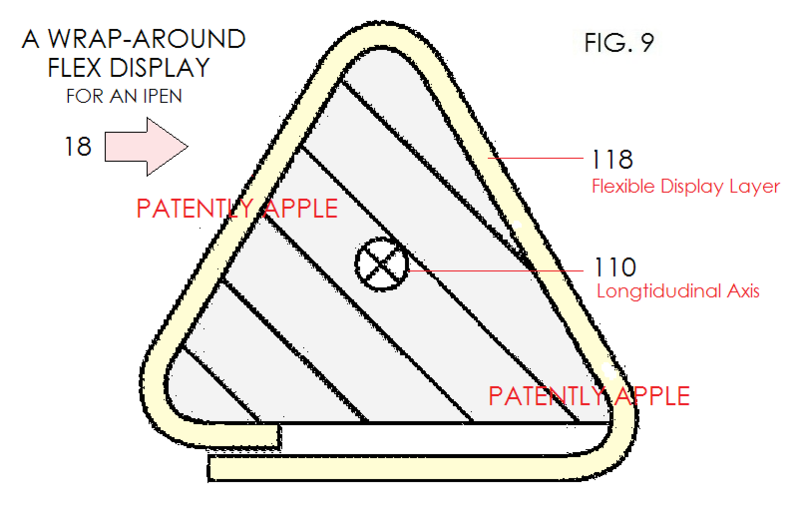 Apple states that the display may use OLED, electrophoretic or electrowetting display technology. On Tuesday there was related news from DigiTimes that Flexium Interconnect had delivered flexible PCB board samples to Apple regarding a future wearable device.

Other interesting tid bits found in this patent application included an alternative ring-styled flexible display and the use of glass buttons that double as illuminated status indicators in different colors. Although the single glass button is shown with an iPhone or iPod like embodiment, the button(s) could be used in other future devices be it an HDTV, a handheld or wearable computer and beyond. 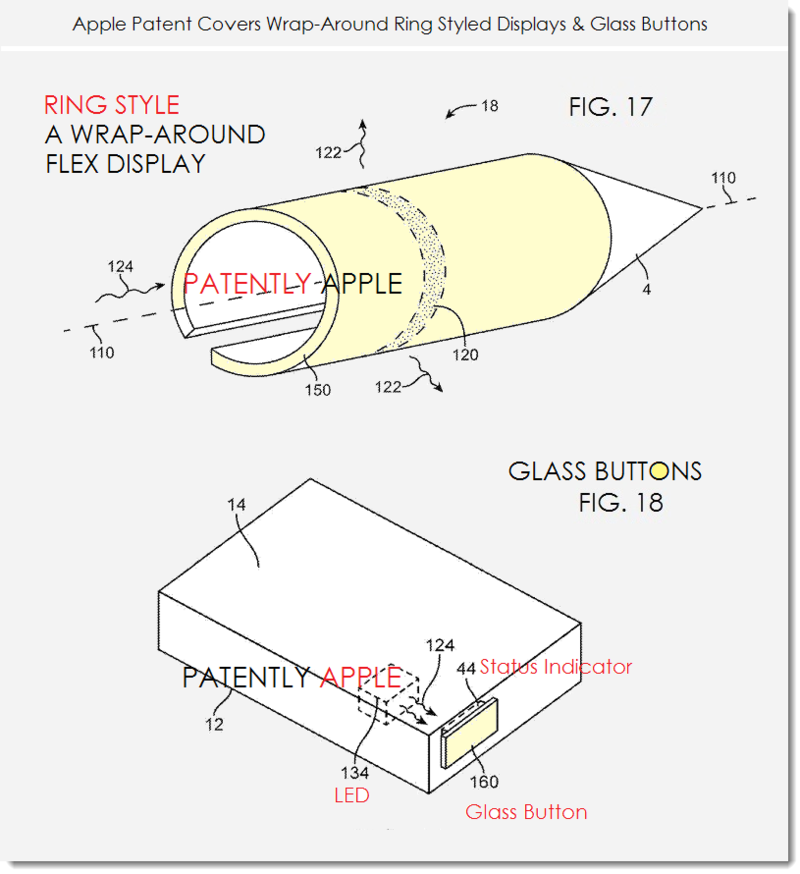 Apple's patent application was published earlier this week in Europe and originally filed in Q3 2013. Considering that this is a patent application, the timing of such a product or features to market is unknown at this time.