Apple Granted a Surprising Patent for an iWatch-Like Device

The US Patent and Trademark Office officially published a series of 45 newly granted patents for Apple Inc. today. In this particular report we cover a single granted patent that surprisingly relates to an iWatch-like device form factor.

Apple has been granted a patent today for their invention relating to electronic device assemblies. Apple's patent application was concealed from the public and this is the first time that we're seeing this invention.

Apple states that the electronic device that they illustrate may be a laptop computer, a tablet computer, a somewhat smaller device such as a wrist-watch device, pendant device, headphone device, earpiece device, or other wearable or miniature device, a cellular telephone, or a media player. As generic as that description is, the fact remains that Apple is not only illustrating a new form factor, they're describing all-new components to support a new device form factor that looks like an iWatch-like device. 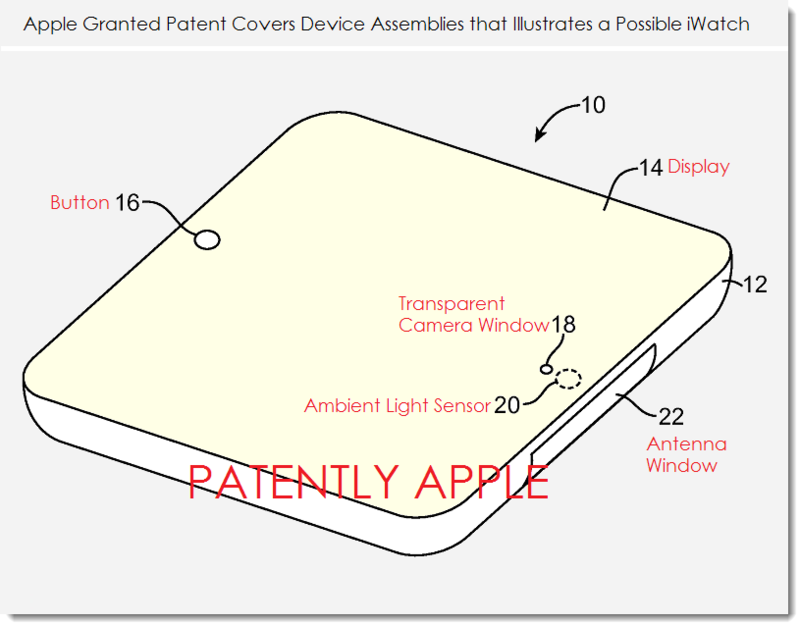 In Apple's patent FIG. 14 below we're able to see a perspective view of an illustrative camera window having associated grooved camera window trim structures in accordance with an embodiment of the present invention.

In Apple's patent FIG. 4 below we're able to see a flexible printed circuit 38 may be wrapped around support structure 40 so that conductive foam 36B presses against antenna ground 36A. The support structure may be formed from injection molded plastic or other dielectric material.

In Apple's patent FIG. 20 below we're able to see an exploded perspective view of a system in which a flexible printed circuit cable that has been folded has been provided with a retention band to form a service loop. 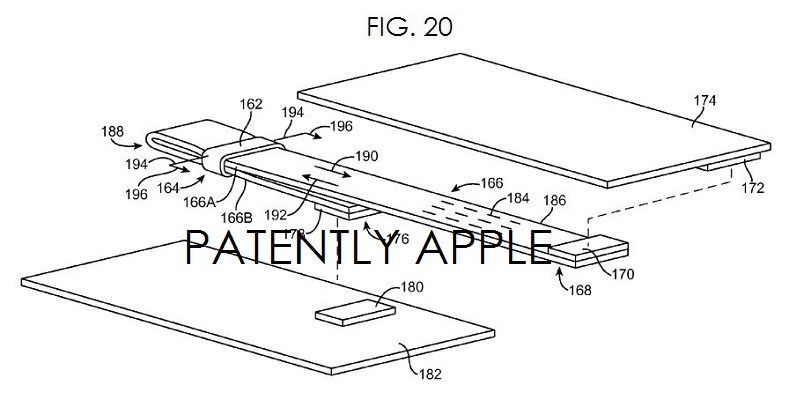 Apple credits product designer Conor Lenahan who was a mechanical engineering intern at iRobot along with team mates Kevin Gibbs, Carl Peterson, Erik Uttermann, John Ternus, Justin Wodrich, Elvis Kibiti and Dereck Wright as the inventors of granted patent 8,712,233 which was originally filed in Q1 2012 and published today by the US Patent and Trademark Office. To review today's granted patent claims and details, see Apple's patent.

It should be noted that Apple has presented a "concept" design for the sake of this patent. This is not a design patent – therefore the design could dramatically differ once it comes to market.