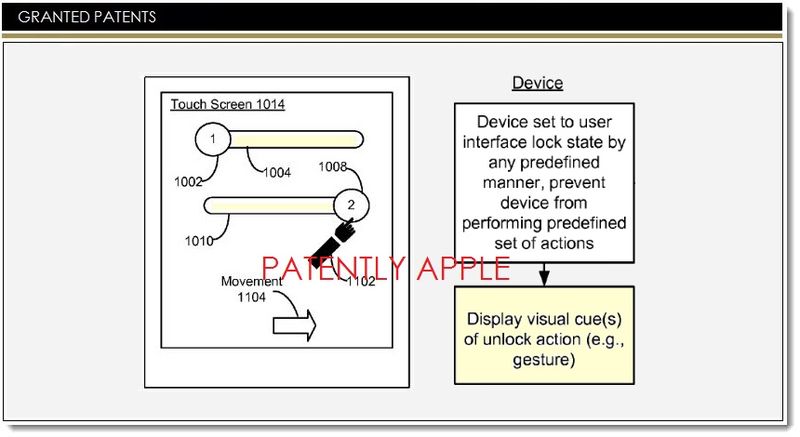 The US Patent and Trademark Office officially published a series of 46 newly granted patents for Apple Inc. today. In this particular report we cover Apple's patent relating to a possible future Push-to-Talk iPhone and/or iDevice feature. We also cover a more advanced version of Apple's famed Slide-to-Unlock and two patents relating to avatar creation and editing for social networking, video conferencing and gaming. We wrap up this week's granted patent report with our traditional listing of the remaining granted patents that were issued to Apple today.

Apple has been granted a patent today by the US Patent Office for their invention relating to their famed slide-to-unlock feature. This relates to one of the patents that Apple is charging Samsung of infringing in their current trial, though it's not the actual patent in the case. Apple's first patent claim for this current granted patent is noted below: This patent covers more aspects of the slide-to-unlock method and introduces a more sophisticated version that may be used in the future. However, with Touch ID now in use on the iPhone 5S and future iPhones, this dual slider method may not be implemented.

On March 26 we posted a report titled "On the Eve of the new Apple-Samsung Trial, Apple reveals some of the iPhone's History." The report was about Greg Christie, noted as one of the inventors of this patent, discussing how the iPhone with its revolutionary user interface came about and how it all started under Project Purple.

In this current case, Apple claims Samsung infringed on five more of its patents, including the "slide to unlock" feature for which Mr. Christie is listed as an inventor (of the original slide-to-unlock patent). Samsung bitterly complained about Christie's interview prior to the trial as noted below.

Avatars Reflecting user States: Apple states that their invention is about methods, systems, and computer-readable media for creating and using customized avatar instances to reflect current user states are disclosed. In various implementations, the user states can be defined using trigger events based on user-entered textual data, emoticons, or states of the device being used. For each user state, a customized avatar instance having a facial expression, body language, accessories, clothing items, and/or a presentation scheme reflective of the user state can be generated. When one or more trigger events indicating occurrence of a particular user state are detected on the device, the avatar presented on the device is updated with the customized avatar instance associated with the particular user state. 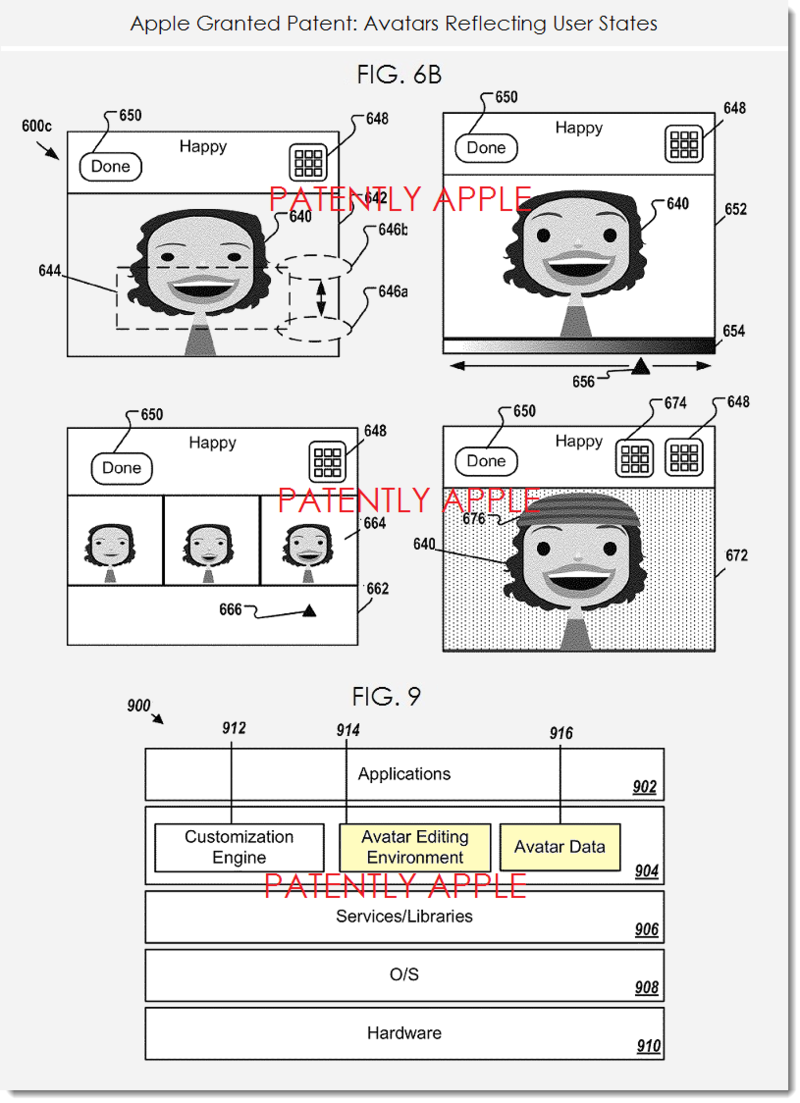 Automatic Avatar Creation: Apple states that "A three-dimensional ("3D") avatar can be automatically created that resembles the physical appearance of an individual captured in one or more input images or video frames. The avatar can be further customized by the individual in an editing environment and used in various applications, including but not limited to gaming, social networking and video conferencing. 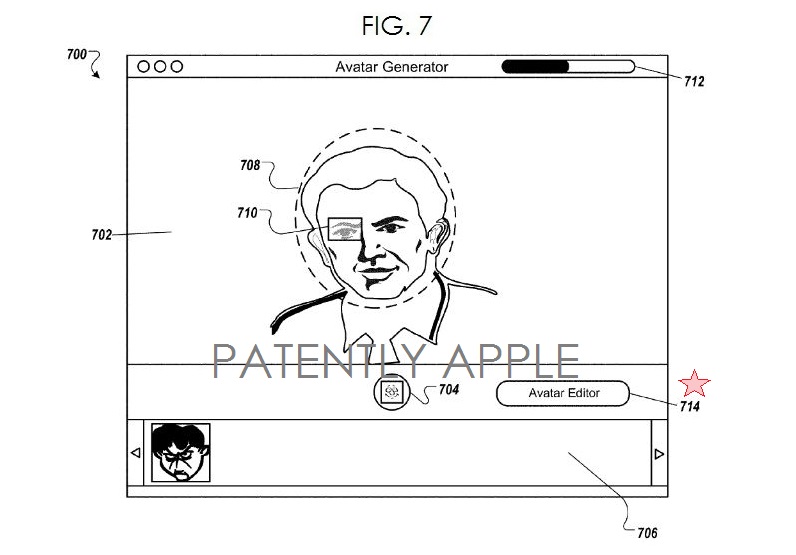 Apple began researching avatars back in 2009 covering head track technology related to avatars. Three or more avatar related patents popped up in 2011, with one connected to "Personalized Shopping Avatars." In 2012 Apple stepped up their work on avatars with two interesting inventions related to an app for 3D Avatar creations that could be used for games. At the moment, the latter two avatar projects appear to be the closest to being finalized than the others.

In general, Push to Talk over Cellular (PoC) is a service option for a cellular phone network that enables subscribers to use their phones as walkie-talkies with unlimited range. A typical Push-to-Talk connection connects almost instantly. A significant advantage of PoC / PTT is the ability for a single person to reach an active talk group with a single button press; users need not make several telephone calls to coordinate with a group.

Apple has been granted a patent today for their invention relating to a system and method for Push-to-talk (PTT) service to another user via a wireless packet data network. To this end, in one embodiment the system includes a packet data network with at least one mobile station, a radio access network, a database server, a registrar and location server, an Interactive Multimedia Server (IMS), and a PTT server that provides the PTT service to other PTT users on the packet network. 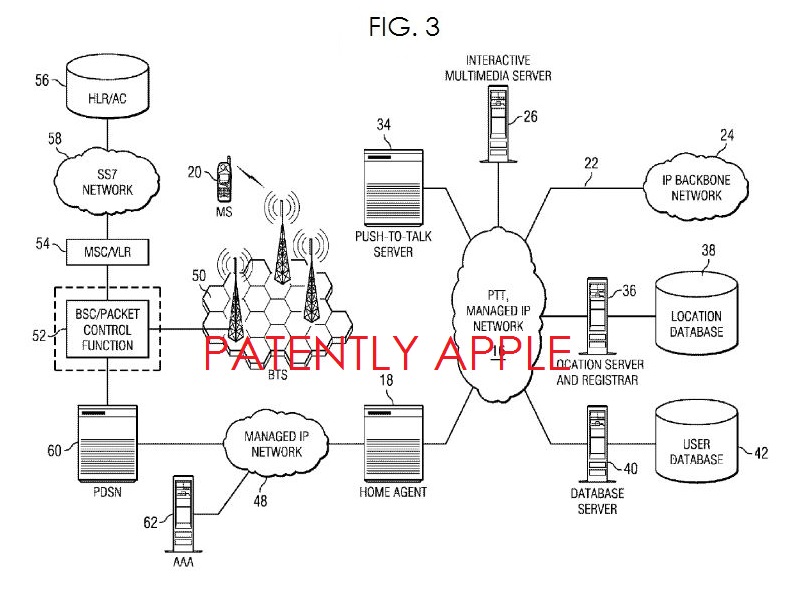 Apple credits Robert Denman, Sriram Parameswar and Barbara Derryberry as the inventors of granted patent 8,694,041which was originally filed in Q2 2013 and published today by the US Patent and Trademark Office. The patent covers 20 patent claims.

Although it's likely to never happen, you have to wonder if this could be added to an iPad with Wi-Fi + Cellular. Today the cellular is used for data only on an iPad. But adding a Push-to-Talk option would be a rather original and unique feature without it being a full blown phone. It's not part of the invention, but it wouldn't be a stretch or impossibility. On the other hand, I won't be holding my breath waiting for this feature to ever emerge, even though it would be rather cool to have. 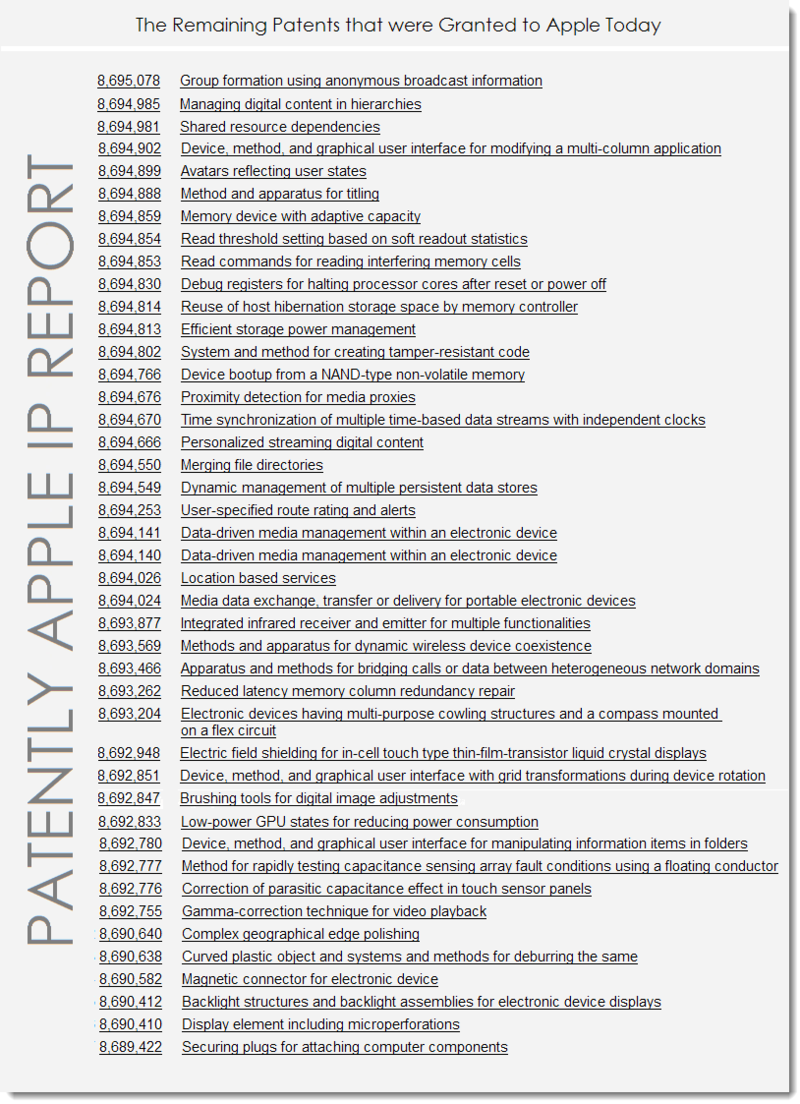