Through our ongoing IP research, we discovered late last week that Samsung is once again in a race to deliver a workaround to Apple's pinch-to-zoom patent which has been a thorn in their side in their ongoing patent infringement case with Apple. Even though the US Patent Office has initially invalidated Apple's Pinch-to-Zoom Patent, Apple has the appeals process on their side and Judge Koh pointed that out in her rejection of Samsung's motion last year. Contrary to Samsung's claim that the patent had been "finally rejected" by the USPTO, Judge Koh noted that Apple had numerous options remaining. It can file a response to advisory opinion that the patent is invalid, then file an appeal with the Patent Trial and Appeal Board, or PTAB, and then appeal the board's decision to the Federal Circuit. In October another Apple patent that was supposedly invalidated was reconfirmed by the U.S. Patent Office. Samsung has been fighting this patent tooth and nail all the while racing to invent a workaround. Thursday a second workaround was revealed.

Samsung has been fighting Apple tooth and nail on their Pinch-to-Zoom patent because it's so crucial to multitouch devices. All the while, it's been nothing more than a failed stalling tactic so that they could find a workaround to this very important touch device gesture.

Now that Judge Koh ruled against them confirming that they infringed on Apple's intellectual property, Samsung is determined to introduce a workaround and this latest patent application of theirs shows that they now have a solid replacement that works for them for both finger-touch and digital-pen actions. The new gesture would be common to both finger and pen.

Samsung's patent points to the old way of performing a pinch-to-zoom gesture in patent figures 1A and 1B.

Samsung's FIGS. 6A and 6B illustrate a process of zooming in a screen using a circular or oval gesture of a user.

Samsung's patent FIGS. 7A and 7B illustrate a process of zooming out a screen using a circular or oval gesture of a user. 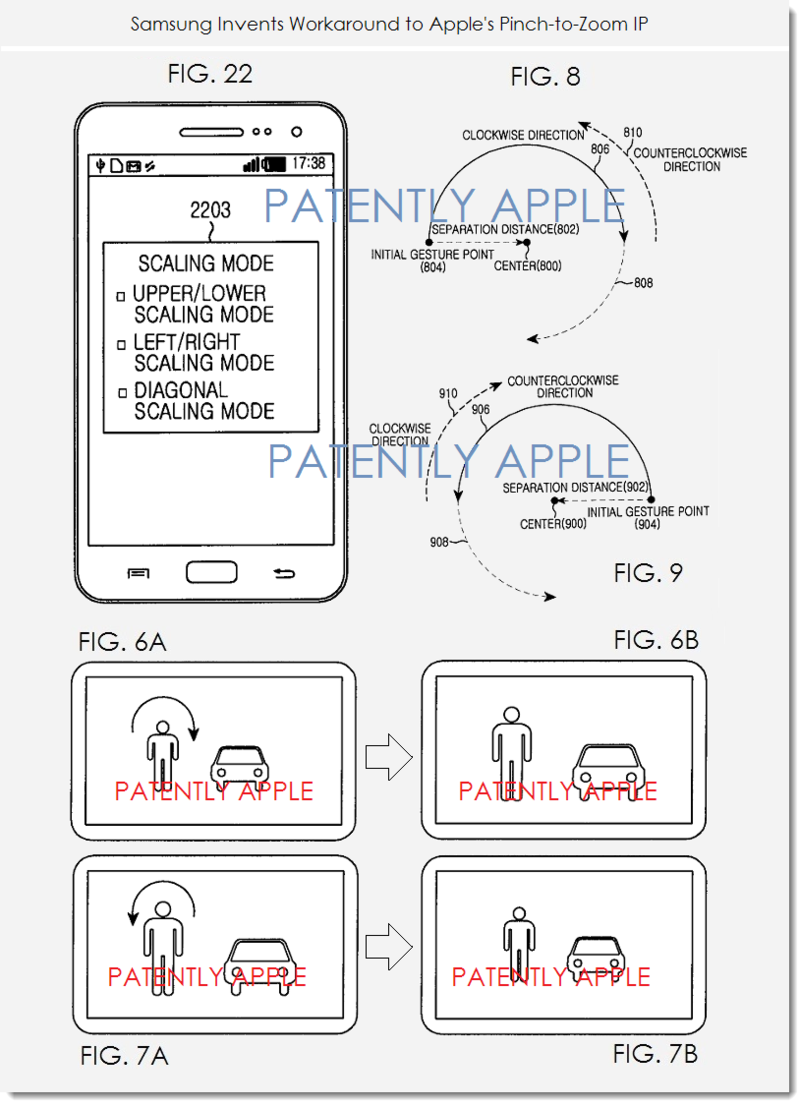 Samsung's patent which was published last week by the US Patent Office was originally filed in the US in August 2013.

About Posting Comments: Patent Bolt reserves the right to post, dismiss or edit any comments.