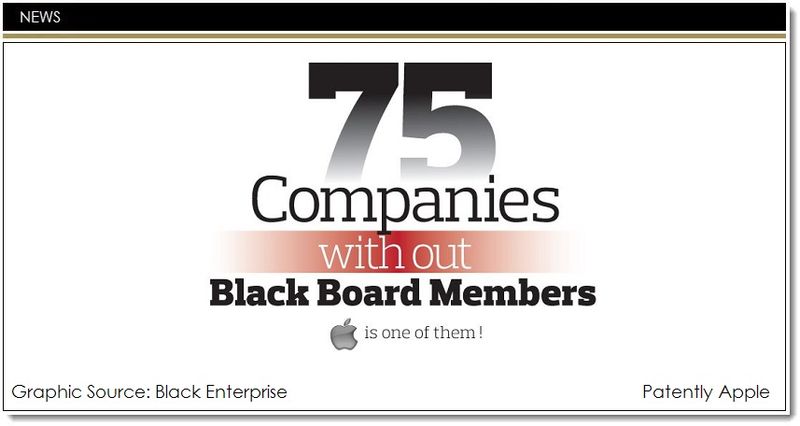 Writing to Apple, Twitter, Facebook, Hewlett Packard, Google and other iconic Silicon Valley technology companies, Rev. Jackson said, "Technology is supposed to be about inclusion, but sadly, patterns of exclusion remains the order of the day. Rev. Jackson met with Apple and others yesterday in East Palo Alto to address the fact that leading tech companies are not including enough blacks on their Board of Directors.

Whites made up 86.7% of total board seats, and women and minorities lost ground in America's corporate boardrooms between 2004 and 2010 Apple did not include any minority firms in its last 6 debt offerings; including its latest $17Billion debt offering.

In January, Apple directors altered the charter of the Nominating and Corporate Governance committee to include language committing to the diversity of their Board of Directors.

Today, the online website called Black Enterprise wrote about "75 Companies without Black Board Members." Here's another excerpt from that report:

"Have you ever searched Google, stood in line to purchase the latest iPhone, bought products on Amazon.com or bought plane tickets through Priceline.com? Have you shopped at the Gap, Banana Republic, or Old Navy or made purchases at CVS using your Visa or MasterCard? Do you plan to watch the Sunday football game on Fox Sports?

Well, none of these companies value your consumer dollars enough to have African Americans sit on their board of directors. The browning of America hasn't extended into the boardrooms of some of America's largest publicly traded corporations—a number that benefit from black consumers to gain market share."

About Making Comments on our Site: Patently Apple reserves the right to post, dismiss or edit any comments. Source