A Japanese company by the name of Oji has developed the fabrication technology of patterned sapphire substrates (PSS) for LEDs which improves the performance of front luminance of LEDs by more than double compared to that of LEDs with non-structured sapphire substrate, by applying the technique of precise coating with fine particles. The technology will come to market in 2016. Some of the applications for this material include LED backlighting, a means of providing large displays with a way of increasing the number of colors it can display, car lighting, military applications and much more. Whether this technology will ever be used by Apple in future products is unknown at this time. However, the benefits of it just might catch Apple's R&D team's interest enough to get them to do a little more investigating into how this could apply to future sapphire applications that they may have in mind. 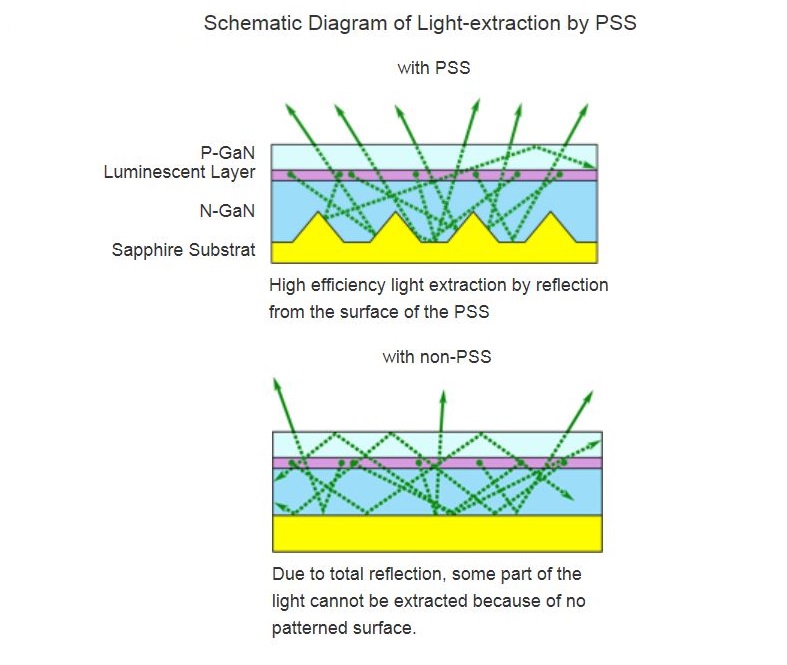 Oji developed the technology for mass production of the PSS by applying the technique of precise coating with fine particles. Delivery of customer samples of this PSS is planned to start in the near term.

The technology was showcased this past week at the LED Next Stage 2014 trade show in Japan. One of the exhibitions of this new technology showed how much brighter an OLED display would be with their sapphire based technology. They call this type of display a Plasmonic OLED as noted below.

Noted below is Oji's example comparison in LED brightness. The "ND (nano-dot array)-PSS" is used for the right light.

According to the company, an LED (luminous wavelength: 385nm) made by using such an ND-PSS had a 2.4 times higher brightness and a 1.8 times higher total luminous flux (in the front direction). Its luminous efficiency was not disclosed.

The reported noted that when Oji Holdings applied the new technology to the glass substrates of OLED devices, brightness in the front direction improved by about 100% with a red light-emitting device and by about 70% with a white light-emitting device. Furthermore, it realized a lower power consumption and a longer product life.

In a general PDF showing substrate and non-substrate applications for sapphire materials illustrated examples of it being used in the manufacturing process for LED backlighting, a means of applying it to larger displays covering a wider range of colors like an HDTV or computer displays and much more.

While we don't know what Apple's secret project is for the sapphire that they're now processing in their Arizona plant, there's good reason to believe that Apple could very well expand their expertise with sapphire to other types of projects over time.

Whether or not patterned nano-dot technology will be used in future iDevice display backlights is unknown at this time. Though as Apple's research teams continually try to advance and improve their beautiful Retina displays, this new technology could be of interest; especially in the area of energy efficiency. For now, it's just a technology to keep on our radar screen.

Some OLED News and Patents from Apple