It was reported on yesterday that Google executive Sundar Pichai told the South by Southwest conference Sunday that the company plans to release in two weeks a software development kit based on Android for makers of wearable devices, such as smartwatches. Google plans to release its own smartwatch, which will be manufactured by LG Electronics.

Smartwatches are among the first wearable computing devices, but Pichai said that Google hopes its software platform will help developers create many types of wearable devices. He threw out the possibility that one day, Google's software would be used in a "smart jacket" with sensors, reports the Wall Street Journal.

Last week Patently Apple discovered a Motorola patent application that was published by the U.S. Patent office. The patent which was found listed under Google patents, covers a wearable device that is clearly illustrated as a watch. The patent filing notes that "embodiments of the invention can provide a telephone keypad, for example, that is disposed along the strap of a wearable device, and that uses no electronics whatsoever. Since the strap is constantly flexing, the lack of electronic parts afforded by embodiments of the present invention is highly beneficial and results in enhanced reliability, usability, improved style, and more aesthetically pleasing form factors."

The design as noted below uses a strap based on an "air chamber" concept that could conform to the user's wrist. Moreover, the patent filing notes that "When the pliant material of the strap is stretched, such as may occur when the strap is stretched tightly about a user's wrist, this can be used to launch applications to monitor health conditions or to launch other applications. In one or more embodiments, these applications require the electronic device to have good contact with a user's skin."

In another area of the patent filing, it's noted that touching certain parts of the strap will be able to launch specific applications. 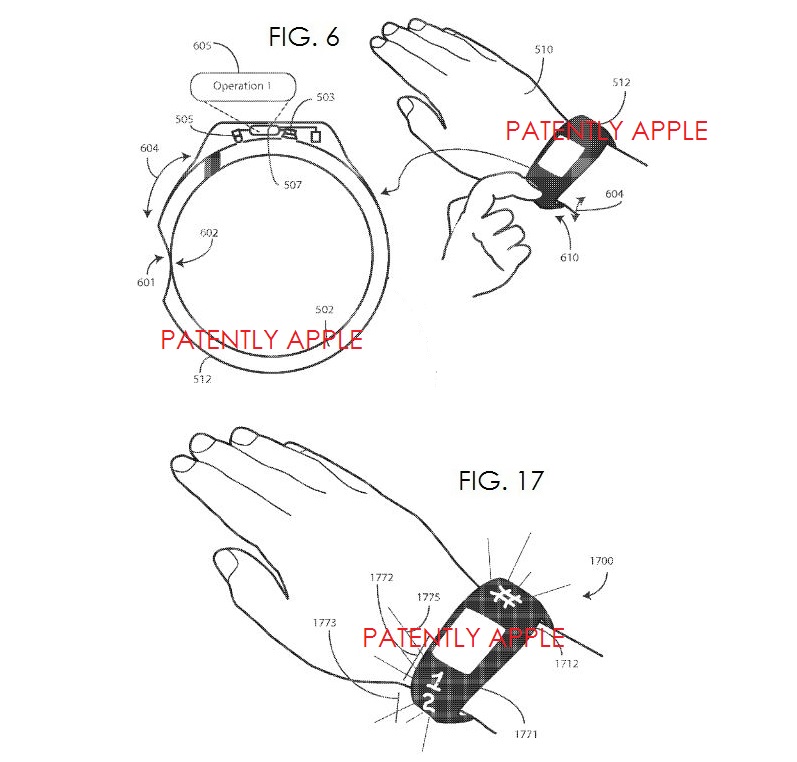 On the other hand, Google has been known to slap their branding on other OEM designs like their Nexus line. In this case we know that Google will be using LG to manufacture the watch and an LG patent for such came to light in early January.

CNET reporting from the Mobile World Congress trade show in Barcelona last month reported that "the actual smartwatch itself will make its debut at its Google I/O conference in June."

Recently Tim Cook told the Wall Street Journal that "Maintaining secrecy is important because talking about the future gives competitors a road map of Apple's plans and the company is 'getting ripped off left, right and sideways."

A case in point would be the whole smartwatch rage. The current explosion of interest in "smartwatches" was truly ignited by the revelation that Apple had a patent pending invention on record a little over a year ago. Thereafter rumors of every kind popped up all over the net for those jumping on board. If Apple is just thinking of something cool in a patent filing, the "fast followers," that we know as copycats, go into high gear – even if they don't understand where Apple is going with the concept. These companies know full well that they could simply play a word-game with the press that plays off of Apple's patent pending innovations and score easy PR points "sounding innovative."

So where does Apple stand on the coming wearables revolution? During Walt Mossberg's interview with Tim Cook at the D11 conference last year, he touched on the Nike FuelBand which he was wearing and said it was a great device focused on one thing.

"I would say that the ones that are doing more than one thing … there's nothing great out there that I've seen. There's nothing there to convince a kid that has never worn glasses or a band or a watch or whatever, to wear one. At least I haven't seen it. So I think that there are lots of things to solve in this space, but … it's an area where it's ripe for exploration; it's ripe for all of us to get exciting about. I think there'll be tons of companies playing in this." Cook added that "I see it as something that's another very key branch of the tree."

Further on, Cook noted what he felt was important in this space: "… you first have to convince people that it's so incredible that they want to wear it. Because where you two guys are wearing watches [Mossberg and Kara Swisher], if we had a room of full of 10 to 20 year olds and we said everybody stand up that has a watch on, I'm not sure anybody would stand up. I don't see it. If you look at what kids are wearing …. Their watch is this [pointing to an iPhone]."

Whatever Apple is working on, they're setting the bar very high and it's not going to be a watch like Samsung's Gear or the one Google is to launch in June. Apple knows that they're not the first in this space. Yet like the MP3 player space, when Apple walked in with the iPod, Apple's iTunes Store and a new approach to buying music, they created an entirely new user "experience." Something that the late Steve Jobs was adamant about delivering.

That's not what we're likely to see coming from the Android camp anytime soon. Then again, maybe Google will surprise us this time around. In the coming weeks and months we'll see if Google is able to think beyond the obviousness of what a digital watch should be.

Though if there's anything we can count on, it'll be Google trying to drown out anything Apple has to say at their developer conference in June. So expect the circus to really get crazy this June as both camps try to impress tech crazed fans around the world that they're the ones that really have their finger on the pulse of innovation that you care about.

Other Google Watch Concepts could be found on Google Images