Could China's new Search Engine be a Google Killer? 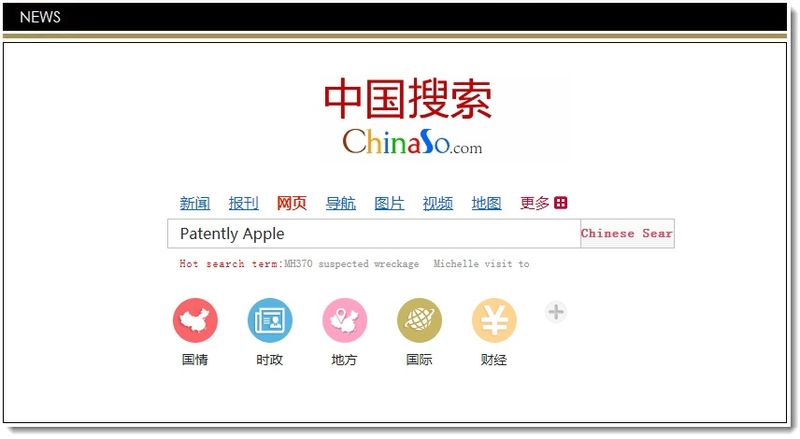 A new Chinese-language online search engine - Chinaso.com - was launched Friday, marking China's first search service set up by the country's major news organizations. China is the world's largest market and it looks like they're trying to rid itself of Google. Though to be honest, there's an emerging trend in China that is out to challenge, if not eventually marginalize, traditional US based software kings.

In respect to the new ChinaSo.com engine, it allows users to search articles from the country's newspapers and magazines. Its service covers news, website, pictures, videos and maps, with 16 channels ranging from economy to sports and applications for mobile users, Xinhua reported.

It should be noted however that the new search engine isn't limited to China. It also works like any other search engine being able to search North American sites as well such as Apple, TED, Patently Apple, CNET, MacDailyNews, Mac9to5 and others.

Earlier this year we reported that China's Institute of Software at the Chinese Academy of Sciences together with Shanghai Lian Tong Network Communication Technology Inc. developed its own mobile operating system called COS to take on iOS and especially Android. Li Minshu, director of the institute stated at the time that "The release of COS aims to break the monopoly that foreign companies have on fundamental software, and to introduce an operating system with our own intellectual property rights."

While there have been others trying to challenge iOS and Android in the past, such as Firefox and other Linux based operating systems, most haven't made much of a dent in the market.

Yet in contrast, a native Chinese OS may be able to tap into the "nationalistic" fervor that exists in any country. And with a market the size of China, it's likely to carve out a dedicated fan base over time. At the moment however, these moves towards a new search engine and mobile operating system are tiny blips on the radar screen. Though I'm quite sure that today's software kings are keeping a sharp eye on these developments that could be damaging to their respective market positions over the next decade.

For now, China's new ChinaSo.com search engine could be more of a threat to Google, as it runs on any operating system today. Could it be a Google search engine Killer in the long run? While that certainly can't be answered today, its the trend toward large corporations and institutions coming together to find home-grown software solutions to take on Google's search engine and Android that has to have Larry Page's Company a little on edge these days.