Are the Hopes for a Future Apple HDTV really Toast? 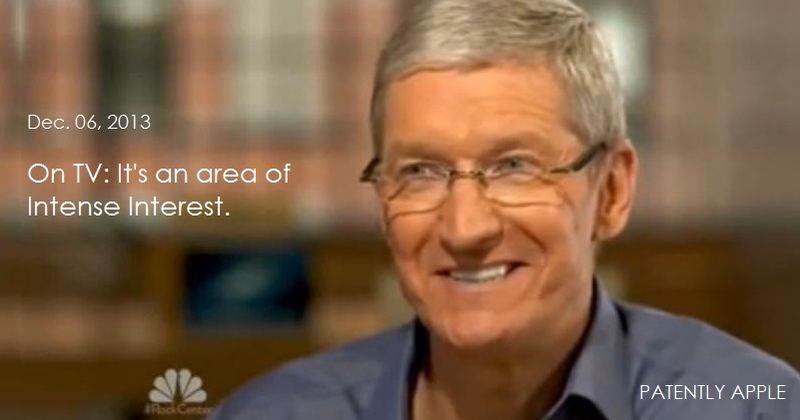 In December 2013, NBC's Brian Williams interviewed Apple's CEO Tim Cook. Williams asked Cook, "What can you do for television watching … what do you know that's going to change the game that we don't know yet. Cook's response: It's a market we see that's been left behind." He further noted that "It's an area of intense interest – I can't say more than that." Was Cook Lying or is a tale out of a new book titled Haunted Empire a make-believe accounting of what Steve Jobs said about making an HDTV? Do we trust Apple's CEO who recently stated that Apple TV is no longer a hobby, or a reported account that's about three years old at this moment in time? You be the judge.

Today, Business Insider reported on a segment of a new book titled "Haunted Empire: Apple after Steve Jobs" by former Wall Street Journal's Yukari Iwatani Kane. The segment recounted an Apple executive retreat. The report states that "One person asked if Apple was going to release a television next. There were already rumors all over the place that it was Apple's next conquest. Yukari says 'Jobs didn't hesitate.'" He said, "No."

Reportedly Steve Jobs stated that "TV is a terrible business. They don't turn over and the margins suck." Though he reportedly said that he did want to control the living room and went on to state that Apple TV would remain a hobby until Apple got all the content it needed.

Interestingly in February of this year, Apple's CEO Tim Cook admitted that Apple TV was now too big to a hobby racking up a billion dollars in sales. Apple TV is in fact closer to what Steve Jobs pointed to as being a pivotal point in the evolution of Apple TV: "Until Apple got all the content it needed."

Yet Yukari says that some people in the room believed Jobs' comments on TV. Others, the "veterans in the room" weren't sure that Jobs really meant it. Those people thought it was a message from Jobs to focus on what they were doing instead of trying to think of the next thing too quickly.

Yes, the "veterans in the room" weren't sure that Jobs really meant it." That's really a key point. Steve Jobs had in other interviews over the years laughed at the idea of a tablet or cloud computing. Jobs had openly denied that Apple was ever working on a phone. And so freeze framing a reported incident of Steve talking about a TV three years ago is as close to useless as it gets. And with Apple's veteran executives saying they weren't really sure Jobs meant it, does it really sink the idea of a future Apple TV as in HDTV? No.

Even the business models Jobs was quoting is now woefully outdated. When a 32" HDTV cost $2500 it wasn't a turn-around electronic device. Today, a 32" HDTV sells for less than an iPhone 5S. And Apple has always been able to sell a commodity device for more by elevating its styling or software. The iPhone wasn't and isn't a cheap smartphone. So this is not an argument that stands the laugh test.

That's not to say that Apple is racing to introduce an HDTV to market in the foreseeable future. But it also doesn't write it off by any stretch of the imagination either. Apple's engineers are still plugging away at new aspects of an HDTV, like this fused glass housing that's a recent patent-pending invention of Apple's.

There's a lot more technology that Apple is working on for 4K resolution based displays. We still don't know what Apple acquired PrimeSense for who is a leader in 3D technology. This technology was used in Microsoft's Kinect. It could also be redirected to Apple's long standing invention regarding future controls for a TV, wall display or gaming system.

And if you want to own the living room, TV's with advanced FaceTime capabilities built-in will be a must. Today, we don't have eye-to-eye contact with those we talk to on Apple's FaceTime. To do that, displays would need to have tiny cameras built right into the fabric of the display itself. Yes, like Apple's 2006 invention about integrating hidden sensors into the display.

And one more thing: The very Steve Jobs who reportedly said "no" to a TV three years ago is the very same Steve Jobs who told this biographer Walter Issacson that he "cracked it." A reference made about cracking the code to building an HDTV.

Seth Weintraub of 9to5 Mac pointed to the following specific quote on October 21, 2011:

"He very much wanted to do for television sets what he had done for computers, music players, and phones: make them simple and elegant," Isaacson wrote.

Isaacson continued: "'I'd like to create an integrated television set that is completely easy to use,' he told me. 'It would be seamlessly synced with all of your devices and with iCloud.' No longer would users have to fiddle with complex remotes for DVD players and cable channels. 'It will have the simplest user interface you could imagine. I finally cracked it.'"

In the end does the accounting of one a one-word statement made at an Annual Apple Executive Retreat three years ago sink the hopes for a future HDTV from Apple? Ha! – No, of course not. Especially in light of Steve Jobs articulating a snippet of his vision for an Apple HDTV (or the like) prior to his passing which would counter any previous statements on the matter.

On the flipside, I wouldn't be expecting Santa to be filling his sleigh with them this year, either. But one of these days, you never know.