The US Patent and Trademark Office officially published a series of 38 newly granted patents for Apple Inc. today. In this particular report we cover a powerful new invention that has come out of the blue. It could apply to a future version of Siri that is designed to work with distributed sensors that a user could place throughout their home, Office or beyond. It's an advanced reminder system that could notify you that it's time to take your medications or that you have appointments or meetings in any room equipped with the appropriate sensors. The application has no limits. It could apply to reminding users of TV programing or any other reminder type users deem important. This wild invention coming to light right after Jonathan Ive's recent statement that Apple is at the beginning of remarkable time, is impeccably timed.

Apple Granted a Patent for a New Class of Siri Application

Apple has been granted a patent today for their invention relating to intelligent systems and relates more specifically to tools for building classes of applications for intelligent automated assistants like Siri.

Intelligent systems, such as intelligent automated assistants, that are capable of interacting with humans (e.g., by observing user behavior, communicating with users, understanding observed situations, anticipating what a user may need and acting to produce useful behavior) are valuable in a variety of situations. For example, such systems may assist individuals who are impaired in some way (e.g., visually, auditorially, physically, cognitively, etc.), including elderly people (who may be stricken by one or more ailments), surgeons (whose eyes, hands and brains are constantly busy when performing operations) and business executives (who may have numerous tasks to accomplish), among others.

Therefore there is a need in the art for a method and apparatus for building an intelligent automated assistant.

Apple's granted patent generally relates to a method and apparatus for building an intelligent automated assistant. Embodiments of the present invention rely on the concept of "active ontologies" (e.g., execution environments constructed in an ontology-like manner) to build and run applications for use by intelligent automated assistants. In one specific embodiment, a method for building an automated assistant includes interfacing a service-oriented architecture that includes a plurality of remote services to an active ontology, where the active ontology includes at least one active processing element that models a domain. At least one of the remote services is then registered for use in the domain.

In Apple's patent FIG. 1 noted below we're able to see a schematic diagram illustrating one embodiment of an active ontology execution environment #100 according to the present invention. The execution environment comprises an active ontology #102 that is adapted to receive one or more input facts or events #104 and process these inputs to produce useful actions #106.

It's noted in the granted patent that the active ontology is tailored to a specific context. For example, the active ontology may be adapted to remind a user to take medication after meals, where at least some of the input facts relate to events collected from the user's surrounding environment (e.g., "the user is in the kitchen", "the user is eating", "the time is 8:00 AM", etc.) and at least one of the actions is produced in response to these facts (e.g., prompting the user to take the medication at the appropriate time). 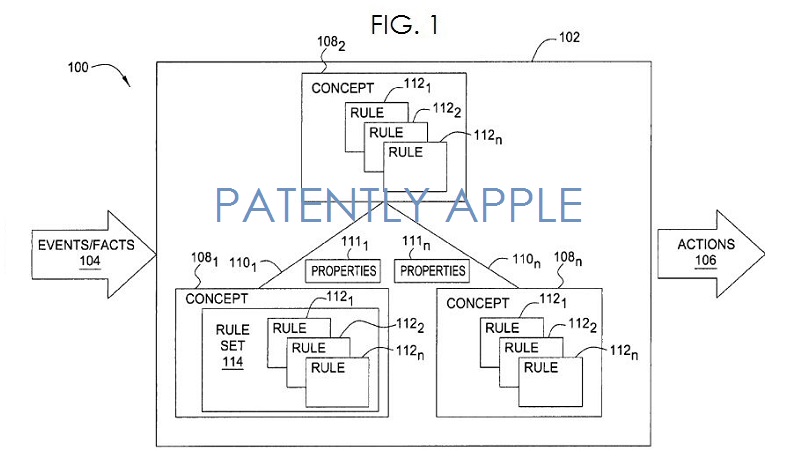 In Apple's patent FIG. 2 noted below we're able to see a schematic diagram illustrating one embodiment of an exemplary active ontology that is configured as an autominder for reminding a user to take medicine after meals (e.g., configured for activity and/or time recognition). 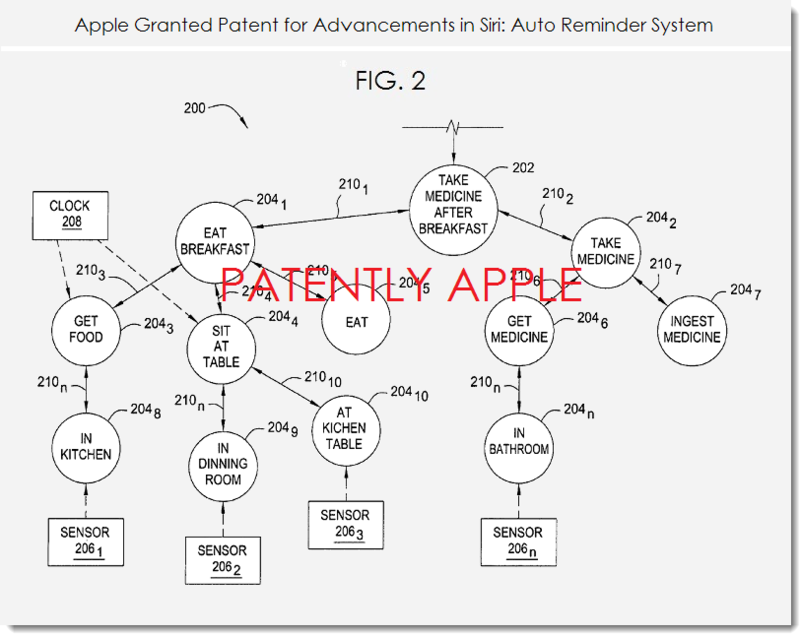 Active Sensors Distributed Throughout the Home

In addition, a clock (#208) may also be in communication with the concepts to enable the management of temporal constraints (e.g., the user is expected to sit at the table for approximately twenty-five minutes while eating breakfast; the user should take his/her medicine approximately thirty minutes after finishing breakfast; etc.).

Thus, if the target task isn't observed as being executed (e.g., the active ontology does not determine that the user has taken the medicine after a meal or within a predefined period of time after finishing a meal), one or more of the processing elements (concepts 204) may generate a reminder to prompt the user to perform the target task 202.

Although the active ontology illustrated in FIG. 2 is configured to manage activity and time recognition tasks, those skilled in the art will appreciate that similarly constructed active ontologies may be built for natural language recognition, task automation and other useful tasks. In general, the same structure or rule or set of rules can be used both to observe and understand the surrounding world and to act on such observations.

Apple credits Adam Cheyer and Didier Guzzoni as the inventors of granted patent 8,677,377 which was originally filed in Q3 2006 and published today by the US Patent and Trademark Office. To review today's granted patent claims and details, see Apple's patent. Apple was granted another Siri related patent last week that you could review here.

For interest sake, news out of korea today points to a similar system that is designed for outdoor/city applications monitored by the police and/or other inter-governmental agencies. The design is from Korea's IVS Technolgy. While it's interesting, I don't think an automated digital assistant shouting out to criminals "To Stop" will really amount to anything unless it's backed by machine gun fire. I don't see any city council passing such bylaws outside of Arizona (ha!).