Apple Sued for Over $1.7 Billion in new Copyright Infringement Case

Roland Chambers from South Carolina has filed a copyright infringement lawsuit against Apple, Amazon and CD Baby over 12 original pieces of copyrighted sound recordings and two pieces of original artwork for the album cover. Chambers is looking for Apple to pay the larger amount. In total, the plaintiff is seeking an insane amount of over 5.2 billion dollars. I don't think that the Rolling Stones entire collection would cost that much. Then again, everyone has the right to have their day in court.

The Factual Allegations Filed in the Complaint

According to the document filed with the court, the Plaintiff Roland Chambers presented his "Factual Allegations" regarding this case of copyright infringement, as follows: "On or about July of 2001, Plaintiff provided Defendant #3 (CD Baby) with five compact discs including 12 original pieces of copyrighted sound recordings and two pieces of artwork for the album cover.

In consideration for the compact disc, CD Baby (Defendant #3) executed a consignment only contract, which included distribution of the five discs sent only, no reproduction clause, warehouse storage fees if not sold, and no ownership transfer of copyright.

No payment was reported or issued to plaintiff for any of the five discs.

Plaintiff discovered the compact disc were still selling in March 20l4 (beyond the quantity ever legally produced) and in various formats and demanded explanation, as well as payment.

CD Baby was to distribute disc and not authorized to create any reproductions; however, more than five discs exist today, and CD Baby is only definitely aware of the whereabouts of one (1) disc. A representative states one (1) disc was sold and (3) were likely recycled/destroyed. This leaves one more disc unaccounted for prior to counterfeit units being placed on the market

Amazon.com, including not only the U.S. Website, but domains in Spain, Italy, England, Germany, India, France, Japan, Denmark, and several more are actively selling disc and allowing third party sellers to continue selling copyrighted material not owned, and likely counterfeit based on disc produced, even as of 03/16/2014. This is after multiple take-down request made electronically online and by hard copy via mail.

Apple Inc. has without any consent or permission provided access to 12 pieces of work in digital formats. These were not only illegally provided and spread to other websites that promote digital piracy, but only three (3) of the 12 songs were available online through Garageband.com for a short period in 2000-2002. These three (3) pieces were not available for download, but only for streaming to poll the audience. The other nine songs were converted without the knowledge of the copyright owner.

To the filing of this action, Defendants # l (Apple), #2 (Amazon) and #3 (CD Baby) have failed and refused to provide payment resolution for the illegal use of registered copyrighted materials over the last 14 years.

Defendants are therefore in breach of the Copyright Act for Sound Recordings (physical), Digital Millennium Copyright Act, and the Exclusive Reproduction Rights the Plaintiff has as the copyright owner.

What Judgment Roland Chambers Seeks from the Court

If Apple and the other Defendants are found guilty, Plaintiff Roland Chambers is asking the judge to grant him the following judgment:

3.    Explanation for demand is included.

4.    Reasonable attorneys' fees and costs of suit herein incurred, as well as further relief as the court may deem proper is also requested.

Just in case you're thinking that the amount that we listed above is a typo, the Plaintiff's exhibit illustrated below confirms that it's not. 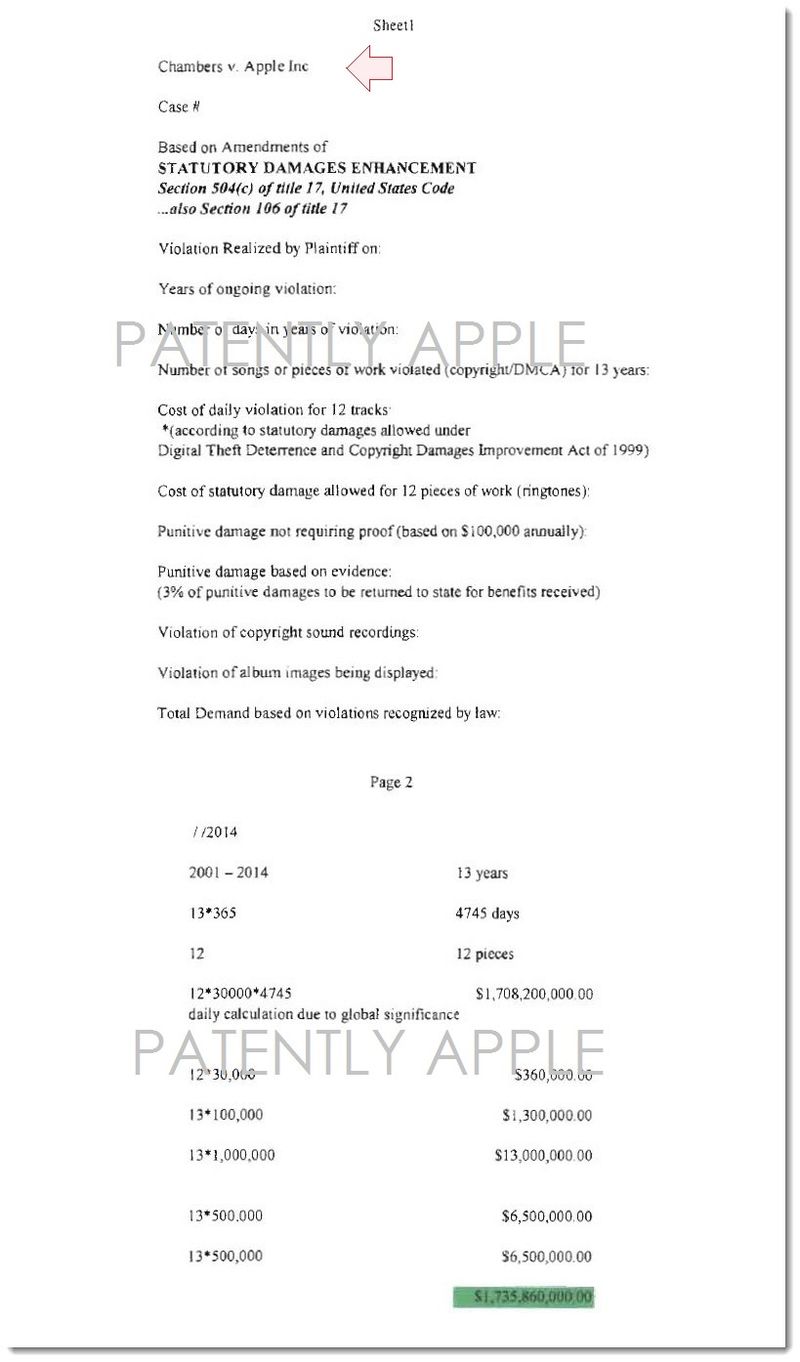 For the record: The red arrow noted at the top of the document illustrated above was added by Patently Apple to show this accounting was focused on the part pertaining to Apple alone. The green highlight at the bottom of the document was part of the document filed with the court that was made available to the public.

The copyright infringement case presented in today's report was filed in the South Carolina District Court, the Columbia Office in Richland. The case was assigned to the Honorable Joseph F Anderson, Jr and referred to Magistrate Judge Paige J Gossett.

Patently Apple presents only a brief summary of certain legal cases/lawsuits which are part of the public record for journalistic news purposes. Readers are cautioned that Patently Apple does not offer an opinion on the merit of the case and strictly presents the allegations made in said legal cases / lawsuits. A lawyer should be consulted for any further details or analysis. About Comments: Patently Apple reserves the right to post, dismiss or edit comments. On most legal cases, comments will be closed.