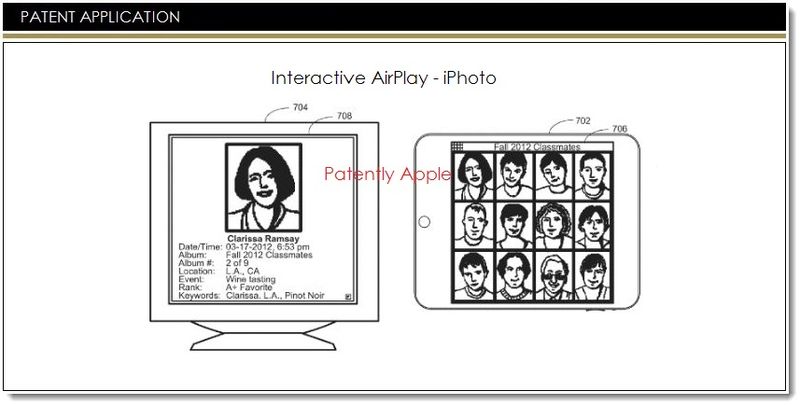 On March 6, 2014, the US Patent & Trademark Office published a patent application from Apple that reveals the advancement of their current AirPlay feature to be interactive. Today's patent application clearly illustrates that Apple is working on making it possible to not only make Airplay interactive but also allow unique dual-display functionality that complement one another. For instance, a user will be able to use Airplay to have a game on an iPad play on their TV while allowing the iPad to further become a game controller to interact with the game. Apple provides us with a series of examples illustrating the many applications that they're contemplating for this new feature. Apple's first patent application that discussed the possibility of this future version of interactive Airplay was revealed last May.

However, conventional approaches for using a primary display with a secondary display have shortcomings. First, users have to manually configure the settings of the primary and secondary displays, a process that can confuse and intimidate a significant number of users. Second, even for users who are capable of performing such configuration, the process is time-consuming, inefficient, and irritating to the users' overall computing experience. Third, even technically savvy users may fail to discover display arrangements and/or settings that would maximize the advantage of having two displays.

Apple's invention generally relates to presenting information in an electronic environment and in particular to content presentation and manipulation using multiple electronic devices. In a simpler way of viewing this, it's advancing today's AirPlay so that it's an interactive experience. One that could also allow different interfaces to work with each other.

For instance, an iPad could become a game controller for a video game on your TV as noted below in patent FIG. 8. 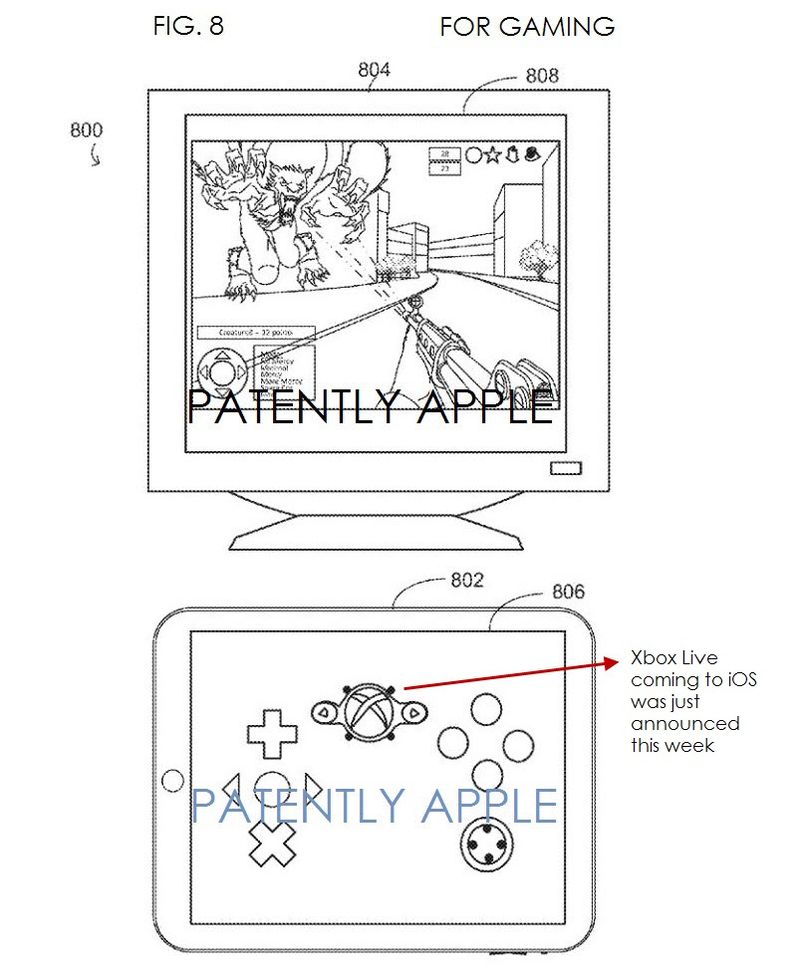 Apple's graphic shows Xbox gaming logo and this week Microsoft announced that the were bringing Xbox live to iOS.

Apple further notes that certain embodiments of the present invention relate to content presentation across multiple electronic devices. In some embodiments, content of a software application can be presented across the displays of multiple electronic devices in an intuitive and coordinated fashion. Below is patent FIG. 11 illustrating Apple's Keynote app on the iPad with just the current slide showing up on a television of other kind of secondary display that non-touch based.

User interfaces displayed by the displays of the electronic devices may represent different aspects or different levels of a set of information items in the software application. 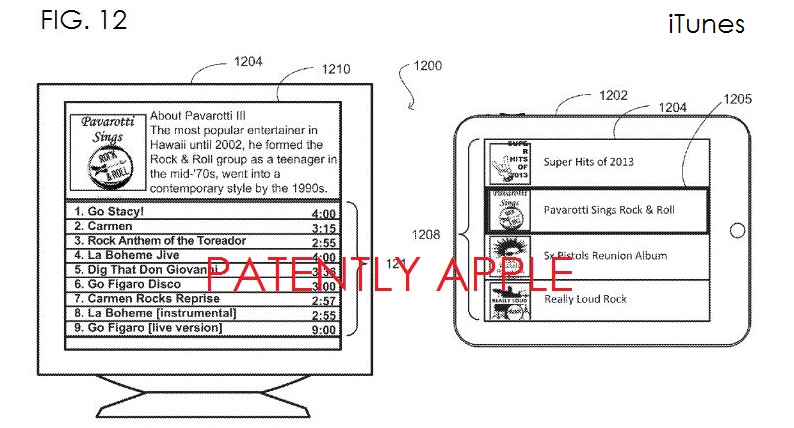 Certain embodiments of the present invention enable coordinated interaction and presentation across a touch device and a non-touch device. A touch device (also referred to as touchscreen device) can be any electronic device that can receive user input via a touchscreen or a display of the device, such as a tablet computer or a smartphone.

A non-touch device (also referred to as display device) can be any electronic device that cannot receive user input directly through a display coupled to the device, such as a conventional light emitting diode (LED) computer monitor or a liquid crystal display (LCD) television screen.

In some embodiments, a touch device can establish a connection with a non-touch device. At least one of the devices can execute an application where content of the application may be presented across the displays of the devices. A set of user-selectable user interface items can be displayed on the touch-enabled display of the touch device. The electronic device can receive a user selection of one of the set of user interface items displayed on the touch-enabled display. In response to receiving the user selection, another set of information items can be presented on the non-touch device.

Other Apple Examples of Interactive Airplay 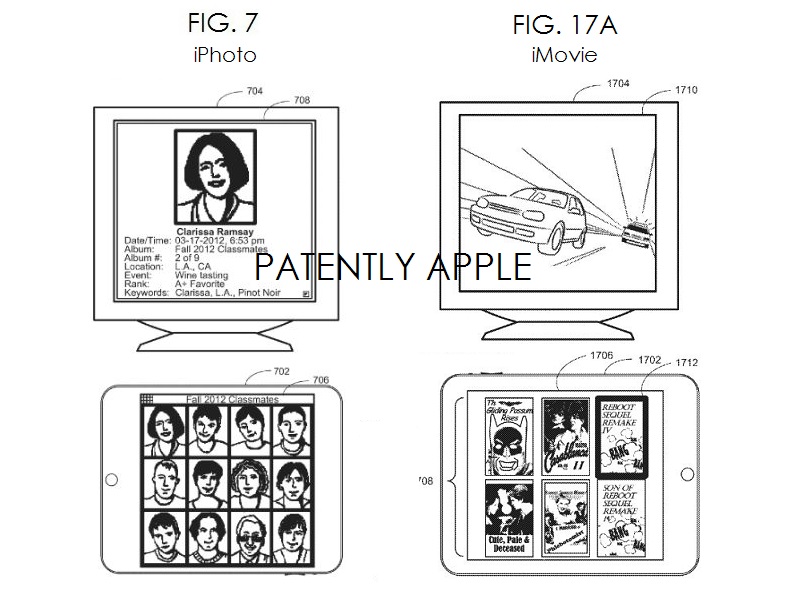 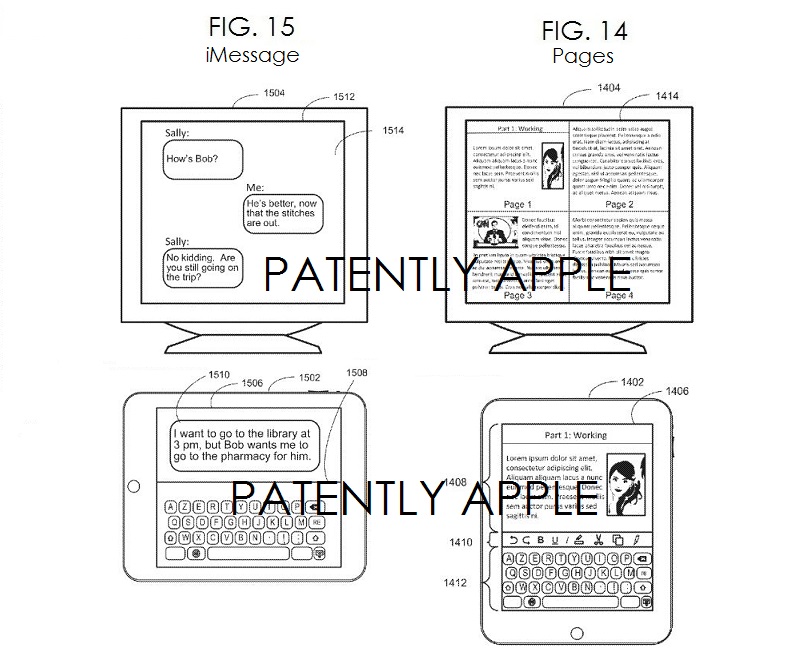 In Apple's Patent FIG. 10 shown below we're able to see another example of interactive AirPlay which shows how different levels of information that can be displayed on a TV and an iPad. In this example, FaceTime is running on a TV. The application generates a first user interface including a video image of the local user for display on an iPad. The application further generates a second user interface including a video image of another participant (or multiple other participants) with whom the user is having the conference for display on a TV. By presenting an arrangement of the video images that would be intuitive to a user (e.g., where the user's local video is shown on an iPad and the remote participant's feed is viewable through a TV), the application can provide the user a better user experience in using the application.

In some embodiments, a number of control elements such as menus, slider bars, text fields, and buttons representing volume adjustments, lighting adjustments, focus adjustments, and/or zoom adjustments functionality can be displayed on the iPad such that the user may make adjustments when desired by performing a user input through the touch-enabled display of the iPad. As such, the remote video need not be obstructed by control elements. The controls may also fade out in some embodiments when the user has not interacted with the touch-enabled display beyond a threshold period of time (e.g., after 5 seconds), thereby increasing the screen real estate for the user's video image.

In Apple's patent FIG. 9 shown below we see yet another example of AirPlay in Interactive Mode. Apple's patent FIG. 9 illustrates another example of how different levels of information can be displayed on a display device and a touchscreen device. In this example, Apple's Maps application is being executed on a TV and an iPad. Maps will be able to generate views of different perspectives and for different levels of detail of a particular map area on the iPad and TV in response to a user command. 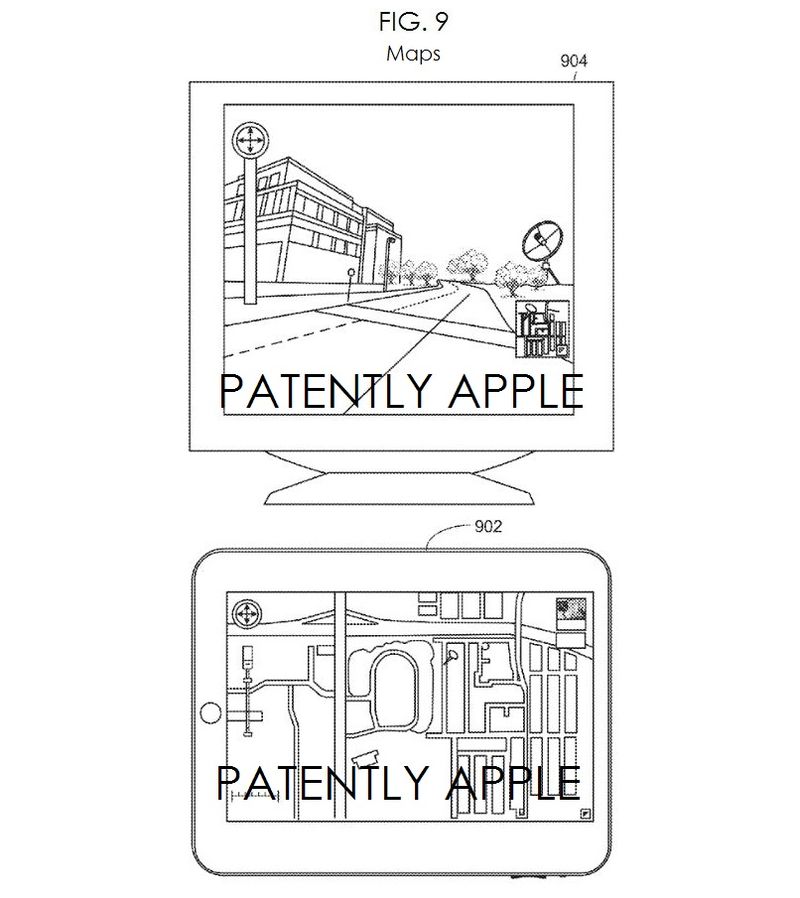 As shown in this example, the iPad shows a bird's eye view of a map area while the TV shows a street level perspective view of a particular location within the map area.

In some embodiments, the iPad may further display a set of selectable controls that the user can select to indicate the direction of the street view to display on their TV.

Apple credits Julian Missig, Jeffrey Bernstein and Marcelo Coelho as the inventors of patent application 20140068520 which was originally filed in Q3 2012. 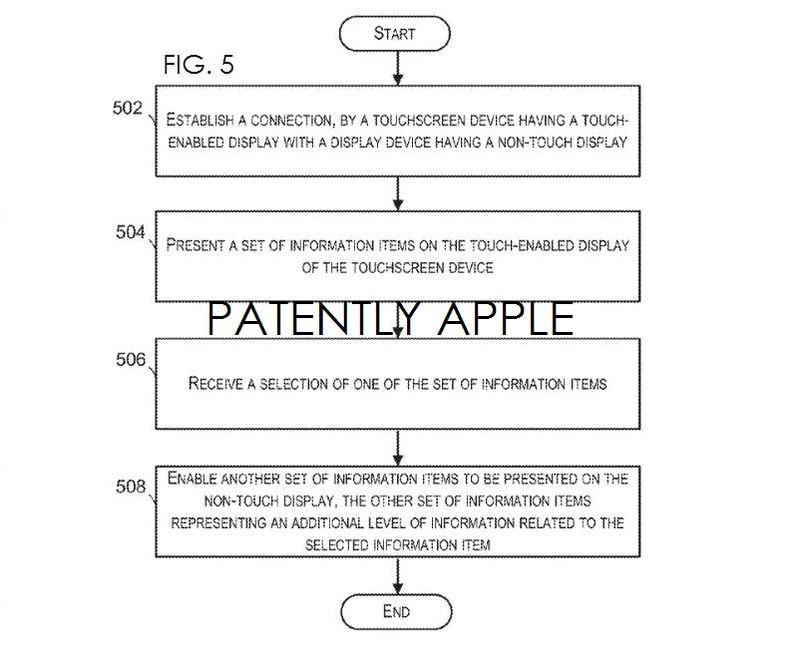