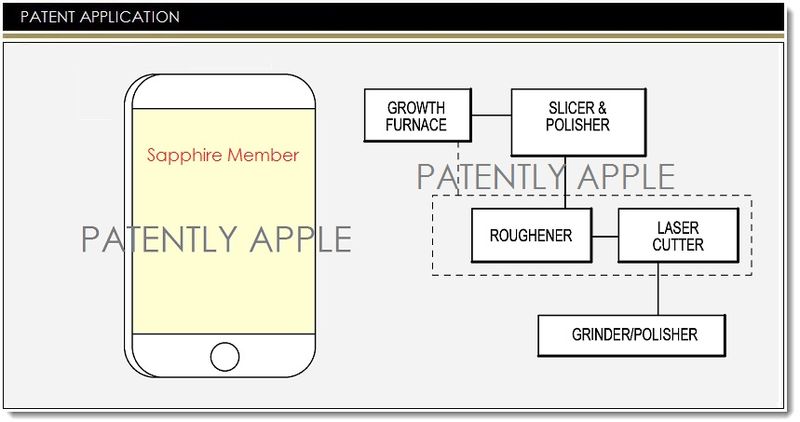 In early February we learned about Apple's new Sapphire manufacturing equipment arriving at their new Arizona plant for processing sapphire materials. We learned days later that Apple's Arizona Plant could manufacture synthetic sapphire at two times the current worldwide capacity. And at the top of this month, Apple's CEO Tim Cook stated that their new sapphire plant wasn't for creating iPhone display covers but rather reserved for a secret project. Today we learn more about Apple's sapphire processing methods and systems through two new patent applications published by the US Patent Office. The patent covers special laser cutting techniques and specialized furnaces. And while the Arizona plant may not be used for making sapphire iPhone display covers, some other plant will, as the patent clearly illustrates the process in context with the iPhone as noted in our cover graphic.

As may be appreciated, due to certain characteristics of corundum, including its hardness and transparent characteristics, among others, it may be useful in a variety of different applications.

Methods related to efficient processing of sapphire are discussed in Apple's patent filing which are expected to both speed manufacture of corundum for applications and make the use of conundrum cost effective.

Yet another embodiment may take the form of a method for cutting polished corundum including a surface preparation step and a cutting step. In the surface preparation step, a polished portion of the surface of the corundum is prepared for subsequent cutting through in-coupling of laser energy. In the cutting step, a laser is directed to the portion of the polished surface of the corundum that has been prepared.

Apple's patent FIG. 3C noted below illustrates an embodiment in which the laser #123 is used to roughen the surface of the sapphire. As illustrated in FIG. 3C, the laser may move relative to the sapphire member so as to create a cutting pattern #124 on the surface of the sapphire. The movement and positioning of the laser may be precisely controlled so as to create the pattern (dashed line) of a desired sapphire member, which is a display cover as noted further below. 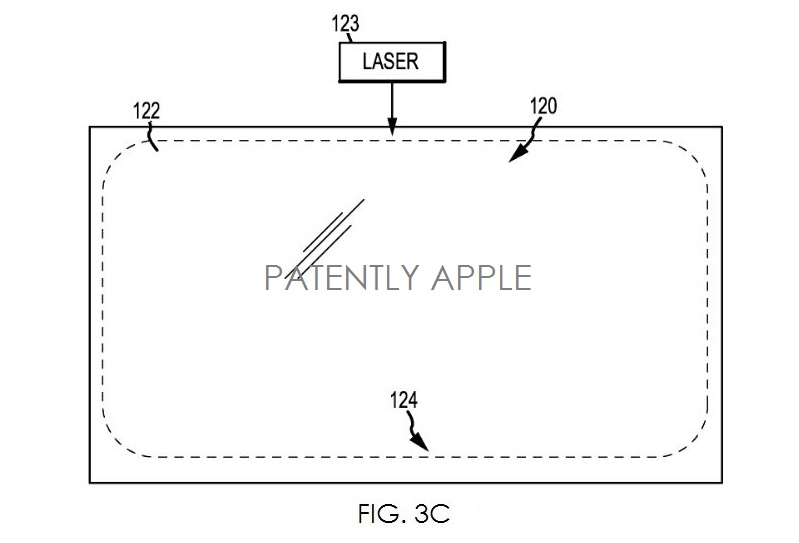 Turning to Apple's patent FIG. 5 noted below, a cutting step is illustrated. In the cutting step, a laser #130, such as a microsecond fiber laser, is focused on the roughened spot #121 to laser cut the sapphire ribbon #120. The laser may implement different pulse lengths, frequencies, pulse energies, and varying average power levels than the laser #123 of FIG. 3C of the roughening step. 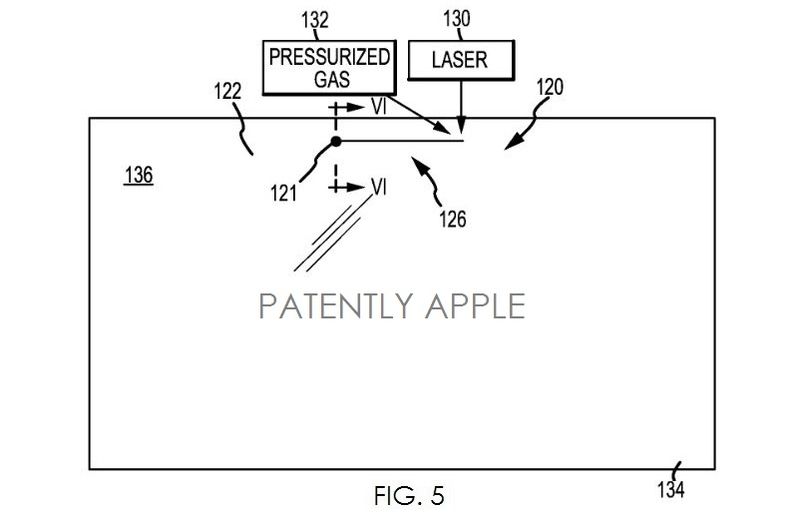 Apple further notes that pressurized gas, such as air, nitrogen gas or other suitable gas #132 is directed at the melted sapphire to remove it, leaving a cut #126 through the sapphire ribbon.

Apple's patent FIG. 8 illustrates an example electronic device, an iPhone, in which the sapphire member #136 may be implemented. It just happens to be illustrating an iPhone with a bezel-free edge-to-edge display design. 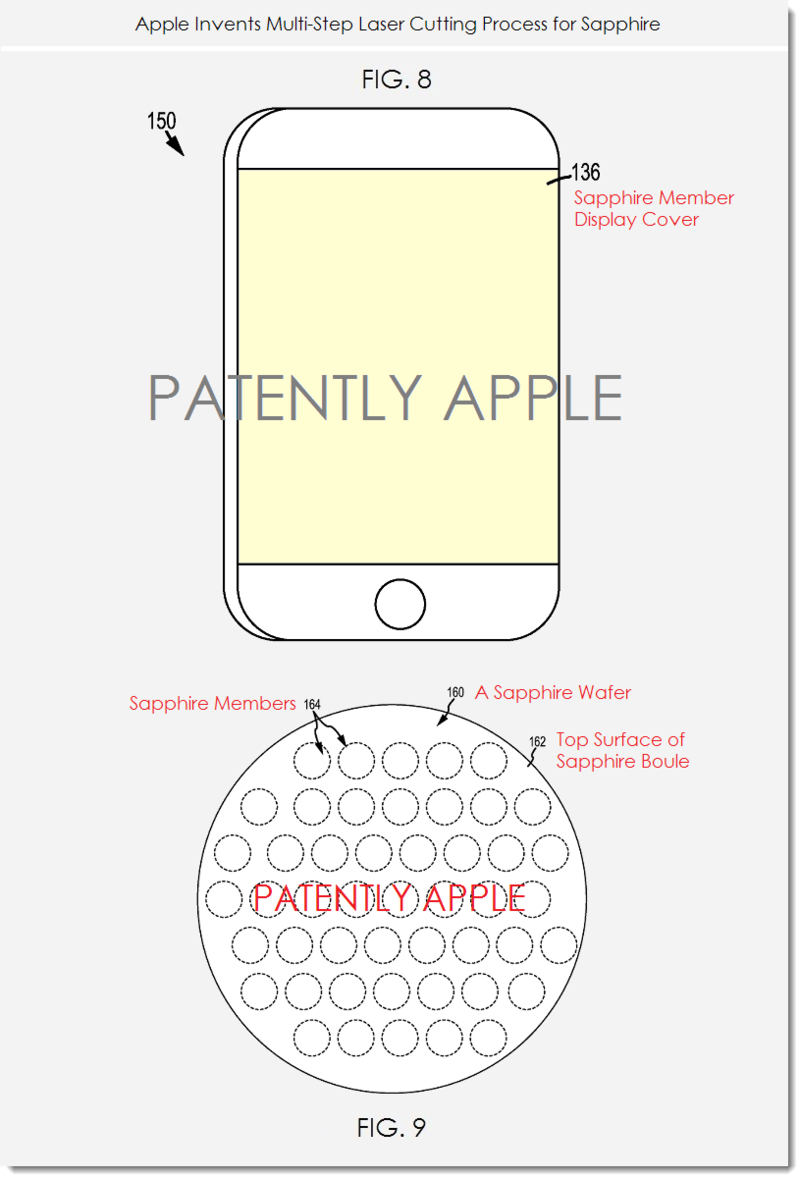 In Apple's patent FIG. 9 we're able to see an illustration of a sapphire wafer #160 from which many sapphire members may be cut. Generally, the sapphire wafer may be sliced from a grown sapphire boule. 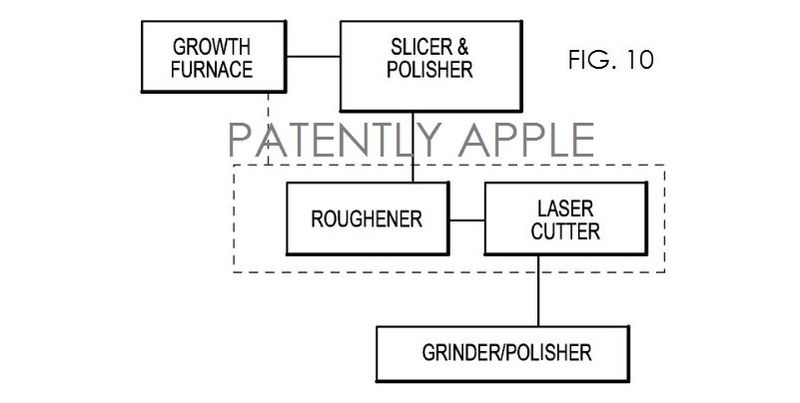 And lastly, in Apple's patent FIG. 10 noted above we're able to see an example sapphire growth and processing system #170 which includes a sapphire growth furnace #172, which may take any suitable form such as an EFG furnace for example.

Additionally, the system may include preprocessing equipment such as slicers and polishers #174. Additionally, an annealing furnace may be provided to help cure any defects in the sapphire crystal from the growth phase.

The system includes a cutting system #176 that includes a roughener #178 and a laser cutter #180. As discussed above, the laser cutter may be configurable such that its power level and/or focal point may be adjusted so that it may serve dual purposes as a roughener and cutter.

The system further may include equipment for one or more post-processing steps such as grinding and polishing. An annealing furnace may also be provided after cutting the sapphire members to cure any defects that resulted from the cutting and/or other processing steps.

Apple notes that the system is believed to achieve efficiencies based on the equipment and processes performed in creating a sapphire member for use in electronic devices. In particular, the laser cutting of the sapphire is anticipated to save costs in the long run as it will not experience wear in the same way a mechanical cutter would. Additionally, the speed at which the laser cutter may operate may provide for increased production. Moreover, the processes and systems described herein may scale well and may be configurable to achieve further efficiencies. In particular, for example, one or more rougheners may feed a single laser cutter or a single roughener may feed multiple laser cutters.

Apple credits Anthony Richter, Dale Memering and Vincent Yan as the inventors of patent application 20140076299 which was originally filed in Q3 2012.

Apple's patent abstract states that their invention is about "Systems and methods for efficient heating during production of corundum. One embodiment takes the form of a system for processing corundum including a first furnace and a second furnace. The first and second furnaces are sequentially arranged and heat from the first furnace is subsequently used to heat the second furnace." 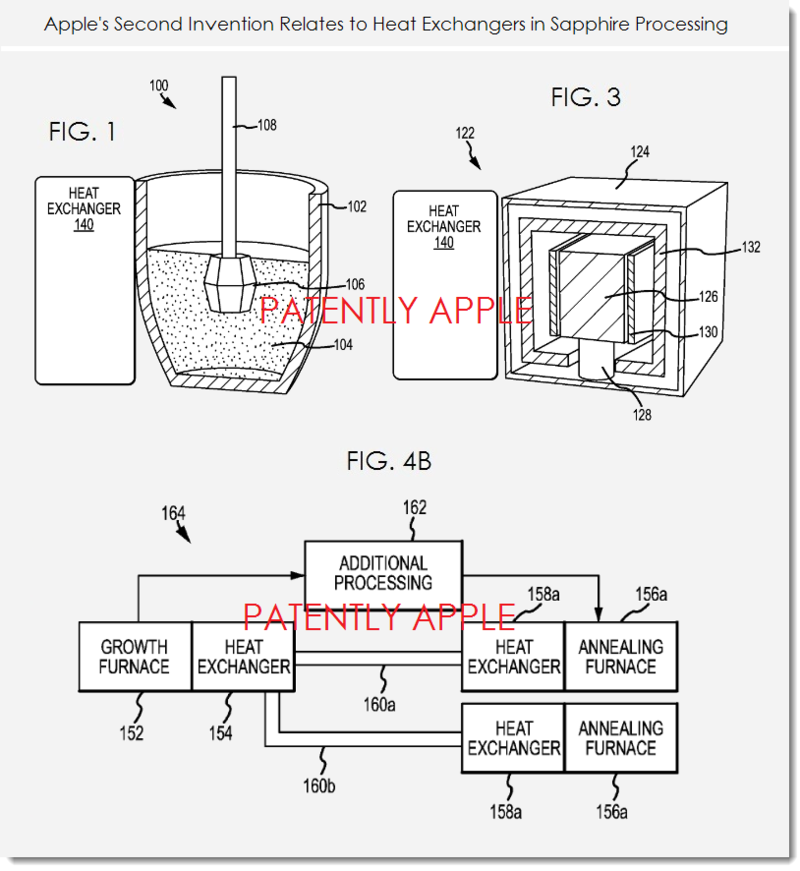