On March 27, 2014, the US Patent & Trademark Office published a patent application from Apple titled "Oleophobic Coating on Sapphire." Apple's invention covers a surface coating apparatus that could spray oleophobic and other coatings onto the glass of an iDevice. Apple's patent also hints that the body and bezel of future iDevices could be made of plastic, aluminum or an amorphous glass material which translates into being a liquid-metal. Today, we get another piece of Apple's sapphire materials puzzle.

Electronic devices may include a range of different touch-sensitive input surfaces, for example as incorporated into displays, track pads, keyboards, and combinations thereof. In use, however, oils and other deposits may affect appearance and performance, particularly where information is also displayed on the touch-sensitive surface (e.g., on a touch-sensitive display).

A surface layer may be formed on the transition layer, with a substantially silica content, for example substantially 100% silica or silica glass, and the surface coating may be oleophobic. A portable electronic device may comprise the coated component, the portable device may include a window, the oleophobic coating may be provided on an exterior surface of the window, and the window may also include a touch screen.

In method embodiments, a sapphire substrate for a touch screen window is provided with a substantially single-crystal base layer. A transition layer of alumina and silica and a surface coating are formed on the substrate, where the surface coating preferentially bonds to the silica as compared to the alumina. 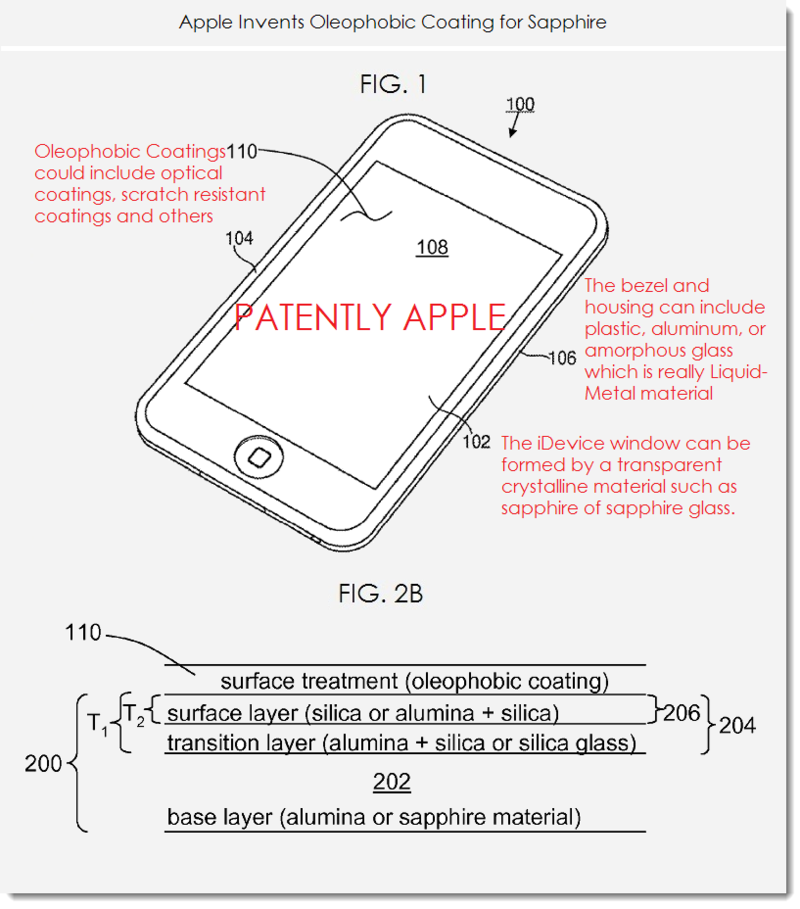 Apple's patent FIG. 1 noted above is a perspective view of electronic device 100, for example an iPhone, iPad or other portable device having at least one surface on which an oleophobic coating or other surface treatment is applied.

This isn't the first time that Apple has presented the concept of using liquid-meal the material in a patent relating to iDevice designs. In December 2013 we posted a report on this very idea titled "Killer Patent: Apple Reveals Sapphire Flexible Transparent Display Devices Created with Liquid-Metal."

Getting back to today's patent, Apple also notes that window #102 of patent FIG. 1 is formed of a suitable transparent or translucent material, for example a transparent plastic or polymer material, a transparent, amorphous glass material, or a transparent crystalline material such as sapphire or sapphire glass.

Apple's patent FIG. 2A noted above is a cross-sectional schematic view of substrate #200 with an oleophobic coating or other surface treatment #110.

In Apple's patent FIG. 3 noted below we're able to see a schematic view of surface processing apparatus #207 that relates to applying a substrate onto electronic devices. In this particular example, the deposition system includes one or more reservoirs (#210) with various coating materials (#208 - e.g., silica, alumina, and an oleophobic material or other surface treatment).

Additonally, Apple notes that an inert gas (#212 - e.g., argon or nitrogen) may be supplied by a gas source (#216) through purge or pressurization flow pipe (#214) in order to reduce oxidation, wetting and contamination within the reservoirs. 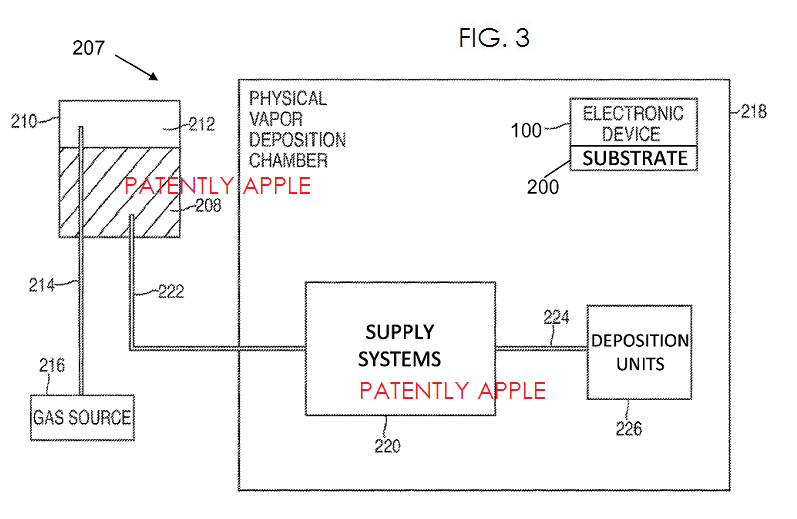 In one particular embodiment, Apple notes that the substrate is formed of a substantially single crystal (e.g., synthetic) sapphire, which may be cut to size for a particular application, for example a synthetic sapphire blank for a bezel, window or other component of a mobile phone or other portable electronic device as shown in FIG. 1. This aspect of the patent was detailed in last week's patent report titled "Apple Reveals Laser Cutting Techniques for Processing Sapphire."

Apple credits Douglas Weber and Naoto Matsuyuki as the inventors of patent application 20140087197 which was originally filed in Q3 2013. Considering that this is a patent application, the timing of such a product to market is unknown at this time.