At the top of the month Apple introduced CarPlay at the International Motor Show in Geneva. Today, the US Patent & Trademark Office published a patent application from Apple that reveals a possible future advanced interactive vehicle manual. The patent titled "Identifying and Presenting Information based on Unique Vehicle Identifier," will in effect reinvent the in-vehicle owner's manual. It will be able to provide users with the exact part numbers needed for their vehicle and via GPS tell them what dealers or auto shops nearby carry them. The system could provide users with video instructions about problems occurring in the vehicle and may even use Siri to converse with the manual. While at the time of this patent filing Apple focused on the manual being run on portable devices like the iPhone and iPad, the patent hints of it being used in an auto's radio which will likely now translate into being accessible via CarPlay.

There are many situations where a user may want to know information about a vehicle. For example, if the user is operating an unfamiliar vehicle, the user may want to know the location and functionality of the vehicle's user controls, a recommended fuel or oil type for the vehicle, or other information. Vehicle manufacturers often issue user manuals containing such information. Reviewing a user manual, however, can be quite time consuming, and in some instances a user manual may not be present for the user to review.

According to various aspects of the present invention, a portable electronic device such as an iPhone can be used to present vehicle-specific information to a user.

In some embodiments, the processor of the portable electronic device can be configured to generate audio output based on the identified content, and present the audio output to the user via the audio interface.

In some embodiments, the processor of the iPhone can be further configured to determine a geographic location and can identify the content based in part on the geographic location and in part on the unique vehicle identifier received from the vehicle. In some embodiments, the identification can be further based on input received from the user. 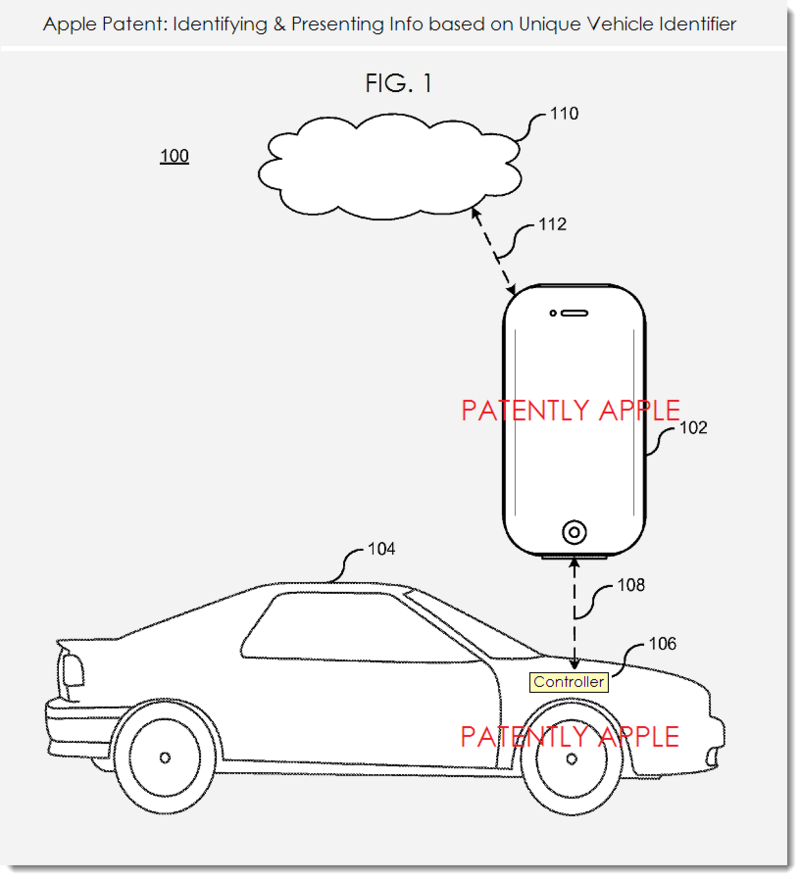 Apple's patent FIG. 1 illustrates system 100 which includes a portable electronic device 102, a vehicle 104, and an external data source 110 (such as iCloud).

Technically, the "Portable electronic device" can be, for example, a media player, a smart phone, a personal digital assistant, a tablet computer, a laptop computer, or any other electronic device that is portable (e.g., easily carried by a user from place to place) and capable of communicating with other devices.

Apple notes that the portable electronic device can receive a message from the vehicle including a unique vehicle identifier for the vehicle. For example, the unique vehicle identifier can be a VIN or one or more hash values corresponding to the VIN. A VIN is typically a unique serial number used by various vehicle industries to identify individual vehicles. The VIN can be assigned at the time of manufacturing, and can be determined by any suitable standard such as FMVSS 115, ISO 3779, SAE J853, ADR 61/2, or the like.

The App may require an Advanced Microphone

According to Apple, in some embodiments, the messages can be logically grouped into a "general" message set and an "optional" message set. Every accessory and every portable electronic device that use the accessory protocol can be required to support at least the general message set.

This message set can include messages enabling the portable electronic device and the vehicle to identify and authenticate themselves to each other and to provide information about their respective capabilities, including which (if any) of the messages in the optional set each supports.

In a way, Apple's new system could technically replace or compliment a vehicle's user manual.

Apple's patent FIG. 2 noted below is a simplified block diagram of a system including a portable electronic device and a vehicle. 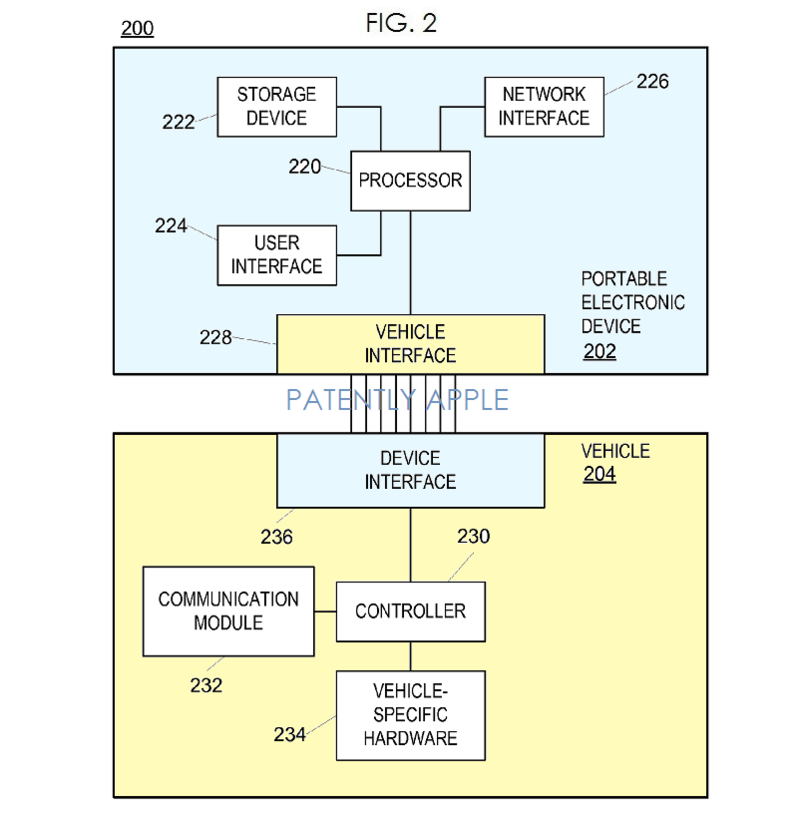 Apple's patent FIG. 5 is a flow diagram of a process usable by a portable electronic device to identify content based on a unique vehicle identifier, user input, and a geographic location of the device. 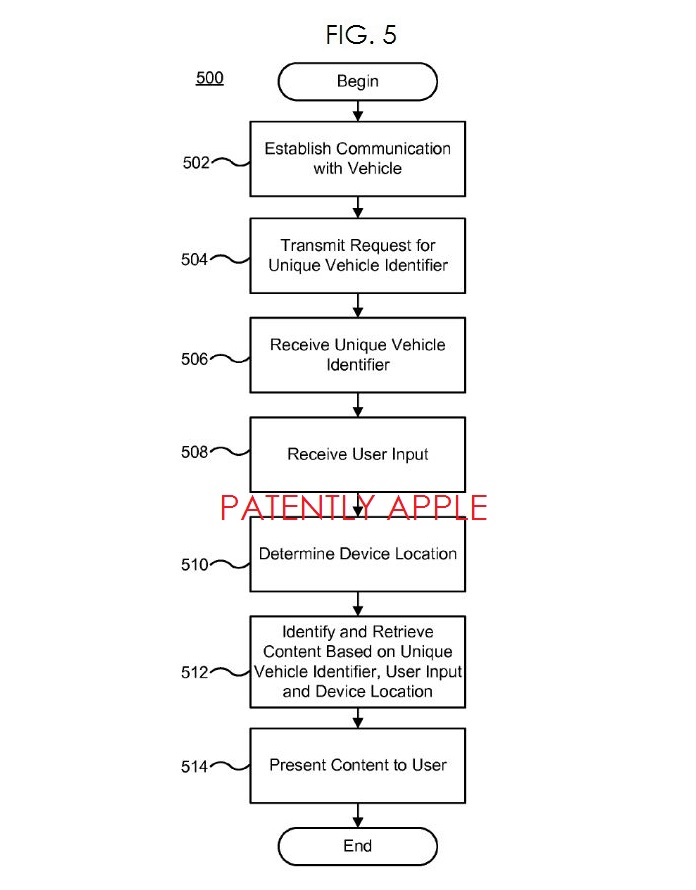 Apple credits Shailesh Rathi and Robert Walsh as the inventors of patent application 20140077972 which was originally filed in Q3 2012.